Eastern
Munene faulted the “politicisation” of the proposed construction, saying some of his counterparts were challenging the project 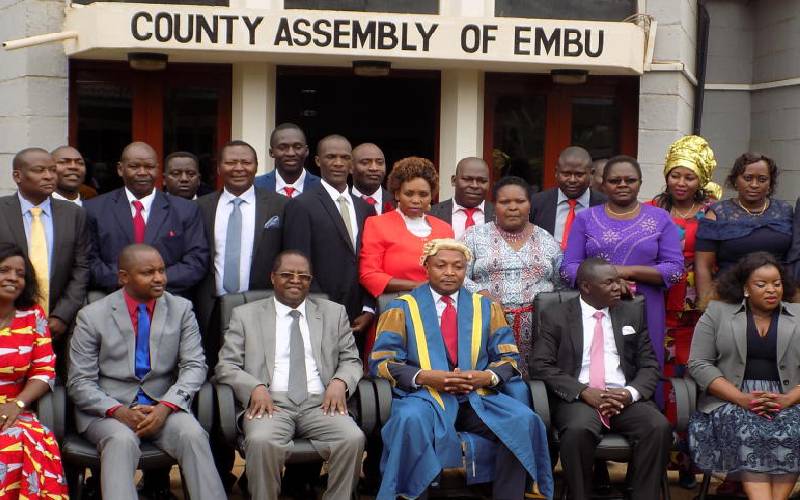 Embu MCAs have defended the inclusion of the county assembly office complex in the county’s annual development plan. Led by Deputy Speaker Steve Munene, the ward representatives said the county was incurring unnecessary costs in renting office space at the Ghanshyam Plaza in Embu town, yet the assembly had a plan to build an office complex that would accommodate all 33 MCAs and staff. Munene faulted the “politicisation” of the proposed construction, saying some of his counterparts were challenging the project as wasteful spending and inciting members of the public to reject it.

Speaking when introducing the report on the Annual Development Plan, Mr Munene, who is also the chairman of the Liaison Committee that scrutinised the document submitted by the executive, said the assembly recommended amendment to include the MCAs' office complex.

The deputy speaker observed that some of the assembly’s staff were working from iron sheet-walled offices due to inadequate space. “Paying Sh300,000 per month to rent extra office space for the last six years is equivalent to investing in a sinking fund,” he said. Construction of the ultramodern Sh335 million five-storey office complex, which would provide state-of-the-art offices for MCAs, was stopped in August 2015 after two residents went to court and obtained an injunction stopping the works on claims that it was a waste of taxpayers’ funds and that there was no public participation on the project. The two withdrew the case in March 2016.

However, the construction still did not kick off because a former MCA summoned the Ethics and Anti-Corruption Commission to investigate claims of flouting of tendering procedures and graft in the project. The assembly last month set aside Sh70 million to kick-start the construction of the office complex.