By Moses Njagih | 7yrs ago 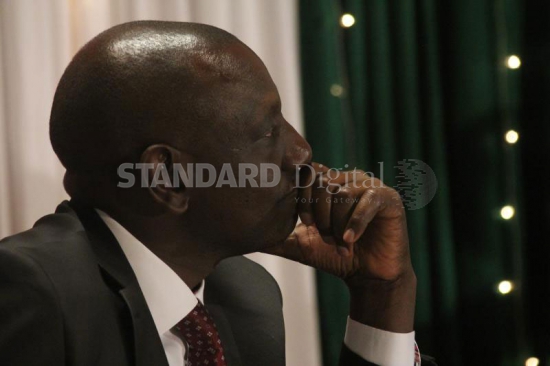 Deputy President William Ruto has been linked to a controversial Sh28 billion deal to put up a new referral hospital in Eldoret, with a Nairobi businessman claiming that there is a plot to fleece taxpayers of Sh11 billion in the deal.

The businessman, Herbert Ojwang', appeared before the National Assembly Public Investments Committee (PIC) and requested the committee chaired by Eldas MP Adan Keynan to investigate the matter, which he termed as a scandal to mint money for an individual.

Ojwang' claimed he was the brains behind the idea of upgrading the current Moi Teaching and Referral Hospital (MRTH) in Eldoret, a plan he said was later taken away from him under the instructions of the deputy president and transformed into a scandal.

The whistleblower, who tabled to the committee an audio recording and pictures he took with the DP, where he was allegedly coerced to pull out of the deal, said the original design and cost for the modernisation of the hospital was Sh17 billion.

He said the budget has since risen to Sh28 billion since it was taken away from him.

Ojwang' said it was Ruto who rejected his plan of upgrading MRTH to a 1,000 bed-capacity facility and in the process initiated the current plan of constructing a new hospital, which is now expected to cost the public Sh28 million.

"The agreement with whoever will win the Expression of Interests for construction of the new facility, which has since been advertised, is that the project will cost Sh17 billion. The balance from the Sh28 billion will go to someone, but I do not know who it is," he claimed.

The whistleblower also said that in the initial plan, he had negotiated with China WuYi, who were to undertake the upgrading of MRTH. He was to receive five per cent of the Sh17 billion, amounting to Sh850 million.

He told PIC that Ruto later proposed a new hospital at a different site from MTRH, which resulted to the hiving off of 200 acres of prisons land for the new 2,000 bed capacity facility, to be located only 15km from MTRH.

"I was told that the DP is against me being on the forefront of the whole deal. I asked the reason behind that and was told it is due to the close links with Raila. I met Senator Charles Keter who agreed to approach the DP to convince him that I proceed with the deal," he said.

Ojwang' claimed that when he declined to let go his championing of the plan, he was told to part with 50 per cent of his commission to Ruto, to which he agreed. He, however, said later realised the whole plan had been taken away and a new one had been initiated.

The businessman wants the MTRH chief executive officer to give the names of those who attended the meeting in Karen at the home of the DP on March 31, where the DP is alleged to have given instructions for the immediate conclusion of the project before the next financial year.

Ojwang' told the committee that with the mandate to oversee viability of public projects, he entered into an arrangement in April 2012 with Chinese companies- China Wu Yi, China Machinery Engineering Corporation (CMEC) and MTRH to co-ordinate the upgrading of the hospital.

In a document that he presented to the committee, he claimed he held his first meeting with MTRH Chief executive John Kibosia. Thereafter, a series of meetings between him CMEC, China Wu Yi and Kibosia followed. He said they visited China and when they came back, they went to Ruto's office since he wanted to meet them.

"Later on, another meeting was called and I was told that the DP had given instructions that I surrender the agreement document signed between me and the Chinese companies to Ruto's aide, Caleb Kositany," he said.

By Nathan Ochunge 25 mins ago
Premium Who will tame the cancer monster?

By Mike Kihaki 25 mins ago
Premium Where former regional commissioners have been taken to
.