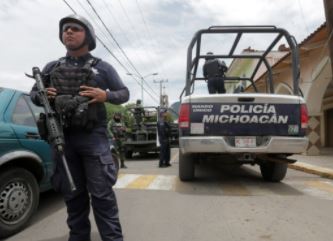 Mexican officials have arrested a dozen police officers for suspected involvement in the massacre of 19 people in the northeastern state of Tamaulipas last month, state prosecutors said on Tuesday.

Irving Barrios, attorney general of Tamaulipas, told a news conference investigations showed at least 12 state police were likely involved in the killings in the municipality of Camargo.

A spokesman for state police confirmed the arrests, but declined to comment further, pointing Reuters to the statement made by Barrios.

Authorities have so far identified two Guatemalan migrants among the 19, whose bodies were found badly charred in a bullet-riddled, burnt-out vehicle.

Guatemalan families said they feared more loved ones trying to reach the United States were among the dead.

The massacre caused renewed consternation in Mexico about perils faced by migrants, many of whom suffer abuses on the journey north from impoverished Central American countries.

If the involvement of law enforcement officials is confirmed, the case would echo the abduction and apparent massacre of 43 student teachers in the southwestern city of Iguala in 2014 by corrupt police working with a drug gang.

President Andres Manuel Lopez Obrador has vowed to put an end to killings and kidnappings by authorities, but ties between security forces and organized crime have been hard to stamp out.

More than a dozen of the victims are believed to be from Guatemala’s highlands, a region hard hit by the impact of the coronavirus pandemic and by extreme weather last year.

Also among the dead was the Mexican owner of one of the burnt-out pickup trucks found at the scene, prosecutors said. The truck had been impounded weeks before during the detention of 66 migrants in the neighboring state of Nuevo Leon, but was later released to the owner, identified only as Jesus M.

Daniel P., another of the Mexican victims, was a known migrant smuggler, prosecutors said.

The attack took place in a rural area along the busiest stretch of the U.S.-Mexico border for illegal crossings.

Every year tens of thousands of migrants, many from Central America, move through the region under the watch of guides who pay cartels for permission to transit. The lucrative routes are disputed by splinters of the Gulf Cartel and feared Zetas gang.

Investigators believe the victims were part of a larger convoy that included other vehicles carrying migrants, including Salvadorans, and another with armed men aboard apparently for protection.

The detained police appeared to have altered the scene of the crime, removing ammunition casings, prosecutors said. The police report and information the suspects gave in interviews did not match phone records and location data, they added.