US Supreme Court justices appear unlikely to throw out Obamacare 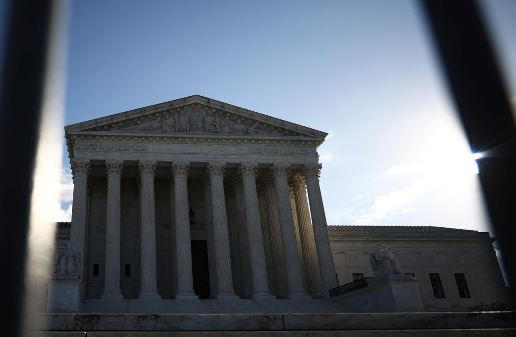 U.S. Supreme Court justices on Tuesday signaled they are unlikely to strike down the Obamacare healthcare law in a legal challenge brought by Texas and 17 other Republican-governed states and joined by President Donald Trump’s administration.

Chief Justice John Roberts and fellow conservative Brett Kavanaugh indicated skepticism during two hours of arguments in the case toward the stance by the Republican challengers that the entire law must fall if a single key provision, called the individual mandate, is deemed unconstitutional.

That provision originally required people to obtain insurance or pay a financial penalty. Trump signed a law in 2017 that erased the penalty, a change that Republicans then argued eliminated the constitutional justification for the provision as permissible under the power of Congress to levy taxes.

Roberts asked questions suggesting that because Congress did not repeal the entire law, formally known as the Affordable Care Act (ACA), when it eliminated the penalty, all of Obamacare should not be invalidated due to this one change.

If Roberts and Kavanaugh join the court’s three liberals in the court’s eventual ruling due by the end of June, the bulk of Obamacare would survive.

“It’s hard for you to argue that Congress intended the entire act to fall if the mandate was struck down,” said Roberts, who authored 2012 and 2015 rulings that upheld Obamacare in previous Republican legal challenges.

The justices heard arguments by teleconference in an appeal by a coalition of 20 states including Democratic-governed California and New York and the Democratic-controlled House of Representatives hoping to preserve Obamacare. The court, with three Trump appointees including Kavanaugh, has a 6-3 conservative majority.

After the arguments, President-elect Joe Biden, who served as Obama’s vice president, criticized the “right-wing ideologues” who pursued the “simply cruel and needlessly divisive” litigation.

“This argument will determine whether (the) healthcare coverage of more than 20 million Americans who acquired it under the Affordable Care Act will be ripped away in the middle of the nation’s worst pandemic in a century,” Biden told reporters in Delaware.

Citing a “moral obligation to ensure that here in America healthcare is a right for all and not a privilege for a few,” Biden promised to start building on the Affordable Care Act immediately after succeeding Trump on Jan. 20.

Obamacare expanded public healthcare programs and created marketplaces for private insurance. Without Obamacare, Biden noted, insurers could once again refuse to cover people with any pre-existing medical conditions such as diabetes, cancer, asthma or complications from COVID-19.

Roberts and Kavanaugh appeared to agree that the mandate to obtain insurance can be separated from the rest of the law.

“We ask ourselves whether Congress would want the rest of the law to survive if an unconstitutional provision were severed,” Roberts said.

The fact that Congress in 2017 left the rest of the law intact “seems to be compelling evidence,” Roberts added.

Kavanaugh added that “this is a fairly straightforward case for severability under our precedents, meaning that we would excise the mandate and leave the rest of the act in place.”

The justices - conservatives and liberals alike - raised questions over whether Texas and the other challengers had the proper legal standing to bring the case, worrying about similar scenarios in which someone might be able to sue over some other government mandate when no penalty exists.

Roberts said such a stance “expands standing dramatically” by enabling people to challenge a whole host of laws without experiencing direct harm.

Justice Amy Coney Barrett, Trump’s most recent appointee, asked skeptical questions about legal standing. Democrats, ahead of Barrett’s Senate confirmation last month, focused their opposition to her appointment on the Obamacare case, fearing she would vote to strike down the law. Her questions did not indicate she would.

The 2012 ruling authored by Roberts defined the individual mandate’s financial penalty as a tax, thus finding the law permissible under the Constitution’s provision empowering Congress to levy taxes.

The 2017 Republican-backed change eliminating the penalty meant the individual mandate could no longer be interpreted as a tax provision and was therefore unconstitutional, the Republican challengers argued in their lawsuit filed in 2018.

Texas-based U.S. District Court Judge Reed O’Connor in 2018 ruled that Obamacare was unconstitutional as currently structured following the elimination of the penalty.

The New Orleans-based 5th U.S. Circuit Court of Appeals last year also found the mandate unconstitutional but stopped short of striking down Obamacare. The Democratic-led states and House then appealed to the Supreme Court.