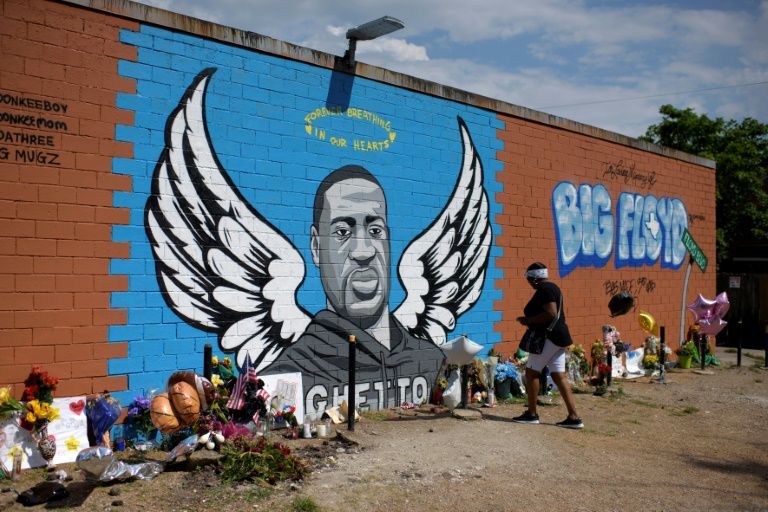 George Floyd said he couldn't breathe more than 20 times, called out for his children and late mother and said officers would "kill" him before he died in Minneapolis police custody, new evidence showed. Floyd, a black man, died on May 25 when a white police officer knelt on his neck for nearly nine minutes. His death has unleashed a massive wave of protests against systemic racism and police brutality in the United States and inspired demos across the world. Video of his death went viral and showed Floyd shouting "I can't breathe" and calling for his mother as he suffocated.

But transcripts of the police officers' body camera footage, filed Tuesday in Minnesota state court by Thomas Lane, one of the officers involved in Floyd's death, has revealed new details about his final moments. When the officers first arrested him, Floyd begged them not to put him in the police car, telling them he was claustrophobic and in physical distress. As they tried to force him into the car, Floyd cried out that he couldn't breathe and was "going to die in here." Later, according to the transcript, he said, "Momma, I love you. Tell my kids I love them. I'm dead." He called for his mother and children several more times. Throughout his arrest, Floyd said "I can't breathe" more than 20 times. The officers can be heard telling him to "relax," and that he was doing "fine" and "talking fine."

At one point, as Floyd insisted they were going to kill him, officer Derek Chauvin shouted, "Then stop talking, stop yelling, it takes a heck of a lot of oxygen to talk." - 'I can't breathe' - According to the transcript, Floyd's last words were, "They're going to kill me. They're going to kill me. I can't breathe." The transcript was submitted Tuesday by Lane to have the charges that he aided and abetted in Floyd's murder thrown out by a judge. He and the other three officers involved -- Chauvin, Tou Thao and Alexander Kueng -- were all fired from the Minneapolis police force one day after Floyd's death and charged in his murder. They each face up to 40 years behind bars.

Chauvin, who knelt on the handcuffed 46-year-old's neck, faces second and third-degree murder charges. Thao and Kueng, like Lane, have been charged with aiding and abetting a murder. The bystander video of Floyd's death stunned and horrified Americans, igniting protests and riots in cities across the country and sparking a national debate on racism and police violence. Floyd was detained for the minor charge of attempting to use a counterfeit $20 bill, and while in handcuffs, two of the officers held him down on the street while Chauvin pressed his knee to Floyd's neck and the fourth officer stood watch.