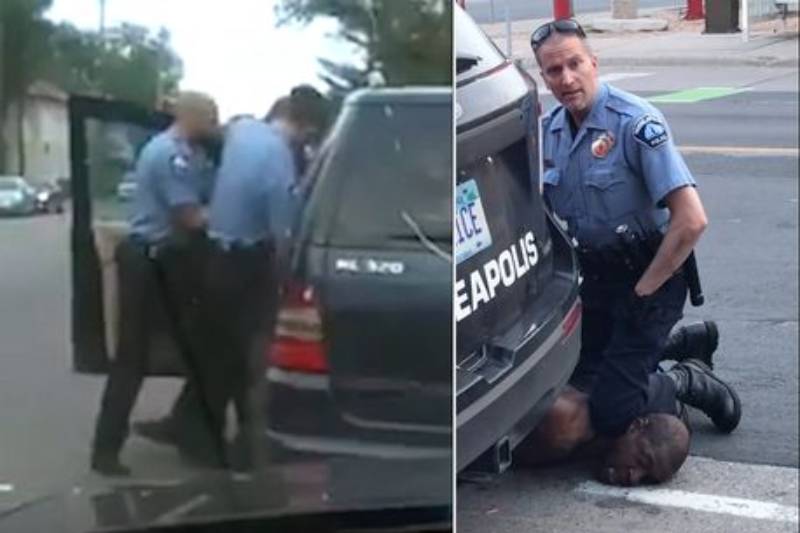 A new video shows George Floyd not resisting arrest as police officers dragged him from his car before he was killed.

It comes after the Minneapolis Police Department released a statement claiming the 46-year-old "physically resisted officers" after being ordered to exit his car, before "suffering medical distress".

However, the clip appears to show Mr Floyd complying and not resisting as two officers pull him from his car and cuff him.

The initial video, which emerged on Tuesday, shows Mr Floyd gasping for air and groaning, "I can't breathe," as an officer pins him down with a knee to his throat.

Bystanders beseech the officer to let him up before he appears to lose consciousness, with the video causing a national outcry.

And the latest footage, filmed from inside the vehicle behind Mr Floyd's, shows him being pulled out of his car by multiple officers and put in handcuffs.

While separate CCTV footage from a nearby restaurant shows him later sitting on the ground, his hands cuffed behind his back, before being brought to his feet and pushed into a wall.

It also emerged that veteran officer Derek Chauvin, 44, who was seen kneeling on Mr Floyd's neck, was investigated over the fatal police shooting of Ira Latrell Toles in 2006.

During a domestic call, Toles was shot and wounded by Chauvin after he supposedly went for another officer's firearm.

Chauvin was also one of six officers at the scene when Wayne Reyes, 42, was shot dead after allegedly pulling a shotgun on them, reports The Star Tribune.

While a second officer involved in Mr Floyd's arrest, Tou Thao, was part of a $25,000 out of court settlement after being sued for using excessive force in 2017, reports the Daily Mail.

The four involved in the apprehension, were dismissed from the police force on Tuesday, the day after the deadly incident unfolded in Minnesota's largest city.

The city identified them on Wednesday, which also includes rookies Thomas Lane and J Alexander Kueng.

"Why is the man who killed George Floyd not in jail? If you had done it or I had done it we would be behind bars right now," Frey said during a news briefing.

"I am calling on Hennepin County Attorney Mike Freeman ... to charge the arresting officer in this case."

While Mr Floyd's sister Bridgette has also called for justice for her brother, saying the sackings were not enough.

She told ABC's Good Morning America: "They murdered my brother. They killed him. They need to apply more pressure on these guys. Firing them is not enough."

The Police Officers Federation of Minneapolis, the union that represents the city's police force, said in a statement to local media the officers were cooperating with the investigation and it was "not time to rush to judgment."

"We must review all video. We must wait for the medical examiner's report," the union said, asking the community to remain calm.

Frey did not specify what charge he thought was appropriate for the officer, but said he has relayed his wish to Freeman, the prosecutor in the county where Minneapolis is located.

On Tuesday, the Hennepin County Attorney's Office said it would make a charging decision after the state's Bureau of Criminal Apprehension and the Federal Bureau of Investigation conclude investigations.

President Donald Trump said on Wednesday the Justice Department and the FBI are investigating the case.

"At my request, the FBI and the Department of Justice are already well into an investigation as to the very sad and tragic death in Minnesota of George Floyd,"Trump said on Twitter.

"I have asked for this investigation to be expedited and greatly appreciate all of the work done by local law enforcement," he said.

Asked about the incident while at Cape Canaveral, Florida, for SpaceX's first astronaut launch, he had called it a "very, very sad event."

The case is reminiscent of the 2014 killing of Eric Garner, an unarmed black man in New York City, who died after being put in a police chokehold and telling the officers, "I can't breathe."

The officer who placed Garner in a fatal chokehold was fired but not criminally prosecuted.

The Garner case was one of a series of killings of black men by U.S. police officers that fueled the "Black Lives Matter" movement, which campaigns against violence toward black people and systemic racism.

On Tuesday thousands of protesters filled the streets around the scene of the deadly incident, a rally that took an unruly turn around dusk.

Police in riot gear fired tear gas and non-lethal bean-bag rounds into the crowds, while protesters hurled water bottles and other projectiles, the Minneapolis Star-Tribune reported.

A protest was planned for Wednesday in front of the home of a police officer organisers say was involved in the incident, according to a posting on Facebook.

The organiser said a peaceful protest was planned, but the officer will "feel our pain and what it's like to be afraid for his life."

Some hotels have resorted to shutting down and suspending operations due to a reduction in the number of guests at the facilities.