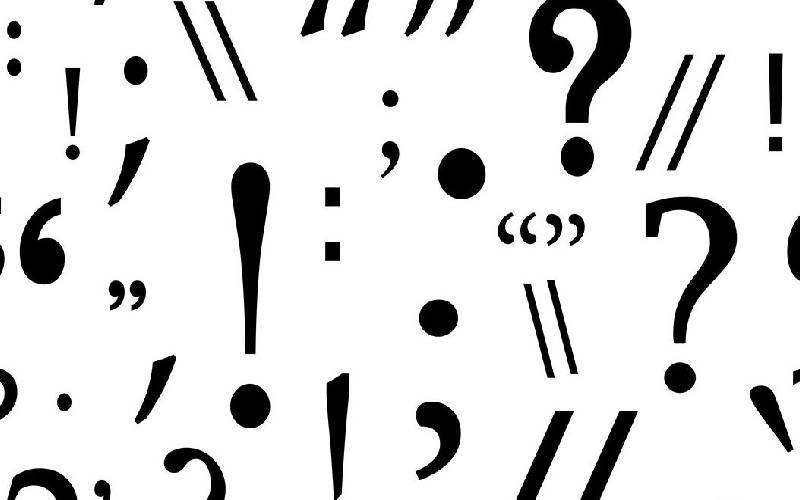 The period (full stop) is perhaps the only punctuation mark that learners and those versed in the English language use correctly.

On the other hand, the most misused punctuation marks by both learner and versed are the comma, semi and full colons.

Journalists fall in the category of the versed because English is the language of their trade. The expectation is that they have mastered the language enough to communicate effortlessly in it.

Yet some of the grammatical errors found in newsprints are so bad and too many, they are inexcusable.

On account of that, a regular reader of this column sent me an email last week questioning the use of semi and full colons before a reported speech.

Inter alia, he wrote, “I am an avid reader of your column that educates us on correct usage of English language punctuation, phrases, etc. My concern is the use of full and semi colon before quoting what a person said. Some articles are written like, the DP said: “There is going to be a Jubilee candidate...”  (Thus using a full colon). Others will use a semi colon - The DP said; “There is .....”. What is the correct punctuation?”

Depending on whether the sentence is long or short; whether the quote in question is a direct object of a verb or whether it is a quote giving information, statistics or coordinates, there is a very thin line between comas, semi and full colons; so thin as to be obscure. However, there are basic rules to guide us.

Where two or more similar clauses are used to form compound sentences, the proper punctuation mark to use is a coma. For example: “He walked in, she walked out”.

When the clauses are not joined by a conjunction, the proper punctuation mark  to use in joining them is the semi colon. For example, “The Senate and National Assembly never cease to amaze; they are always at each other’s throat”. This sentence can be broken into two by inserting a period in the same place where the semi colon lies.

If it is necessary to join two clauses, and the second starts with an adverb (word that modifies a verb, adjective etc) use a semi colon. For example, “The driver reported late and drunk; then couldn’t remember where he had kept the ignition key”.

However, if a conjunction is used to join two independent clauses, the proper punctuation mark to employ is a coma. For example, “Listening to Sonko speak in public functions is exhilarating, for he is full of surprises”.

A full colon is normally used at the end of a clause to tell the reader that what comes after it (colon) is related to the preceding clause. By this I mean that the second clause either builds on the first or gives an explanation of the first clause.

For example, “True journalists require four attributes: honesty, courage, patience and drive”. It is wrong to use a colon to separate verb from complement or preposition from its object. For example “He was walking: down the main street” (He was walking down the street).

In cases where a quote is the direct object of a verb, use a comma instead of a semi colon and remember to enclose the verbatim transcript in quotation marks. For example, “Whenever the odds seem stacked against me, I remember the biblical teaching, “Cast all your anxiety on him because he cares for you”.

Note, however, that when a quote is preceded by the word ‘that’, it becomes an indirect speech hence, should not be enclosed in quotation marks. For example, “President Kenyatta said that we should stop early campaigns and bad-mouthing to build a strong country”.

Where a quote gives evidential information, the information should be introduced by a full colon and enclosed in quotation marks. For example, the police gave the following to help the public in identifying the most wanted criminal: “He is six feet tall, has a scar on his left cheek, walks with a limp that favours his right leg and is armed”.

Having said this, it is easy to see that when reporting what someone said, depending on the structure of the sentence, we need either a comma or semi colon. To use a full colon is bad form.

The body of a woman of Asian origin, was recovered miles away at Suswa town