How couples' training brought peace and progress to Pokot homes

It is 5.45 on a chilly morning in the small village of Makutano in the hilly Batei ward of Kapenguria, West Pokot.

We find a jovial Selina, a mother of 10, preparing her seven children to go to school. She has been up since 5am.

When her children leave for school, she will get to work on their slopey two-acre farm which she has to plough, harrow and plant all by herself.

Occasionally, her children would help her out but not today.

Selina's husband, Pastor David Roron, says traditionally, this is how things were meant to be.

“These were the duties of a Pokot woman which she had to do faithfully without complaining generation after generation,” he explains adding that, traditionally, it was his wife's duty to bear as many children as she could for him.

Selina adds that a woman had no rights to property. “As a woman, I had no power over the control of the family affairs because a woman is voiceless not only in her household but also before other men in barazas," she says.

“In fact when harvest came, my husband would go and sell the farm and dairy produce without informing me, and I could not dare ask how much was sold, at what price, or what he did with the money,” she says.

She abhors the fact that she had to drop out of school, undergo female genital mutilation (FGM) and be married off at an early age, and be relegated to bear as many children as she could for her husband.

Growing up, she was among the brightest pupils in school and looked forward to furthering her education especially after passing her KCPE exam. She even had a donor willing to pay school fees for her to study in Canada.

However, her father was of a different opinion. She was to go for FGM, and soon after, he would marry her off. He had identified a husband for her even though she was just 15 years of age. Such was the Pokot custom. It did not recognise the right of a girl’s education or property.

It was not easy being married off at an early age and to a husband who believed in cultural practices, Monica says. The cultural norms were such that she and her children would work hard on the farm, but come harvest time, her husband would sell all the products without the courtesy of informing her.

Monica says what hurt her most was the fact that her father opted to marry her off immediately after her KCPE, forcing her to first undergo FGM.

“I hated the terrible customary rites and culture that I knew was not fair to women and girls and loathed my father (she later forgave him after the WEE-CSA training) for doing these things to me even after I had got a sponsor who wanted to take me to Canada,”  says the mother of ten. She says, deep inside her, she knows she would have studied to become a principal.

In Kalemrekai Village, Riwo Ward, Milkah Chepkemoi has a story that is a replica of Selina and Monica's. She dropped out of school in Form Three when she was 17 years old. She was then married off by her father". He claimed it was so that he could pay school fees for her my brothers but Milkah says he ended up using the money to sustain his drinking lifestyle.

“My father, like many Pokot men, did not believe in the education of the girl child. This meant that my mother had to pay school fees for my last-born sister and me by selling vegetables," says  MIlkah who is now a mother of seven boys and five girls at 32 years.

Soon the struggle was too much for her mother after her father resorted to heavy drinking. Her father married her off to a family he thought was wealthy to benefit from the dowry.

Her marriage was the beginning of a nightmare that lasted for over 10 years. According to her husband (he did not have any livestock), she was a homemaker and her traditional role was household chores and farming.

With time, she believed in her destiny as a Pokot woman and settled down to perform her role faithfully. Meanwhile, her husband would disappear for months, “only to come back to add another child.”

A wave of change

The year 2020 will forever remain in the minds of these three women. They were introduced to Women Economic Empowerment - Climate-Smart Agriculture (WEE-CSA), a project by UN Women, in partnership with FAO, the County Government, and other stakeholders.

The three women with their 30-member groups were marked as beneficiaries of the four-year project.

Selina says she will forever be grateful for the day she enrolled for training. “Apart from being taught how to practice new methods of farming (CSA), how to save money and, keep records, we were asked to bring along our husbands during some training sessions,” she says.

At the onset, the three women report that their husbands were reluctant to join the training, but after a visit by the trainers, they gave in.

“The sessions were interesting and there were other men, and the trainers taught us that in keeping to the traditional culture such as FGM, marrying off our daughters at an early age and not involving our wives in family decisions was detrimental to the progress and the well-being of the family,” says Selina's husband Pastor Roron.

Monica and Milkah report similar results – slow but effective behavioral changes from their husbands who previously were unchangeable in matters of traditions.

Today, less than two years into the training, with the change of behaviour, and support from her husband, Milkah owns 50 improved goats, and three dairy cows and poultry. She also runs a posho mill at Kacheliba town.

With the freedom to participate in decision-making, these couples are enjoying relatively prosperous lives.

Monica recalls how her husband would previously sell off the chicken, milk, onions, and other crops without informing her.

With the support from her peer table-banking group members, all of whom had participated in the training on gender, she did not falter from the teaching that a wife is also part of the family and should be involved in decision-making. She was adamant that there was no turning back to the hurtful cultural practices.

Almost two years down the training, the three women and their spouses read from the same script.

They are involved in CSA farming and have harvested their first batch of onions -- a first since using CSA. They have dairy cows and poultry and, above all, their children are in school. They can also sustain their families both in feeding and meeting their other financial needs.

Couples now engage in discussions before making decisions. All three are representative of the “bigger picture of what is happening across the three wards.

Most beneficiaries have upgraded their lives and homes. The targeted households agree that women are good decision-makers, they are now financially free; free from cultural norms, free from FGM, and free from early marriages. Girls have access to education and can inherit property and their food security has improved.

The programme Manager reports that the project has so far touched 809 households, targeting 80 per cent women representation, and 20 per cent men. Funded by the Korea International Cooperation Agency (KOICA), the WEE-CSA project’s overarching goal is to enhance gender sensitive adaptive capacity of West Pokot County to climate change and strengthen the women’s capacity, and meaningfully engage in climate-smart agriculture.

According to Mercy Tumkou, Project Manager, WEE-CSA is slowly changing this landscape through interactive training. Village Enterprise is implementing the four-year project (2021-2024).

“the project has been rolled out in the Arid and Semi-Arid Land (ASAL) counties of West Pokot, Laikipia, and Kitui.

Court told 31 polling stations in Wajir contest had irregularities
North Eastern
By Kamau Muthoni
11 mins ago
France to make condoms free for anyone under 25, Macron says
Europe
By AP
15 mins ago
Croatia coach Dalic: This is what we did to beat Brazil in World Cup quarterfinal
Football
By Xinhua
36 mins ago
Premium Here are some hard truths for the Azimio leadership
Ken Opalo
By Ken Opalo
40 mins ago
. 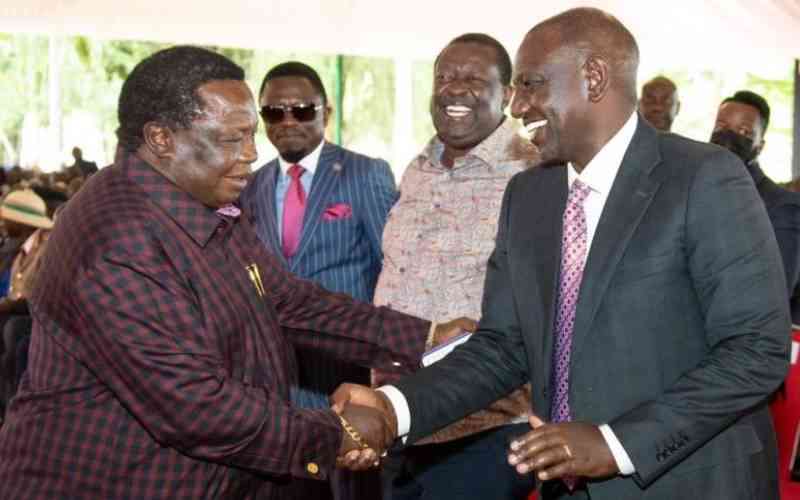