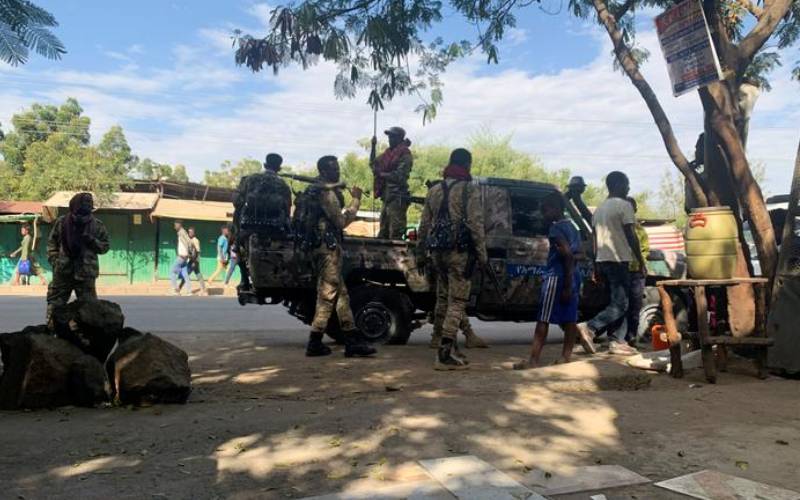 Government forces seized bows and arrows and other weapons from the armed men, Fana said in its report that cited unnamed regional officials. It did not say when the clash took place or which group was involved.

Prime Minister Abiy Ahmed said on Thursday he was sending forces to Benishangul-Gumuz, which borders Sudan, the day after unidentified attackers torched homes and killed more than 100 people in a village there.

Ethiopia has been grappling with outbreaks of deadly violence since Abiy was appointed in 2018 and accelerated political reforms that loosened the state’s iron grip on regional rivalries.

Elections due next year have further inflamed rivalries over land, power and resources.

The latest violence comes as Ethiopia’s military has been battling a rebellious force in the separate northern Tigray region, with a mass deployment of troops that has raised fears of a security vacuum in other areas.

“The massacre of civilians in Benishangul-Gumuz region is very tragic,” Abiy said on Twitter. “The government, to solve the root causes of the problem, has deployed a necessary force.”

Thousands of people fled the village and slept in the forest or in schools, Ethiopian Red Cross volunteer Mesfin Mesele told Reuters by phone on Thursday.

Mesele said he went with soldiers to collect bodies late on Wednesday and found 93 corpses on one road into the village.

“There are still bodies to be collected,” he said.

Two medics in the area told Reuters they had heard reports of fresh clashes in two other nearby areas, but had no details. They said they treated people with gunshot and knife wounds.

It was not immediately clear who was responsible for Wednesday’s attack or who was targeted.

The region is home to several ethnic groups. In recent years, people from the neighbouring Amhara region have started moving into the area, prompting some ethnic Gumuz to complain that fertile land is being taken away, experts say.

Some Amhara leaders have said publicly that some of the land - especially in the area where the violence occurred - historically belongs to them, which the Gumuz dispute.

The human rights commission said survivors it spoke to believed most of the victims were from the Shinasha group. Reuters interviewed one survivor who was Shinasha and one who was Amhara.

State-run Ethiopian News Agency reported that five senior officials, including a state minister of the federal government, have been arrested in connection with security issues in Benishangul-Gumuz. It did not go into further detail on specific accusations or charges.