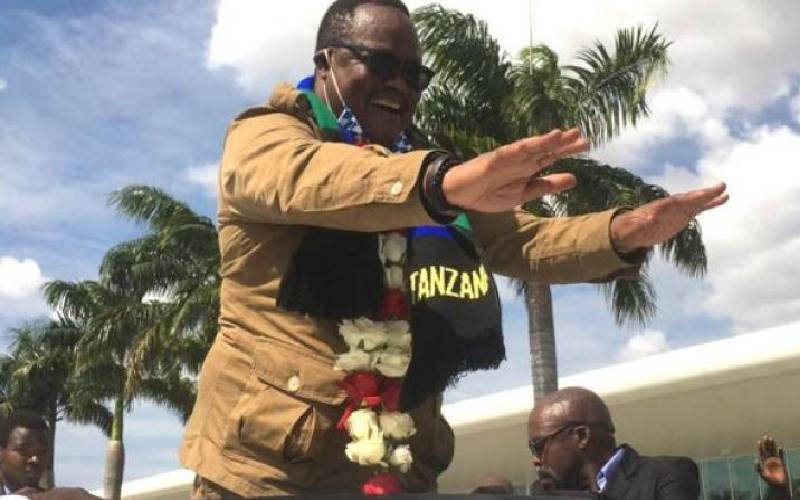 Tanzania opposition leader Tundu Lissu (pictured) has said his office has been firebombed.

The Chadema party office in Arusha was destroyed on Thursday night, a few hours before he was set to visit the area, the BBC reported.

Terming the incident "terror and intimidation", Lissu added that his visit would not be postponed.

He went on, "no amount of intimidation will stop this tsunami of change".

Why the likelihood of Lissu ruling TZ is low

The rise of Suluhu and 10 other female leaders in Africa

Our Northern Zone party HQ in Arusha has been firebombed and destroyed on the eve of my arrival in Arusha. Today's timetable remains unchanged. No amount of terror and intimidation will stop this Tsunami for change in Tanzania. Arusha here we come ????? #SasaBasi #TunduLissu2020 pic.twitter.com/uGYbJJ0ikd — Tundu Antiphas Lissu (@TunduALissu) August 14, 2020

Back-from-exile Tanzanian firebrand opposition politician Lissu has been nominated as the Chadema presidential candidate for the October polls with an overwhelming majority.

Lissu, who was battling it out with Lazaro Nyalandu and Dr Maryrose Majinge, garnered 405 votes out of the 442 votes cast. Nyalandu came second with 36 votes while Dr Majinge managed to garner only one vote.

The former Singida East MP will now battle it out with the incumbent John Pombe Magufuli who will be seeking to be re-elected for a second term using Chama cha Mapinduzi ticket.

Magufuli, commonly known as the ‘bulldozer’ in Tanzania came to power in 2015, taking over from Jakaya Kikwete.

With the presidential elections nearing on October, the new law suggests that all foreign correspondents will not be able to work with local journalists and fixers unless a state official is with them wherever they go.

We’re ready to cooperate, hug you: Suluhu to Kenyans
Feedback