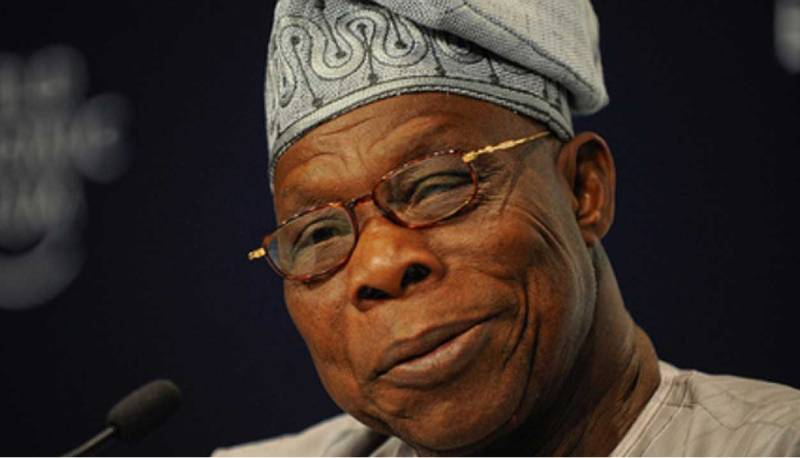 African traditions forbid speaking ill of a dead person. No matter their moral decadence in the society before their death, you keep mum.

The norm is that people shower praises on the departed soul, of the good deeds, of the values, even if looking for one positive act would be like looking for a needle in a haystack.

Even if they were thieves, murderers, or rapists, the book says thou shall rather keep your mouth shut, or keep off, not to err and fall into the ditch of taboos that are followed by strings of curses and misfortunes.

However, it is not so, for the former Nigerian President Olusegun Obasanjo. The bad blood between the former head of state and his former Senator Buruji Kashamu, seemingly continuing, and the former head continues the onslaught even in death.

In his letter of condolence to the family of the late Kashamu, who succumbed to Covid-19, on Saturday, August 8, 2020, Obasanjo sent a rather shocking, yet hilarious message.

“No legal, political, cultural, social, or even medical maneuver could stop the cold hand of death, when the creator of all of us says the time is up…” said Obasanjo.

The letter just proved how far the retired president was willing to go with his fight with his political nemesis, who was a thorn in the flesh to him in his years of leadership.

The former Chief gave a detailed eulogy of the late senator painted in black and white, accusing him of criminal offenses and swindling the law in countless instances, to escape unscathed.

“In his lifetime, he used the maneuvers of law and politics to escape from facing justice on alleged criminal offenses in Nigeria and outside Nigeria,” added Obasanjo. 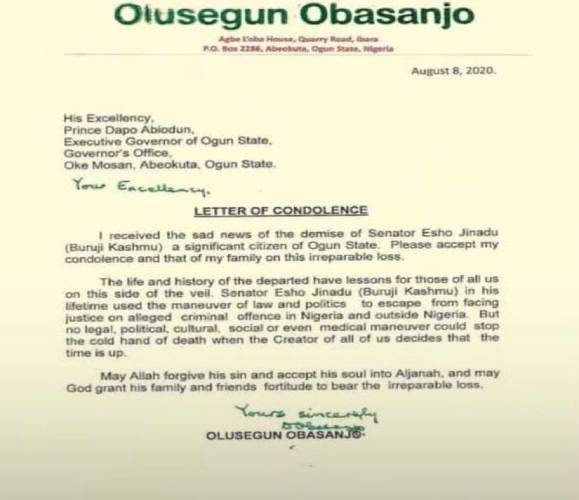 In the end, Obasanjo, paid some respect to the traditions, urging the living to learn from the wicked ways of his old enemy.

“The life and history of the departed have lessons for those of us on this side of the veil,” he said.

However, the ‘condolence’ message didn’t sit well with some netizens, creating a blast on social media, some accusing Obasanjo of being unforgiving.

“Even when his foes die, it appears Obasanjo doesn’t forgive,” tweeted one agitated citizen.

“If this was from God, it'd have been very understandable. But it's more disturbing to have these words come from a mere mortal. Baba, don't worry, you'll live forever,” said another one.

“Senator Buruji Kashamu in his lifetime used the maneuver of law and politics to escape from facing justice on the alleged criminal offense in Nigeria and outside Nigeria,” wrote Obasanjo in the letter of condolence.

“Can Obasanjo say in good conscience that he did not at some point collaborated with Kashamu and most of the things he (Kashamu) did politically were not with his collaboration,” tweeted one Fayose, a former Governor.

The animosity between Obasanjo and the late Kashamu came over leadership differences of the People’s Democratic Party (PDP) party, which is a national party in Nigeria.

The member of the 8th Senate of Nigeria had held several leadership positions, in the PDP before his death.

His demise came as a result of a heart complication that was accelerated by the coronavirus, and was undergoing treatment with First Cardiology Consultants, Lagos.

Kashamu, 62, served as a Senator representing Ogun-East in the eighth National Assembly under the People’s Democratic Party (PDP).

He, however, was not new to controversy, in and out of PDP. One strong storm, including a fight for the control of PDP, one of the two top contemporary parties in Nigeria.

During the protracted court battle ten years ago, Senator Kashamu, clashed with former President Olusegun Obasanjo over the choice of the party chairman.

Obasanjo fronted Senator Dipo Odujurin, while Kashamu sponsored Bayo Dayo. At the end of the litigation, the court declared Dayo, Kashamu’s man, as the chairman.

The death of Kashamu, is just one of the demises of high profile individuals in Nigeria who have succumbed to Covid-19.

Pandemic gloom and the trouble with Kenya