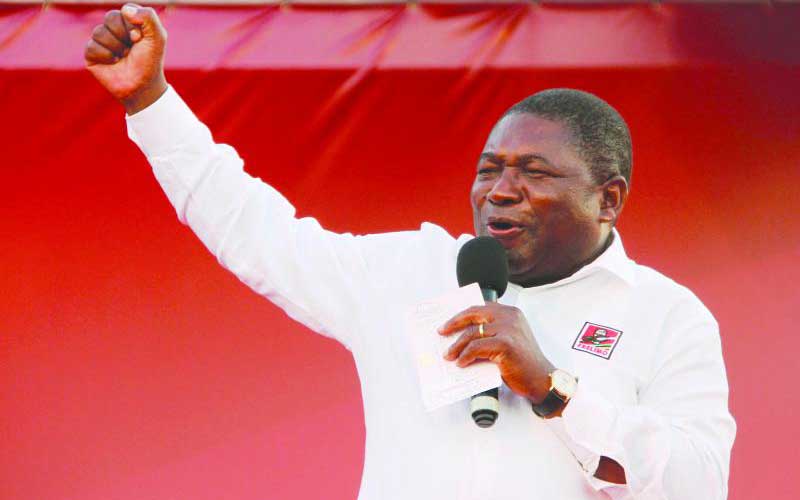 Mozambique's incumbent President Filipe Nyusi (pictured) has won 73 per cent of the vote in a presidential election, the National Election Commission (CNE) said, securing a landslide victory in a contest opposition parties say was marred by fraud and violence.

Ossufo Momade, the candidate for the main opposition party and former guerrilla movement Renamo, trailed behind with 21.88 per cent of the vote, Commission Chairman Abdul Carimo said at a news conference yesterday.

During his second five-year term, Mr Nyusi, of the ruling Frelimo party, will be responsible for overseeing a gas boom led by oil giants such as Exxon Mobil Corp and Total, battling an Islamist insurgency and delivering on a peace deal signed two months ago.

It was hoped the October 15 presidential, legislative and provincial poll could set the seal on the fragile deal, designed to put a definitive end to four decades of violence between Frelimo and Renamo, but instead the pact is at risk of falling apart as opposition parties reject the results. Frelimo says the elections were free and fair.

Nyusi was widely expected to triumph, but not by such a large margin. Daviz Simango, of the third-largest party, the Mozambique Democratic Movement, secured just over four per cent of the vote, with less than one per cent going to Mario Albino, who heads up smaller party AMUSI, according to the CNE.

Mr Simango said earlier yesterday that MDM sees the election outcome as "null and void", and demanded an audit of the process that it said was tarnished after electoral administration bodies manipulated the process from the outset.

Renamo has also already rejected the outcome after estimations based on numbers posted outside polling stations predicted a big win for Nyusi and Frelimo.

Nyusi was last week forecast to be heading for a landslide victory.

Some polling stations recorded many more votes than registered voters in the October 15 ballot, the Electoral Institute for Sustainable Democracy in Africa (EISA) said.

It said Nyusi would win more than 70 per cent of the vote against 21 per cent for opposition candidate Ossufo Momade, according to data from 2,500 polling stations.

Renamo last week rejected the outcome even before counting was done, decrying problems in the process from voter registration through to counting.

Analysts believe that could threaten the peace accord and in turn the stability of nation on the verge of becoming a global gas exporter.

EISA programme officer Domingos Rosario told a news conference that at many polling stations in seven provinces, the number of votes greatly exceeded the number of voters. He said some observers had been prevented from carrying out their work.

Two-thirds of polling stations had last week been processed, representing just over 36 per cent of the more than 13 million potential ballots from registered voters, according to data on the electoral commission's website.

Alice Nandja, 23, a law student, said definitive results should have been announced by last week, and the numbers were hard to explain.

"We will have to agree with Renamo," she said. "I don't think people are stupid enough to vote for Frelimo that much.

"The election should serve to legitimise the peace agreement, but it seems to have created more division within the Mozambican people," she added.