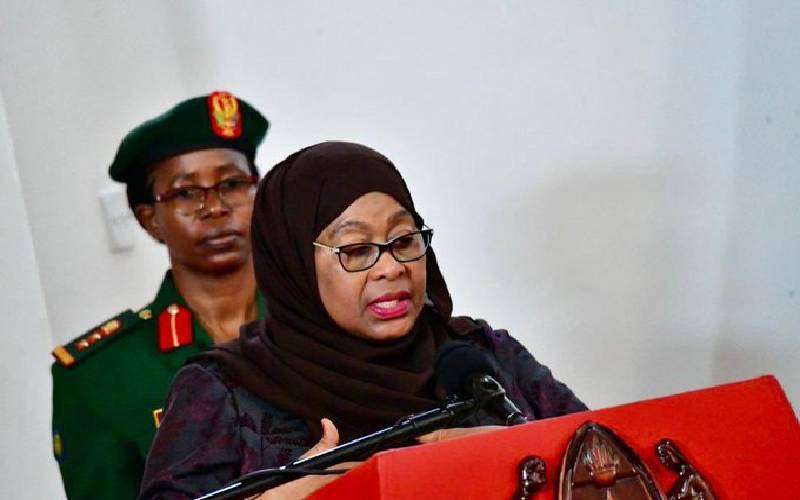 Tanzania President Samia Suluhu Hassan (pictured) has announced plans to set up a task force of experts to examine the country's Covid-19 measures.

She said the team will be guided by remedies suggested by the global health authorities to curb the spread of coronavirus.

Suluhu spoke at State House in Dar es Salaam on Tuesday after administering the oaths of new and reshuffled permanent secretaries and deputies.

"We can’t accept everything without a thorough research,” local media quoted her saying.

She said the world will no longer view Tanzania as a country that attacks the press and curtails media freedom.

Suluhu said there is a great need to cooperate with the international community on how to handle Covid-19.

Further, President Suluhu ordered the reopening of media houses that were previously banned or sanctioned by the former administration.

In a move that reopens press freedom, Suluhu cautioned the media to follow the law in its reportage.

Suluhu’s announcements come after her predecessor President John Magufuli was buried on March 26.

Regarding coronavirus, Magufuli did not speak the scientific truth, instead, he dismissed the severity of Covid-19.

He stopped updating his country’s case numbers, mocked countries that imposed lockdowns to contain the disease and instead urged Tanzania to rely on divine power against the virus.

Magufuli, who died in Dar es Salaam, at one point said the country would not allow any vaccines to be administered to its citizens, instead preferring herbal concoctions of ginger and lemon juice, and prayer.

In 2017, he warned the country’s journalists that there were limits to their press freedom, comments that added to opposition concern that his government was further narrowing the space for public criticism.

Magufuli made the remarks during the swearing-in of new Information Minister Harrison Mwakyembe, who was appointed in a reshuffle.

Critics said Mwakyembe’s predecessor Nape Nnauye was sacked as retribution for ordering a probe into an alleged raid on a private television station by a senior government official.

“I would like to tell media owners - be careful, watch it. If you think you have that kind of freedom, (it is) not to that extent,” Magufuli said at the time.

He ordered Mwakyembe to clamp down on media organizations that publish or broadcast material deemed to incite unrest, saying his government would not allow a few individuals to destabilize east Africa’s second-biggest economy, which is home to 50 million people.