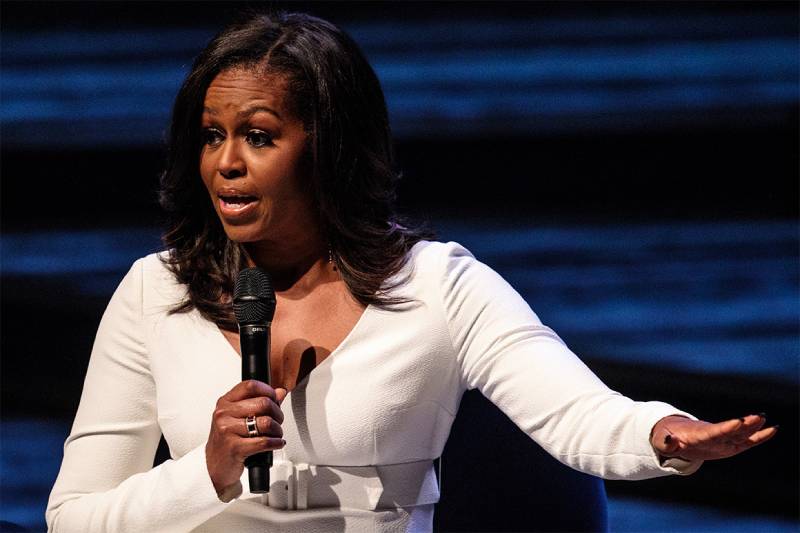 Former first lady Michelle Obama  (pictured) launched a blistering attack on President Donald Trump on Monday and urged Americans to elect Democrat Joe Biden in November to end the chaos she said had been created during the four years of Trump’s presidency.

In an impassioned speech capping the first night of the Democratic National Convention, Obama said the Republican Trump “has had enough time to prove that he can do the job” but had failed to meet the moment in a country reeling from the coronavirus pandemic, economic turmoil and racial injustice.

“Whenever we look to this White House for some leadership or consolation or any semblance of steadiness, what we get instead is chaos, division, and a total and utter lack of empathy,” she said, calling him “the wrong president” for the United States.

“He simply cannot be who we need him to be for us. It is what it is,” Obama said. “If you think things cannot possibly get worse, trust me, they can; and they will if we don’t make a change in this election. If we have any hope of ending this chaos, we have got to vote for Joe Biden like our lives depend on it.”

Obama, whose husband, Barack Obama, was in the White House when Biden was vice president from 2009-2017, capped a long parade of speakers, including some of Trump’s fellow Republicans, who gathered online to make the case for Biden at the start of his four-day nominating convention.

The harsh takedown by Michelle Obama, regularly cited in polls as one of the most popular figures in the Democratic Party, could generate the sort of voter enthusiasm some Democrats thought a virtual convention might lack.

The convention opened amid widespread worries about the safety of voting in November because of the pandemic. Democrats have pushed voting by mail as a safe alternative, but Trump without evidence has proclaimed it is prone to fraud and blocked emergency aid for the U.S. Postal Service to limit mail-in voting.

Obama referred to these concerns, saying those who could not win a fair election were trying to stop people from voting by closing polling places in minority neighborhoods, purging voter rolls and lying about the security of mail-in ballots.

“We have to vote for Joe Biden in numbers that cannot be ignored,” she said. “We have got to grab our comfortable shoes, put on our masks, pack a brown bag dinner and maybe breakfast too, because we’ve got to be willing to stand in line all night if we have to.”

“Joe Biden will end the hate and division Trump has created. He will stop the demonization of immigrants, the coddling of white nationalists, the racist dog whistling, the religious bigotry and the ugly attacks on women,” Sanders said.

The pandemic forced Democrats to overhaul the convention, largely eliminating the in-person gathering planned for Milwaukee, Wisconsin, and turning it into two-hour, prime-time packages of virtual speeches and events from around the country.

It featured discussions with voters who described their struggles confronting the virus and coping with the slumping economy and healthcare.

Kristin Urquiza, who lost her father to COVID-19, blamed Trump’s mismanagement of the pandemic for his death.

“My dad was a healthy 65-year-old. His only pre-existing condition was trusting Donald Trump, and for that, he paid with his life,” she said. “When I cast my vote for Joe Biden, I will do it for my Dad.”

In a break with tradition by which candidates limit their activities during their opponents’ conventions, Trump campaigned cross-country.

The convention also highlighted a call for a broad reckoning over systemic racism and police brutality amid protests that broke out after the death of African American George Floyd in Minnesota under the knee of a white policeman.

Speaking from Houston, Floyd’s brother Philonise Floyd introduced a moment of silence and honored other Black victims of police violence.

“So, it’s up to us to carry on the fight for justice. Our actions will be their legacies,” Floyd said.

Jim Clyburn, the influential U.S. representative from South Carolina whose endorsement of Biden was critical to his breakthrough primary victory in that state in February, said Biden understood the need to unify people was part of presidential leadership.

Kasich, a former Ohio governor and frequent Trump critic who lost to Trump in the 2016 Republican primary, described his opposition to Trump as a patriotic duty and said the country was at a crossroads.

Standing literally at a fork in a road, he called Biden “a man who can help us see the humanity in each other.”

Speaking to reporters on Air Force One, Trump said Kasich “was a loser as a Republican and he’ll be a loser as a Democrat.”

“Donald Trump has no clue how to run a business, let alone an economy,” Meg Whitman said.

The inclusion of Republican speakers angered some Democrats who voiced concern it would take time away from progressive speakers like Sanders of Vermont and U.S. Representative Alexandria Ocasio-Cortez.

But Cedric Richmond, a Louisiana congressman and Biden campaign co-chair, pushed back against that idea, telling reporters earlier in the day, “Remember tonight’s theme is ‘We the People,’ not ‘We the Democrats.’”

Biden, 77, leads Trump, 74, in national opinion polls heading into back-to-back convention weeks for the two political parties. Trump will be formally nominated for a second term at next week’s Republican National Convention, which also has been scaled back due to coronavirus concerns.

His supporters lit tyres and blocked a road in Mumias town protesting for his release.