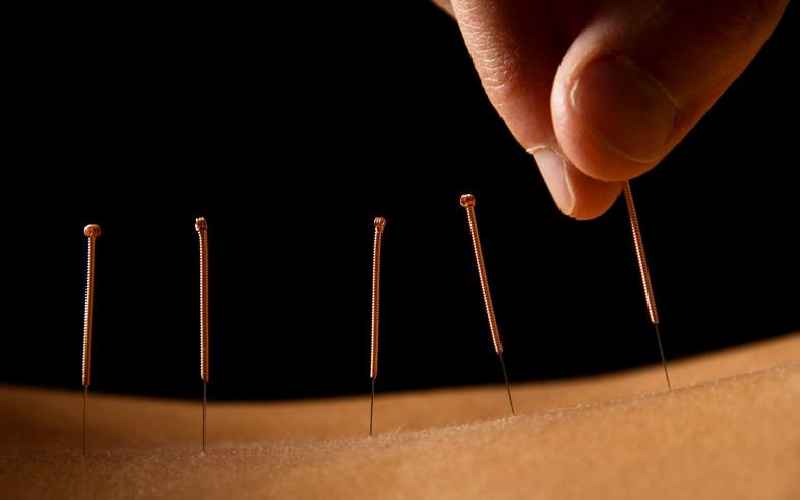 After three years of consistence physiotherapy sessions and several medical consultations, a Namibian lecture Daniel Mbangula still suffered from severe back aches that deprived him of doing many physical activities.

The 42-year-old man who is a lecture at the International University of Management (IUM) in Windhoek last week shared with Xinhua how his health condition took a huge positive turn a week before the country went on COVID-19 lockdown.

"As an adult, it may look odd to be seen crying in agony but, the nature of the pain I used to feel on my lower back was really exhausting. Sometimes it would just start even when I am in town walking or shopping, then I would just stop walking and silently cry," said Mbangula while lying on his stomach with some needles on his back.

Mbangula is one of the thousands and thousands of Namibians who have experienced some health benefits from Chinese acupuncture at the state-owned Katutura Hospital. He stays in Ojumise, outskirt in the capital Windhoek.

Xinhua caught up with him during his fourth acupuncture session, which was the second since the lockdown measures in the country was lifted on May 4.

"The problem started when I was doing my doctorate in 2017. Due to the demand of my studies, I would sit for hours doing researches, downloading materials from the internet and writing assignments all night. I believe that was the root of this problem," he narrated.

"My first point of health contact was a general health practitioner who referred me for X-Rays because initially it was not clear where the pain was emanating from. However, the results came back showing that there was no problem with my back. So they gave me pain relief stickers for my back, however, that only helped me get better that time and the pain still continued later," he said.

He had to go for physiotherapy for a month but still there were no improvements.

In January this year, Mbangula started googling about other alternatives for his condition and that's where he learned about acupuncture.

"I did not know where exactly to access the service, so I made inquiries in town where they were charging 350 Namibian dollars(19 U.S. dollars) per session and that was very expensive for me. However, later on someone referred me to this centre and I am happy to say that I had my first two sessions before the lockdown, and I felt significant improvements. After the two sessions I found myself being able to do physical activities that I struggled to do in the past. During the lockdown, I never had those severe pains," he said.

He wanted to limit movements abiding to the regulations, so he only resumed his sessions when the lockdown was shifted.

During the five-week lockdown, Mbangula said he would seat for long and even do exercises without any pain.

"I am very happy with the effectiveness, hospitality, services and affordability of the Chinese acupuncture here at Katutura Hospital. The process itself is user-friendly. The first time I came, Dr Fang asked me to describe the pain, a little background and examined me before starting treatment. Today is my third acupuncture session and the second since the suspension of the lockdown, my sessions are scheduled twice a week," he said.

Similarly, Devon Jansen, 49, from Khomasdale expressed his delight in the effectiveness of the acupuncture on his sciatic nerve.

"I hurt my sciatic nerve in February this year while I was exercising. It was very painful so at first I went to Robert Mugabe Clinic and they referred me to Katutura Hospital for physiotherapy. Whilst I was at the hospital, I saw where it was written 'Chinese acupuncture department' and I was intrigued. Generally I do not like taking pills or pharmaceutical medicines, so I decided to make inquiries instantly," said Jansen who was also lying in his own compartment with the needles on his bum area.

He could not do exercises because of that pain, at one time he tried to exercise and his leg felt numb. However, since his acupuncture sessions, he has been healing. He is left with six sessions to complete the healing procedure.

The Chinese acupuncture department at Katutura Hospital caters for patients across Namibia, some of the patients have to travel from other areas such as Rund which are 800 kilometres away from the capital.

Fang Lianqiang, one of the 13th batch of Chinese medical team that arrived in Namibia in January this year said the acupuncture services are on demand and people who reside out of Windhoek are pleading for the services to be decentralized. His team which comprises of two doctors and two nurses, replaced the 12th batch that treated more than 20,000 Namibian patients for one and a half years since 2018.

Fang and his team continue to provide health care services at the state hospital, their work has been consistent and in line to the country's COVID-19 regulations.

"We still continue providing our services to the people. In the beginning of the year the number of patients coming on a regular basis was very high, however, during the COVID-19 lockdown, the number decreased. Now that the lockdown has been shifted, the number is slowly increasing," he said.

He said, ever since the outbreak of COVID-19, his department screens the patients before they are attended to.

"The patients are screened for the virus by temperature checks, and being asked if they are or have experienced any of the virus' signs and symptoms. We also sensitize them about the pandemic, for those who may have had signs or symptoms we then refer them to COVID-19 testing sites," he said.

The department also ensures that patients come wearing masks as stipulated by the government measures to curb the spread of the virus.

At the reception where patients are screened for temperatures, there are also given hand sanitizers.

Fang said the department, also make use of disinfectants on surfaces to ensure a hygienic environment is maintained.

Since 1996, China has been sending medical teams to Namibia which consist of two traditional Chinese medicine professionals and two nurses.