A woman is fighting for her life at the Busia County Teaching and Referral Hospital after she was attacked and her hands chopped off.

The family of Janet Auma allege she was attacked by her estranged husband, Bernard Ouma, following a domestic dispute.

Auma's mother Modesta Awino said the two had not known peace since her daughter moved in with Ouma two years ago. She was just 20 at the time. The couple has a one-year-old baby.

Ms Auma and Mr Ouma dated just for a few months before started living together. Auma's parents were against their relationship because they felt their daughter was too young for marriage.

"Their marriage flew into headwinds just months after they started living together. We have tried telling her to quit the relationship but our pleas have fallen on deaf ears," Ms Owino told The Standard at the county hospital where her daughter is admitted in critical condition.

She added: "Theirs has been a tough relationship. Not once, not twice, not thrice has her husband beaten her senselessly. In fact, we have lost count of the times they have fought and she has always ended up sustaining serious injuries. She would come home after being beaten but interestingly, she would always go back to her husband after recovering."

"In the latest incident, on Monday, Ouma and Auma fought 10 days ago. My daughter packed her bags and left. I told her there was no way I was going to allow her to return to her violent husband. I feared for her life,” said Owino.

It is alleged that Ouma followed his wife to her parents' home and attacked her before fleeing using a motorcycle. He is also said to have slashed her on the thighs and head with a machete he was armed with.

On the fateful day, Ms Owino said, she had sent her daughter to collect firewood behind the house so they could make breakfast when Ouma, reportedly pounced on her.

"I heard Auma screaming. I rushed to where she was picking firewood and found her lying in a pool of blood, unconscious. Her hands had been chopped off and she was bleeding profusely. The left hand lay beside her and the other one had been chopped into pieces. I saw her husband escape on a motorcycle. I saw him. He was still holding the machete he used to attack my daughter. He wanted to kill her," Owino claimed. 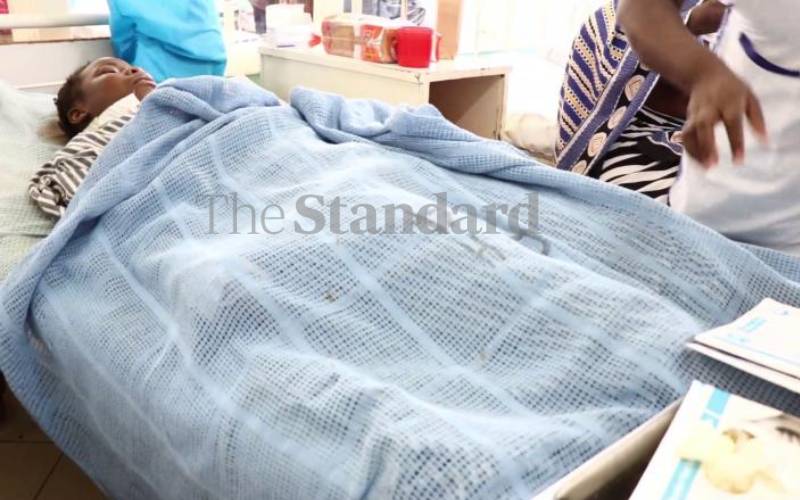 They took Auma to the county hospital that is 15 kilometres away from their home in Burinda village in Butula Constituency.

Auma's grandmother Margaret Atieno said: "My grandchild had a promising future. She wanted to become a teacher. The attack has shattered her dreams."

She said boda boda riders arrived, after hearing the screams, ready to lynch the attacker but he had already left.

"It would be a different story had the riders caught up with him. They would have killed him," said Atieno.

Atieno: "She may have gotten married at a young age but she was hardworking and we all knew she would continue to pursue her dreams, even from her husband's house. But will that be possible now that she is without hands?"

"This is sad and may Auma's attacker never know peace. We are calling on the police to speed up investigations and make the author of this heinous act face the full force of the law."

Joseph Oduor said he has always intervened whenever his cousin and the husband quarrelled.

"It never occurred to me that their differences would get this serious. We fear the suspect could launch another attack if he is not arrested swiftly," Oduor said.

Chelimo said they are following some crucial leads and he was positive they would soon catch up with the suspect.

The officer called on the public to volunteer information that will lead to the arrest of the suspected attacker.

"We are doing everything possible to have him arrested and be prosecuted,” said Mr Chelimo.

The report accuses all sides of torturing and killing civilians, carrying out gang rapes, and making arrests on the basis of ethnicity.

By Hellen Miseda | 3 hours ago

By Omelo Juliet | 5 hours ago