Three camp at river till friend’s body is found

By Brian Kisanji | 1yr ago

Three men who witnessed their friend drown in a river have been forced to stay at the bank until the body is retrieved.

Their friend, Victor Wekhova, 27, drowned as they hunted for fish together in the river but was swept away by raging waters over a week ago.

The trio will have to pitch tent at the river bank for as long as the search for the body is on - they are not even allowed to change the clothes they had on when the tragedy occurred because that would offend their dead friend, according to elders.

The four friends were heading to Bukura Trading Centre on February 4 when they decided to take a dip into the river to catch some fish.

Sadic, who is the younger brother of Wekhova said they spotted a shallow place in the river from where they could catch the fish.

However, things didn’t go well for Wekhova who wandered away to the deep waters and ended up drowning.

The three called for help but locals who were fishing at the banks ran away for fear that they would have to go through the ritual of waiting for the deceased to be retrieved.

“Those who were fishing took off and they have never stepped here fearing they will be subjected to the ritual of having to stay here with us until the body is retrieved,” said Sadic.

Divers were called in and are still searching for the body.

But the trio will have to stay by the river for as long as it is necessary in fulfilment of the traditions.

Elders had earlier asked them to move away from the area around which Wekhova drowned because staying there could “scare their dead friend from coming out of the water”.

“We had been asked to move away from the spot where my brother drowned as it is believed that we became enemies with our departed friend because we watched him die and could not save him,” said Sadic.

Namale recalled their frantic efforts to rescue their friend.

“We did all we could but failed to rescue him; we should not be held responsible for his death,” he argued. “Our prayer is that his body is found soon so that we can accord him a befitting burial.”

Such cases are common along Rivers Lusumu and Nzoia and it is not the first time people have been compelled to do these vigils. Only the elders can perform the cleansing rituals that would enable the three to leave the site but this can only be done after the body is retrieved.

Henry Maina, an elder, says the trio have no option but pitch tent at the river bank.

“It is not our wish but traditions dictate that. Going against the beliefs could put the lives of this young men in danger,” he told journalists.

Maina added that if they leave they will be haunted by their dead friend’s spirit forever.

According to him, a ram or a cock either black or red in colour will be slaughtered at the spot where the victim drowned immediately the body is retrieved from the river.

Ekuru Aukot's sister among 11 killed by bandits in Turkana East
Rift Valley
By Kennedy Gachuhi and Julius Chepkwony
12 mins ago
More than 500,000 residents of Turkana in dire need of relief aid
North Eastern
By Bakari Ang’ela
13 mins ago
Governor Natembeya raises red flag over Ebola in Uganda
Western
By Martin Ndiema
25 mins ago
Marion Alala: Student who has taken Kenyan swimming by storm
Unique Sports
By Kipsang Joseph
28 mins ago
. 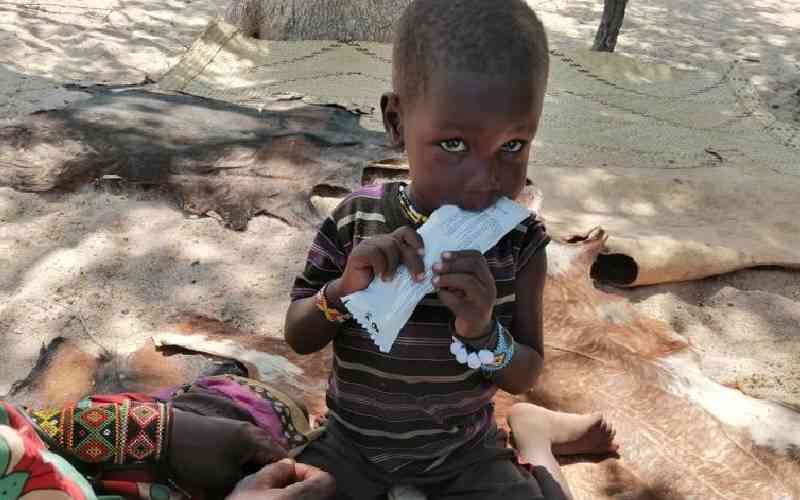 By Bakari Ang’ela 13 mins ago
More than 500,000 residents of Turkana in dire need of relief aid

By Kipsang Joseph 28 mins ago
Marion Alala: Student who has taken Kenyan swimming by storm
.