Lobbying intensifies to replace Oparanya at CoG this Friday

The Council of Governors meets this Friday to elect a new chairman amid discontent among members -fuelled by the handshake between President Uhuru Kenyatta and ODM’s Raila Odinga that sidelined Deputy President William Ruto.

The division has seen some governors opting to steer clear of council affairs like what happened last year following a standoff over the third generation revenue sharing formula.

The proposed formula by the Commission on Revenue Allocation and subsequent amendments by the Senate Finance Committee caused a rift in the CoG, with members accusing the leadership of sitting on their hands and allowing devolved units in North Eastern, Coast, Eastern and parts of Rift Valley to lose over Sh20 billion.

There is also the simmering issue of a snubbed 'gentleman's agreement' between Salim Mvurya (Kwale), who was Ruto's candidate, and Oparanya's predecessor, Josphat Nanok (Turkana), after the 2017 General Election.

Oparanya, who was backed by Uhuru and Raila, sailed through on consensus in an event skipped by Mvurya while Anne Waiguru (Kirinyaga) withdrew her candidature. Jackson Mandago (Uasin Gishu) and Ali Roba (Mandera) were swept away by votes from members of the Lake Region Economic Bloc.

"The council leadership has failed us. We had high hopes in Oparanya and his team to restore the lost glory of the council by standing firm for devolution but they betrayed us,” said a county boss who requested anonymity.

He continued: "We decided to replace the entire team led by Nanok because we wanted fresh blood and to begin on a clean slate. The outcome is worse. We now want a chair who will defend the devolved units and stand for the truth even in tough times ahead."

Those who have expressed interest in the top seat include Mvurya, Waiguru, Mandago, Kivutha Kibwana (Makueni) and Martin Wambora (Embu).

At the same time, governors James Ongwae (Kisii) and Anyang' Nyong'o (Kisumu) will square it out to replace Murang'a Governor Mwangi Wa Iria who has served two terms as vice chair. 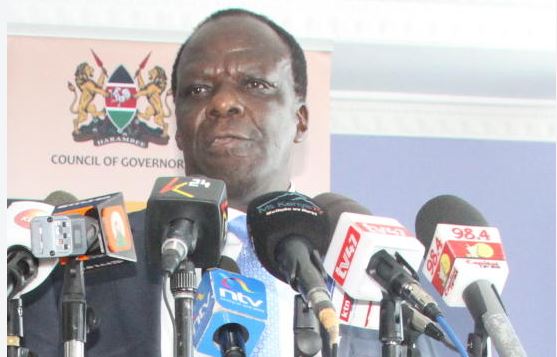 The Kakamega governor (pictured) downplayed complaints that he was pro-establishment and did not lobby much for the CoG, instead taking the Executive's position without prior brief and consent from his colleagues.

"I support BBI; it’s a fact. I have done my best in the circumstances available and stood for what I did before my election as chair till now. It is such a demanding job but I am happy it gave me a new experience.

"I have talked to a number of governors who have expressed interest to succeed me. I can only wish them the best," said Oparanya. "Governor Wa Iria is not going for any elective post. He has told me the same."

The January 29 election comes amidst a war of words between National Treasury Cabinet Secretary Ukur Yatani and Oparanya over delayed disbursement of funds to the counties.

Unlike past elections that have been based on consensus, Friday's poll may be scripted differently, especially now that the CoG is funded by the Exchequer–a departure from the past when counties picked up the tab.

With 18 months before the General Election, some first-term governors want to use the time to build their brand for re-election, while those who have served two terms are eyeing entry into national politics.

Nanok recently took a swipe at Oparanya whom he accused of not speaking up and condemning the 'unconstitutional' events unfolding at City Hall when former Governor Mike Sonko was ousted.

"I am speaking because Governor Oparanya cannot speak because he fears. He thinks he will be locked up for opposing what is happening. He is very afraid,” he claimed.

It’s under Oparanya's leadership that two serving governors, Sonko and Ferdinand Waititu (Kiambu), were successfully kicked out of office over corruption allegations. Seven governors were also arraigned in court to answer to graft charges.

Council of governors set to host devolution conference in Meru

By John Shilitsa and Micah Sali | 1 day ago

By Willy Lusige | 2 days ago