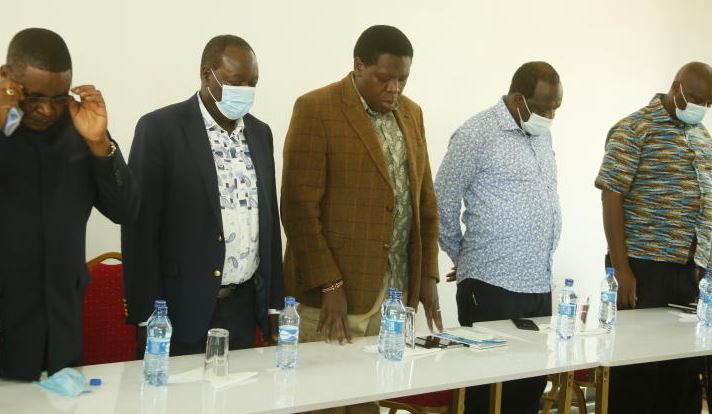 All MPs from Vihiga skipped the meeting except Godfrey Osotsi (nominated). The duo warned Mudavadi that the train had left the station and he risked being left out. Vihiga Governor Wilbur Ottichilo, who has been conspicuously missing in earlier meetings, played host to the newly appointed Western region spokesmen.

“We are here to follow up on responsibilities bestowed upon us during a meeting held at Cotu Secretary General Francis Atwoli’s Kajiado home recently,” Oparanya told journalists after the meeting.

He said their focus was to bring all leaders across the region together and galvanise the vote-rich bloc ahead of the 2022 General Election on top of pushing for development of the region.

“We have been to all other counties meeting elders except Kakamega, which will be our last stop,” explained Oparanya.

Oparanya, who is the Council of Governors chairman, said circumstances necessitated them to be close to the Jubilee government “and we must take advantage of everything to ensure our region gets development”.

According to him, the focus was on having Western strongly represented in the government.

“When I was in the Cabinet between 2007 and 2013, Western had at least nine Cabinet ministers in the government; today we have only Mr Wamalwa who comes from Rift Valley. We must initiate a serious discussion over where we want to be in 2022 as well as development issues,” argued the county chief.

Wamalwa said the people of Western are craving unity of purpose as opposed to political differences like those pitting Mudavadi and Moses Wetang’ula on one side and Oparanya and Wamalwa on the other.

According to Wamalwa, the region will not make development strides in case divisive politics continue to take centre stage.

“Appointments in government are just like investment; you cannot demand high bonus when you have fewer shares in a company. Let’s ask ourselves as a region how much shares we have invested in the government to guarantee us development,” said Wamalwa.

The CS claimed he was lonely in the government, but exuded confidence that the number could go up in the next government in regard to individuals from Western appointed to Cabinet positions.

He urged elders to reach out to Mudavadi and Wetang’ula who have vowed to chart their own political destiny accusing Oparanya and Wamalwa of being ODM stooges.

Their sentiments were echoed by Ottichilo, who indicated that all five governors from the region were ready to work with Wamalwa and Oparanya “who have direct access to the president due to the positions they hold”.

Former Cabinet minister Noah Wekesa said other leaders were free to join the bandwagon or risk being left behind.

Mzee Fred Omido from Maragoli read the elders’ joint resolutions but was quick to say that they will only support the region’s development agenda.

The ODM leader has hosted key politicians from opposing camps in recent months.

By Bernard Lusigi | 10 days ago