Western counties put in a spot for funds wastage

Western counties have been put on the spot by the Auditor General’s report for low absorption of budget funds and over-expenditure on foreign and domestic travels.

In his report, Auditor General Edward Ouko exposed how tax payers’ money may have been swindled by the county governments of Kakamega, Bungoma, Vihiga and Busia between December 2013 and June 30 last year.

The audit exposed rot in Kakamega County through massive irregularities in its 2013/14 financial expenditures. It reveals how the county executive irregularly procured road works by flouting procurement laws. The county is also blamed for extravagance and unaccounted for expenditure on regional conferences.

In Bungoma, the report said the county executive conspired to swindle millions of shillings through undelivered services.

“The executive paid Sh14,728,397 in respect of a coffee mill made to a cooperative union that could not be ascertained as a visit to the proposed coffee factory at Chwele revealed the mill has not been assembled, one year after it was delivered,” reads the report. Another Sh5 million was lost through construction of Kopsiro Model Health Centre which was started in 2009 as part of the economic stimulus projects.

In Vihiga, the county government had under-expenditure of more than Sh600 million of the total amount allocated to it by the Treasury.

Busia County Government was put on the spot for spending Sh127,698,568 on domestic travel, subsistence and other transportation costs between July 2013 and June 2014 against a provision of Sh87,406,238. But Kakamega Governor Wycliffe Oparanya dismissed the audit report, blaming the Government for their financial woes.

Oparanya blamed the low budget absorption on the National Government, saying it has always delayed to release funds. “The audit report is unrealistic. Immediately the Integrated Financial Management Information System (IFMIS) is closed, the county governments cannot access the money. Money end up lying in our accounts because we cannot withdraw it for use,” said the governor.

Bungoma’s Kenneth Lusaka, however, warned those found having conspired or swindled public money that they will face the law.

“I will not spare anyone implicated in misappropriation or misuse of public funds that we desperately need for development. I have asked relevant departments and officers to examine the queries and immediately provide answers for my appropriate action. I am familiar with some of the queries, into which I had already ordered investigations and a comprehensive report has been done ready to be forwarded to the Auditor General and other relevant bodies,” he said.

Amani National Congress (ANC) leader Musalia Mudavadi has expressed displeasure at the practice of Kenyan leaders seeking the intervention of foreigners to resolve their local challenges. 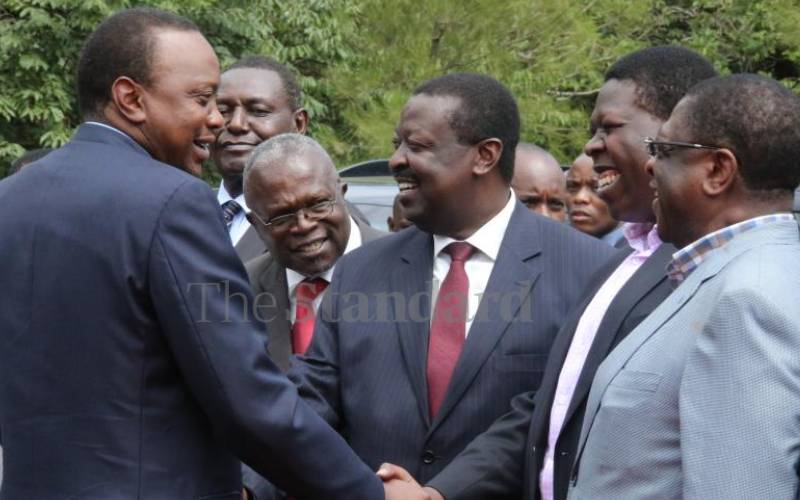