I have talked my way to success

I am a motivational speaker, a life and team building coach, an author of four motivational books and a part time Communications and Public Relations lecturer at Karatina University.

I was not born with a silver spoon in my mouth and two weeks after my birth I became seriously sick and everyone thought I was destined for death.

My dad kicked us from home and told my mother to go back to her parent's home where the ailing child should die.

God was with me and instead of dying I pulled through and grew up into a healthy baby.

However the separation from my father opened a different chapter in my life that consigned us to debilitating hardships.

My mother worked as a casual labourer and could barely raise the fee required but my aging grandfather, a peasant farmer, and the CDF had to chip in or else I would have dropped out of school.

I believe this hard chapter in my life was not in vain because it helped shape me into a resilient person and a go-getter as well as gave me the patient to accord tormented people a listening ear.

I began public speaking in earnest at Kamama Secondary School in Embu County where while in Form Two as a class prefect I wowed my teachers in my debut talk during the assembly.

By the time I completed secondary school, the Principal Peterson Muthathai had noted I was gifted in public speaking and he would give me various avenues to address the students.

When 2003 KCSE results were out, I had scored a B plain of 64 points but unfortunately, the cut off points was raised to 65 points dimming my chance of joining university to pursue my dream course in communication and public relations.

In May 2004, a well-wisher sponsored me to repeat Form Four at Facing Mt Kenya High school near Kerugoya town where I bagged a B+ of 72 points.

I taught for a while in the same school before proceeding with tertiary education.

My song was now a different one from that of that difficulties and obstacles when I got admitted to Moi University to pursue a Bachelor of Science in Communication and Public Relations.

At the university I joined various clubs and trained in guidance and counselling; drugs and substance abuse counselling; and rape management, sex and sexuality.

I used my knowledge to guide and mentor other students and the youths back at home.

While in third year during the holiday vacation I walked to Kiburu Secondary School which is near my home in search of a job as an untrained teacher.

The then Principal, a Mr Mwaria, perused my documents, stared at me keenly then proffered some words that would shape my motivational speaking career.

"I will not offer you a job to teach, but I will give you an opportunity to come and speak to the students," the principal told me after seeing my certificates in public speaking and guidance and counselling.

Engulfed in a mixture of excitement and fear, I prepared intensely then on the appointed date delivered a motivational talk to the students on self-efficacy, specifically that they could make it in life.

On being impressed by my talk, the principal told me: "Mutugi you are sitting on millions. Exploit your talents in public speaking and you will scale heights."

I would say the encounter with Mr Mwaria opened the way for me into a career in public speaking that has seen my dreams come true and the future very promising.

On graduating from university, I secured an internship at the communications department of Kenya Ports Authority in Mombasa but after working for a few weeks I realised I was not utilising my passion in motivational speaking and quit.

I went back home and would speak in churches and community meetings.

Later I secured a job at Kagumo Girls' as an untrained teacher on a Sh10,000 salary to augment my earnings.

I later transferred to Kiburu Girls, which was near his home so that I could come from home and save on paying rent but resigned officially on April 2012 from teaching to concentrate fully on motivational speaking.

I began by making business cards and flyers detailing what I do then dropped them in various schools and local institutions.

At Kerugoya Girls' High School the principal required that I present to her before she could allow me to speak to the students.

She was impressed by my presentation to her and encouraged me by saying I could change the girls.

The girls loved my motivational talk on self-esteem and attitude change and the school kept on giving me regular sessions to talk to the students and they also marketed me to other schools.

Buoyed by the impact of my talks to others, I felt a great urge to put my counsel into written work and published my first book: "Why wait when you deserve it now!"

I priced it at Sh300 and it was well received and made sales to teachers, parents and students in the schools that I visited.

In early 2013 when my fame as a motivational speaker had spread to Kirinyaga, Embu and Nyeri, I published "Exposed! The silent killer of your dreams", which was inspired by my dealing with students and learning what drives them to indulge in sex, drugs and alcohol.

I put a lot of research into my writing and by the end of 2013; I had churned out my next title "Excuse me! Your destiny is in your hands".

My breakthrough in life was in 2014 when principals and heads of corporates started inviting me in droves and at times I would be forced to forego some.

In 2013 I also registered for a master's degree at Karatina University and by May 2014 was given units in PR and communication diploma level to teach.

By the start of 2015 my stars were shining brightly with lucrative invites some earning as much as Sh40,000 in a session and travelling far and wide in Kenya and the East Africa region.

I started this year by a new title "8 principles of parenting the instant generation" in which I show how the problems students exhibit at school arise from home and how the parents can curtail them.

My heart is set on joining the international market in public speaking and specifically to speak to youths in Africa and the world.

I am contented with the journey I undertook in earning from my talents instead of waiting for the elusive jobs that are being hunted by every other graduate.

I love what I do and do it with passion.

It is very fulfilling to change someone's life considering I have talked to students who were contemplating abortions and suicides and convinced them out of it, into letting the right people know and coming to terms with their situation.

I am married to Maryanne, a teacher at Wandubi Secondary School in Nyeri, who is supportive of my work. 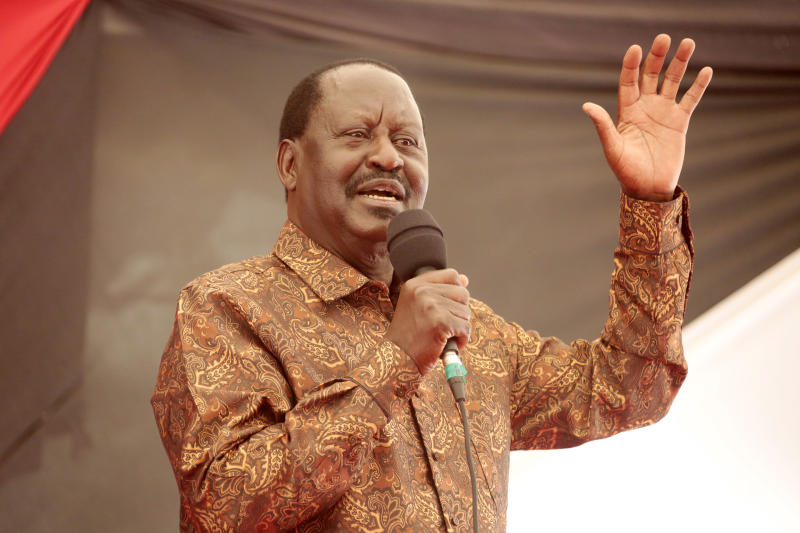 Raila promises better terms for varsity dons if elected President
Raila Odinga has promised better terms for university lecturers and staff should he clinch the presidency in the August 9 elections.
Politics
By Josphat Thiongó
3 months ago
.