The school’s headmaster Gabriel Korir said the fire broke out at around 2am Saturday, razing the dormitory that was housing male students.

Tinderet Ward Member of County Assembly (MCA) Chepkwony Kipkurui who arrived at the scene moments after the fire broke out told The Standard that three male students died in the inferno that reduced to ashes, the dormitory which had been housing 74 pupils.

“Three children were burnt beyond recognition in the bizarre incident and the bodies have been taken to Kapsabet County Referral Hospital,” said Kipkurui.

Pupils who escaped the fire said the three boys quickly salvaged their belongings and rushed them to safety outside the dormitory.

The three children however decided to go back to the burning dormitory to awake their mates who they suspected were still sleeping through the fire.

"They were moving from bed to bed waking other children; some were still fast asleep especially the young ones. The fire however went out of control at the last minute and they could not get out," explained a class five dormitory mate in tears.

Residents from the neighbouring community tried to put out the fire in vain. It took long for the fire rescue team to reach the scene as the school is located in the remote parts of Nandi County.

According to Kipkurui, the fire begun around 2am, adding that rescue efforts did not bear fruits as fire engines from Eldoret arrived at the scene when the damage had already been done.

Nandi County has neither a fire engine nor a rescue team and depends on teams from Eldoret and Kisumu, which would definitely take long to arrive at the school.

Several other pupils sustained minor injuries in the subsequent stampede as they tried to scamper for safety. Others suffered from smoke inhalation effects but they are said to be free from danger.

It was a sombre scenario as parents and community members streamed into the school despairingly staring at the smoking debris where lives of young children had been lost.

Kenya National Union of Teachers (KNUT) National executive council official Boniface Tenai who is the secretary general of Nandi East said other students were safe and with minor bruises from the stampede.

“The dormitory was temporary and made from timber hence the complete combustion, the school is young and had just registered pupils for Kenya Certificate of Primary Education for the second time and in the process of trying to establish permanent structures,” said Tenai.

He ruled out the lack of adherence by the school to the safety standards prescribed by the Education Ministry in the school and termed the incident as an accident.

“From the pupils’ testament, one of their dead counterparts was sound asleep during the incident but the two other were the first to raise alarm but were caught in the huge blaze when they returned to pick their belongings,” explained Tenai.

Korir said the school administration and stakeholders have agreed to indefinitely close the institution and a committee has been formed to evaluate the situation and make funeral arrangements for the deceased children.

“The school management board has agreed that we close temporarily, parents are currently registering their children and taking them home, the committee will also strategise on establishing a new dormitory,” said Korir.

The school has a pupil population of over 200. A host of Nandi County leaders led by Deputy Governor Dominic Biwott, Women Representative Zipporah Kering and MCAs visited the school to console the parents. 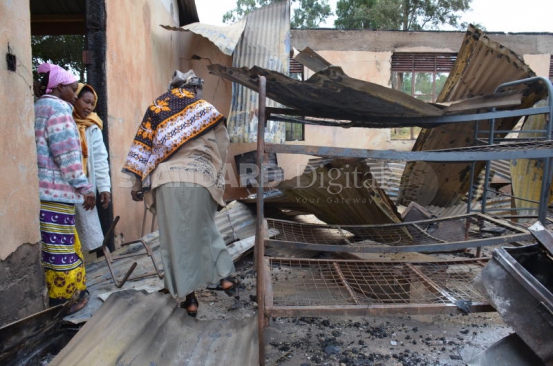