By Kennedy Gachuhi | 10mos ago

Orange Democratic Movement (ODM) leader Raila Odinga appears to have changed tact in his quest to win support in the Mt Kenya region.

Besides holding political rallies and making stop-overs at trading centres, the former premier has resorted to town hall-like meetings to improve his chances of turning tables on Deputy President William Ruto.

In Nyandarua County, for instance, more than 5,000 grassroots leaders turned up at the Ol’ Kalou arboretum to listen to his policies and deliberate on how to persuade more voters.

This follows a realisation reliance on campaign rallies and roadside meetings have not been working well for Azimio as they were prone to heckling among other interruptions.

In his recent town halls meetings, Raila has been listening to presentations from the youth, women, men, the elderly, people living with disabilities, farmers, business people, Mau Mau war veterans and other interest groups.

In the Nyandarua forum hosted by Governor Francis Kimemia on Tuesday, invited speakers were carefully selected with the purpose of ensuring that the message reached the people.

A lawmaker from Nyandarua, who is a key supporter of the Azimio la Umoja campaign, said the target audience model has been approved by President Uhuru Kenyatta and Raila- his handshake partner.

“It is the best way to penetrate the region that is proving a hard nut to crack. With this strategy we aim at changing the political tide in the region,” said the MP, who requested anonymity.

The Sunday Standard has gathered that in the plan, it is envisaged that the selected few will be used as grassroots ambassadors to sell the Azimio la Umoja crusade as they are well versed with their locality.

The Nyandarua meeting is billed to have been more successful compared to the one in Murang’a due to the change of strategy and there is a plan to reciprocate the same in other Mt Kenya counties.

In the recent two meetings in Murang’a and Nyandarua counties, Raila has been listening to presentations from the youth, women, men, the elderly, People Living With Disability, farmers, business people, Mau Mau war Veterans and other interest groups.

Analysts, however, expressed varied opinion on the change of strategy by the Azimio la Umoja movement.

While others supported the decision saying it was one of the best strategies to approach a hostile voting bloc, others criticized it saying it was a doubled aged sword.

Gitile Naituli, the professor of management and leadership, argued that the Raila team was missing the point, saying Raila’s primary supporter- President Uhuru Kenyatta is no longer appealing to Mt Kenya voters.

“Raila might not know it but Central Kenya voters are rebelling against Uhuru because of the current economic situation in the country and not him (Raila).

“If Raila will distance himself from Uhuru and pick someone like Martha (Karua) as his running mate, then he will easily convert Mt Kenya into an Azimio la Umoja zone.” Prof Naituli observes.

He further argues that the town hall meetings is not Raila’s strategy but Mt Kenya Foundation agenda which will fail miserably because it cannot work.

“They (Mt Kenya foundation) are misleading Raila. They have just realized that they cannot deliver the votes they promised from the Central Kenya hence the alleged change of tact. Raila should just go directly to voters because the foundation cannot deliver to him the votes, “ Naituli observed.

Herman Manyora, a senior lecturer at University of Nairobi said that the strategy has a high chance of effectiveness though comes with its own challenges.

“Town hall meetings allow a candidate to engage with opinion shapers who are instrumental in political mobilization. You also get a chance to listen directly to the needs of the people,” said Manyora.

The political analyst however noted that the strategy cannot be used on its own and requires the traditional political rallies in the open.

“They should be careful not to appear to be selective of their audience. Every vote counts. Town hall meetings have limited audience compared to open air meetings,” added Manyora.

Kimemi however says the successful meeting was a clear testimony that Raila has been able to make inroads to the populous region. 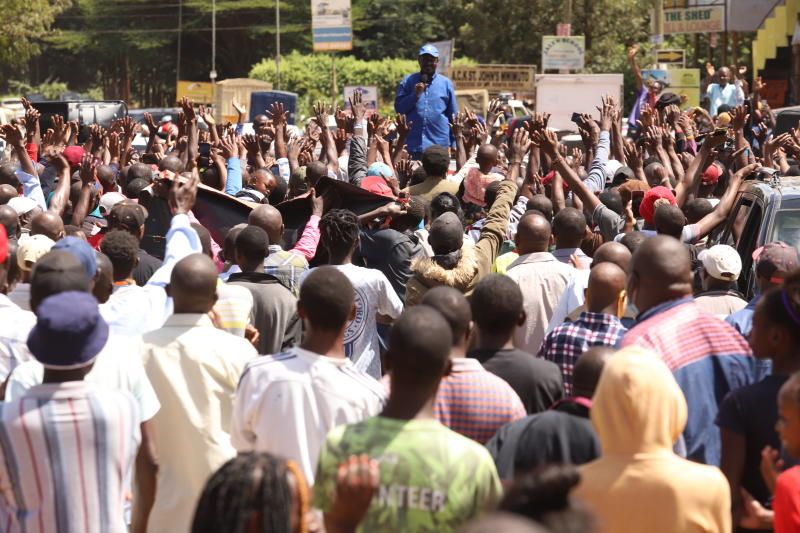 Kenya among countries to receive food donation from Ukraine
Europe
By VOA
59 mins ago
Too much nudity robs men of excitement in the bedroom
BLOGS
By Awuor Omino
1 hr ago
Water harvesting technology from house roofs to water pans
Crop
By Muriithi Mugo
1 hr ago
Tips on saving water through sustainable use
Smart Harvest
By Dr Paul Kang’ethe
1 hr ago
.

By VOA 59 mins ago
Kenya among countries to receive food donation from Ukraine
.