Perhaps it is their almost mysterious shyness that makes mountain bongos rare, always retreating into the toughest terrains within their natural ranges.

The Mountain bongo, a beautiful, elusive and coppery red antelope with white stripes and spiral horns, is the largest forest antelope and can only be found in the wild in Kenya. They are only found in their natural habitat in Aberdare, Mt Kenya and Eburu forests.

Mountain bongo has been classified as critically endangered by the International Union for Conservation of Nature (IUCN) with its population in the wild having declined to less than 100 individuals due to poaching, diseases and destruction of habitat because of human encroachment.

In efforts to conserve the critically endangered antelopes, several initiatives in pockets holding mountain bongo populations have been launched.

The latest, including the launch of an 800-acre indigenous forest area on the slopes of Mount Kenya. The sanctuary, known as Mawingu Mountain Bongo Sanctuary, is aimed at boosting the conservation of the species while enhancing the breeding program of the species.

Cabinet Secretary for Tourism and Wildlife Najib Balala said the construction of Mawingu Bongo breeding sanctuary will allow for gradual re-wildering of some captive bongos back into the wild.

“The construction of Mawingu Bongo breeding sanctuary will allow for gradual re-wildering of the captive bongos back into the wild. This underscores my commitment and that of the Government to ensure no species goes into extinction due to decisions which we could have made to secure the species and therefore, I call upon all the stakeholders to focus on the implementation of the recovery plan 2019-2025,” Balala said. 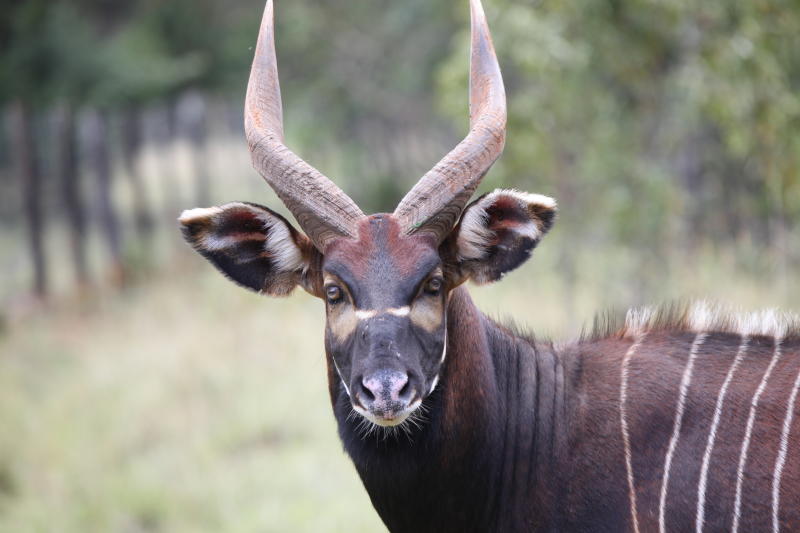 Previously, Mountain Bongos also lived in Cherengani Hills, Chepalungu Hills and Mt Elgon but they have since been hunted down, wiped by diseases and their habitat lost. IUCN also identifies hunting and loss of habitat in the Mau and Eburu forests, due to illegal logging, as some of the biggest threats to the antelopes.

In 2004, a Bongo Surveillance Programme was initiated to investigate the status of the remaining bongos in Kenya.

The same year, American Zoological Institutions joined hands with the Bongo Species Survival Plan in returning 18 of their Zoo bred bongo with Kenyan ancestry to the soil of their origin. Since then, the ministry of tourism and wildlife says the population has grown.

In 2015, the programme showed Kenya only had close to 100 mountain bongos, well below the Critically Endangered threshold of 250 animals.

Statistics reveal that in 2020, twelve baby bongos were born as part of the Mount Kenya Wildlife Conservancy breeding program, which has brought the total births in the last 5 years to over 70.

Dr Patrick Omondi, Biodiversity, Research and Planning Director at KWS said that the Mawingu Bongo Sanctuary is part of the implementation of the National Mountain Bongo Recovery and Action Plan 2019 – 2023. He said the initiative will greatly boost the recovery of the species in the wild.

Mount Kenya Wildlife Conservancy Conservationist Humphrey Kariuki said that conservation of water towers was key in the survival of the species.

“Mountain bongo is a specie whose natural habitat also happens to consist of water towers that nourish our rivers, our farms, and our homes. Therefore, the milestone we are marking today is significant not only for the species itself but also for our communities who will enjoy the added ecological benefits provided by healthier and sustainable habitats and ecosystems,” Kariuki said.

As part of incorporating technologies in efforts to save the endangered mountain bongos, camera trappings have also been deployed to monitor and collect data in Eburu, Aberdares and Mount Kenya water towers.

Camera trapping is part of growing modern technologies in wildlife conservation where scientists and researchers mount motion-sensitive cameras in particular areas to monitor movements and track prevalence for data documentation.

The technology has been used in Kenya as part of intense monitoring of the endangered mountain bongos to map out their ranges and survival in the wild.

“In 2018, we did an intensive study to map out the ranges of mountain bongos in Eburu by deploying trap cameras. The two-year study was able to give us different species within Eburu and particularly the mountain bongos," Donna Sheppard, a scientist with Rhino Ark said.

During the 2018-2019 period, 50 cameras were mounted on different areas within the expansive forest as part of a partnership between a Calgary Zoo in Canada, Rhino Ark and Kenya Wildlife Service.

The cameras are placed a kilometre apart in pockets where bongos are believed to exist in large numbers. The areas include tough terrains in the mountainous forests.

Rhino Ark’s coordinator and resource development manager for Mau, Erick Kihiu, said the use of technology to enhance surveillance of mountain bongos in Eburu has borne fruits over the past years.

“The electric fence has reduced cases of human-wildlife conflicts while helping secure the Mountain Bongos. We are still working to secure degraded areas of the forest which are key in the dispersal and breeding of the species. A wildlife corridor has also been created to allow animals access Lake Naivasha,” Mr Kihiu said.

Besides incorporating an electric fence to secure mountain bongo habitat in Eburu forest, a new advanced monitoring technology fitted on the fence that enables rangers to easily monitor the fence and pick out faults has also been pioneered.  The fence has sensors that also relay messages, through SMS, in case of a fault on the fence.

The technology, he said, is part of efforts to deal with illegal hunting of the species that live deep inside the forest because of their shy nature.