Clueless about labour pains, my baby dropped into a long-drop latrine

In the tiny village of Kimana near the Kenya-Tanzania border, chirping birds usher in the day. The village is the home of young Maasai girls torn in between tradition and modernity.

Dorcus Mosoni was born here 18 years ago. She was determined to succeed in life but poverty pinned down her dreams.

‘’My parents were not able to fund my education,” says Mosoni.

With poverty oozing from all corners of the family, Mosoni was her family’s only hope of turning sorrow into joy. Education was the gateway to this dream.

As she joined Form One, she was determined to be a doctor but fate had other ideas.

“I met a man who promised good tidings and we started dating which lasted for a couple of months,” she says amid tears.

After months of romance, she noticed changes in her body including severe morning sickness, mood swings and weight gain.

“I was subjected to a pregnancy test which turned positive and expelled from school,” Mosoni recalls.

As a firstborn in a family of five, Mosoni’s dreams were crushed by a single night of pleasure and now the man responsible was missing in action.

“At that point, I felt alone and condemned by the world. My sponsor stopped paying the fees pushing me to the wall. The only option I had was to find a way out to my bad state,” she breaks into silence again.

As life turned from bad to worse, Mosoni ended up working as a house help in the neighborhood for Sh4000 which catered for hers and her family’s needs.

The working environment became hostile as she had to work for over ten hours a day. “Keeping in mind that my parents depended on my meagre salary to support my young brothers and sisters, I had no option but to withstand the pressure,” she recalls. 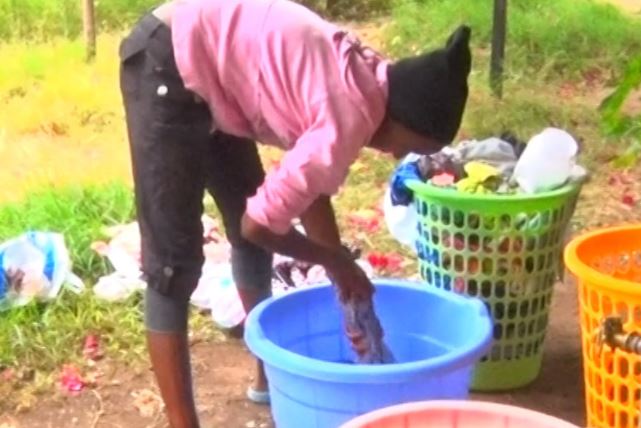 With no experience of being a mother before, she couldn’t differentiate between normal and labour pains.

She says she experienced pain in intervals at one point.

“On that particular day, I had extreme pain and pressure on my lower abdomen so I ran to the washroom thinking it was a normal urge to pass urine not knowing I was already in labour.”

As she squatted on the pit latrine, the baby dropped into the pit.

“I was more confused and terrified seeing blood all over. I didn’t know who tell because my employer could call in the police. I went back to work and later retired to bed but in pain.”

Early in the morning the next day, Mosoni was too weak to wake up. Her employer had to get to her room only to find blood all over the bed.

An unconscious Mosoni was rushed to a hospital in Loitokitok. She was put on a drip to stabilize and later a scan conducted to verify if fragments of placenta were in the womb which turned negative.

“My baby was retrieved from the latrine by the police and put under medical care for months”. But that was not the end of her troubles.

On recovery, she was put behind bars and a file opened for attempted murder. She spent more than two months in remand and later released on bond.

“My case is still active. I have gone to court several times for mention, and my caregiver has taken up the matter so that I focus on raising my baby. I never intended to kill my baby as people believe (sic),” she says.

While the man who impregnated her is still on run and police in search of him, Dorcas and her baby now are under the care of a well-wisher and through her charity work, she has resumed studies.

She says society judged her cruelly without considering her family’s poverty.

“I learnt the hard way,” Mosoni says. For her once bitten twice shy.

How to prepare our children for back to school

Most children do not know what to expect once they go back to school.