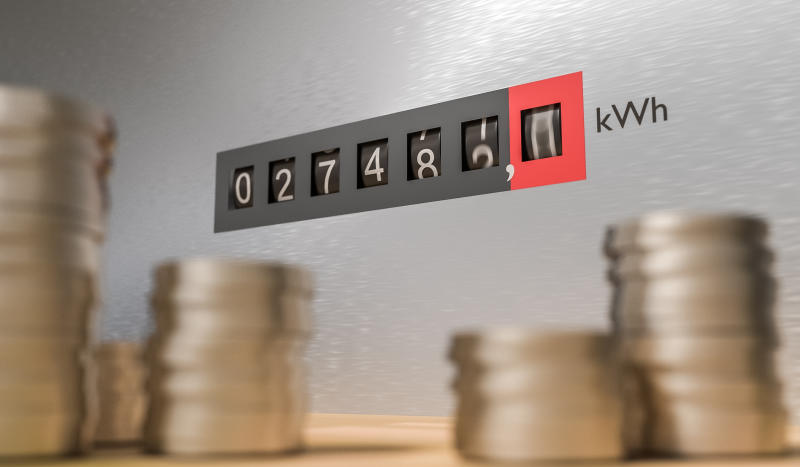 Over the last one and a half decades, the rate of new connections to Kenya's national electricity grid has been one of the highest in Africa and possibly the world.

The number of households and businesses with access to power had grown to 7.2 million of June this year from 686,000 in 2003.

New electricity connections registered the highest growth in the current decade when the current administration started implementing the Last Mile Project, which lowered connection rates to Sh15,000 for new consumers within 600 metres of a transformer.

This saw new additions to the grid peak at 30.5 per cent in 2015, a trend sustained over the next three years.

Why State bid to cut power bills could short the circuit

Although this has now slowed to about two per cent growth in the year to June 2020, Kenya today has among the highest electricity access rates in Africa at 79 per cent of the population.

The government plans to achieve universal connectivity by 2022.

This was a departure from the previous scenario where new consumers catered for all infrastructure costs, which played part in growing the number of utility firm Kenya Power’s customers. 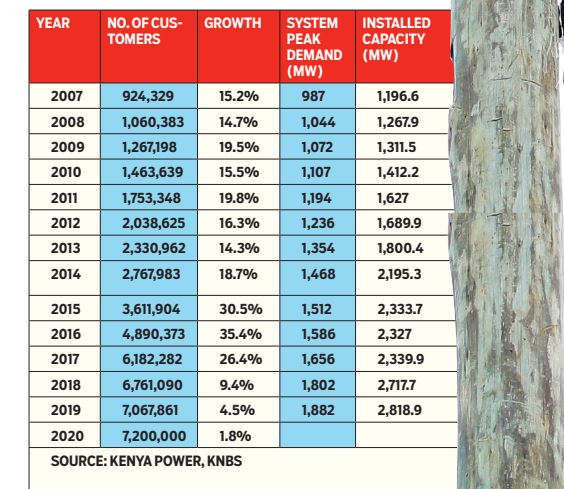 This, according to Kenya Power, is because the new connections are mostly low-income households that on average consume about six units of power per month, meaning they pay the company about Sh100 over the period.

Thus, while the country has made strides in the social welfare front by connecting a substantial chunk of its people to electricity, revenues from the sale of electricity by Kenya Power do not correspond with the strides made in connecting Kenyans.

“Majority of the new connections are for domestic rural customers under the Last Mile Programme. The consumption of these customers is on average about six units per month, which explains the low revenues. The company is undertaking customer awareness and education to promote the use of electricity aimed at driving demand,” said Kenya Power in written responses to shareholders who, during this year's annual general meeting, questioned the high number of customers, while the company struggles to make profits.

The company has been seeking a hike in the subsidised lifeline tariff, which sells power at Sh10 per unit (Sh15 when taxes and other costs are loaded) to low income or generally consumers who use under 100 units of power every month.

This is in comparison to Sh23 per unit that consumers who use over 100 units pay.

The lifeline consumption threshold, which is meant to cushion low-income households, was increased from 10-kilowatt hours (kWh) to 100kWh in November 2018.

“About 6 million customers (87 per cent) are under this consumer (lifeline) category," the Energy and Petroleum Regulatory Authority (Epra) told The Standard recently.

"The energy charge rate for these customers is Sh10 per kWh. In addition, they also pay other pass-through charges and taxes. The authority is committed to ensuring that only prudently incurred costs are passed on to consumers. For example, the total bill paid by a household consuming 10kWh is about Sh156 per month.”

Energy Principal Secretary Joseph Njoroge explained that while it might not seem a good idea for Kenya Power, which is partially private, to go after consumer segments that give it little revenue, it is strategic for the government in meeting its social welfare obligations.

The PS said the move could also translate into earnings for Kenya Power in future.

“Why does the company connect low-income households? There is a correlation between power consumption and the growth of any economy. Markets with a high per capita consumption of energy tend to post high growth in their Gross Domestic Product,” he told Kenya power shareholders during the AGM.

Mr Njoroge added that access to electricity can be a catalyst for growth and urbanising of towns, which is in addition to facilitating the growth of different economic sectors.

“At the moment, consumption in some places may not meet the economic threshold, but as time goes by, these will be places we will see grow into urban centres and provide employment for our people,” he said.

“The numbers may not look good for an enterprise but as government, we must look at both the social welfare and economic welfare of our people. The Last Mile and rural electrification are also not funded by Kenya Power. The government finances both the operations and capital expenditure of these projects.”