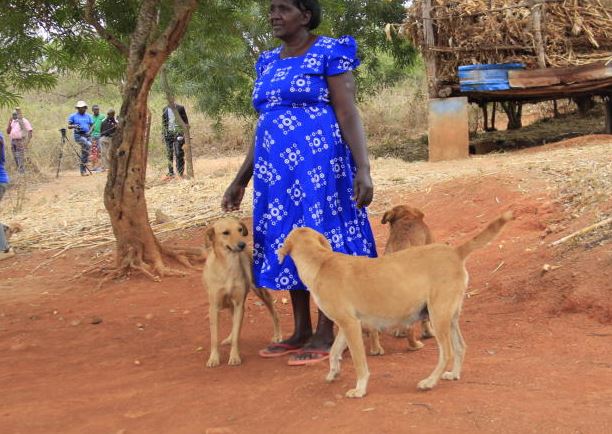 A strange aggressive behaviour from a goat made Joyce Wayua assume it was on heat. The day before, it had difficulties feeding and she had informed veterinarians.

“By the time they arrived, the goat was so aggressive it chased us. It is the neighbours who helped us put it down (kill it),” she says.

The veterinarians took samples from the carcass and later instructed us to bury it deep. She had a chama the following day where she planned to slaughter two of the 11 goats she had.

“I was asked to buy goats elsewhere and it cost me Sh15,000,” she adds. This was a cautionary measure as Wayua hails from Nthangu, Makueni County, where rabies is endemic.

It was the same case for Jane Musyoka (pictured), who had to put her bull down and forfeit Sh10,000 she expected from selling it.

While Wayua has no idea which rabid dog bit her goat, Musyoka’s cow was bitten by her own dog.

“The cow was not eating and foam oozed from its mouth,” says Musyoka of the 2018 incident.

The cow was tethered away from others and samples collected from it turned positive for the virus. And just like Wayua’s goat, the cow was also put down after it exhibited paralysis.

According to Makueni Director of Veterinary Services Daniel Ksee, killing an animal is not the ideal way to deal with rabies but it appears to be the only option available for the farmers.

“For the community, it appears to be the natural thing to do – kill it when you cannot control it,” he says.

To the farmers, killing the animal seems safer to stop the spread of the disease.

Dr Emily Mudoga, a veterinarian from World Animal Protection, says there is no difference in the net effect of a rabid animal bite on humans and other animals.

“The end is death, and usually it is very painful as it effects the brain and neuro-systems. In a normal case, your brain would switch off so that you stop feeling the pain, but with rabies, it amplifies and that is why it is called ‘mad disease,” she says.

Fear of rabies drove Benjamin Mwai to ensure his 11-year-old son, now 13, was given post exposure prophylaxis injections when he was bitten by a dog.

“I took him to hospital immediately since I did not know if the dog was vaccinated. But the owner of the dog said it was,” says Mwai.

There are two kinds of rabies, according to the World Health Organisation: furious rabies and paralytic rabies.

Furious rabies exhibits with hyperactivity and death occurs a few days due to cardio-respiratory arrest. Paralytic rabies accounts for 20 per cent of human cases and is less dramatic and takes longer to manifest.

For this type, muscles gradually become paralysed, starting at the site of the bite or scratch. While rabies is primarily associated with dogs, the viral disease can be transmitted to other animals and humans through bites, or saliva. This means a human can get rabies from a cow, or goat.

According to data seen by The Standard from the Ministry of Health, there were 293,901 dog bites reported in 2019. Of these, 1,042 were suspected rabies cases while 180 persons died from rabies.

On average, there are 2,000 rabies deaths annually as documented in the 2014-2030 Elimination of Human Rabies strategic plan.

“However the cost of vaccinating dogs to prevent rabies spillover to humans is significantly cheaper, with most government veterinary officers providing free dog vaccination in collaboration with partners,” he says.

Muteti Kasenge, field officer with the Kenya Medical Research Institute attached to Makueni County, notes that farmers and dog owners are not well versed with information about the virus.

“They do not know the symptoms so they cannot tell if their dog or animal is infected,” he says.

In animals, he lists aggressive behaviour (even in animals that are friendly to their owners), foam, paralysis, and avoidance of water, especially dogs.

In humans, the symptoms are dizziness, making sounds and aggressiveness, and these can take a month before they show. “For animals, once it shows signs, you just have to let it die,” says Kasenge.