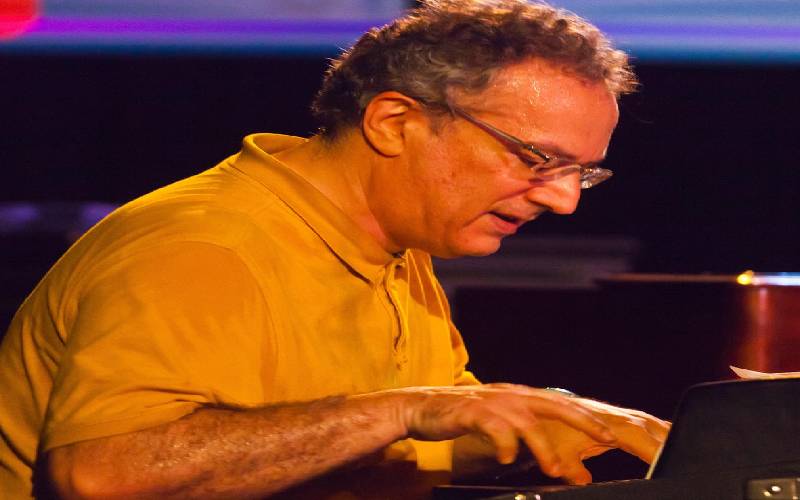 He is endowed with the skills to play simple, well-crafted melodies and complex textures – harmonic and rhythmic – all drawn from his comprehensive awareness of the contemporary as well as the traditional styles he has regularly been navigating whether original pieces or covers. Uri Caine is an intensive pianist at every level.

He understands so many different musical languages and can deal with them with rare ease, moving in and out of phrases without missing a beat. Although a jazz artist of renown, his music in some way defies specific categorisation.

And most jazz fans love this sense of variety. With a career spanning more than 30 years and with over 15 albums as a leader and several more as a session artist, most of his songs are inspired by a mix of styles that have been at the core of his musicianship.

Caine uses all his influences; he works in the same way with ideas of classical greats Johann Sebastian Bach or Gustav Mahler as with Herbie Hancock’s.

In some of his compositions, he reflects and incorporates what happened in the past four centuries of music history. Also, being consistently in a creative musical environment collaborating with other musicians allows him to pick whatever inspires him from each of them.

But quite interesting is his innovative mind – he has crafted a composing method that takes these elements apart to make his own music out of them. He contrasts the enchanting and the common musical facets to achieve a great and complete sound. In a certain way, his music features a psychological dimension, setting up an expectation, then a counteractive element to it.

Saluting heroes whose music has been instrumental in defining the jazz sound has not escaped Caine. Indeed the audience may have changed, but the art of jazz is timeless.

On his albums, such as Toys, Sphere Music, The Sidewalks of New York: Tin Pan Alley, The Philadelphia Experiment, Rio, Rhapsody In Blue, and Two Minuettes (all recorded between 1991 and 2017), Uri Caine confirms that he has come through this process; he is broad in his approach to sound quality and improvisation.

Released in 1999, The Sidewalks of New York, one of his critically acclaimed albums, is a testament of his efforts in the exploration of the pre-history of jazz. He dedicated this album to his grandfather, Edward Caine, who died in 1999 at the age of 97.

The music suggests an ideal music hall in which a multi-cultural cast of performers plays tunes of the roots ranging from 1892 to 1915.

In 1997, Caine came out as a brilliant composer with his Blue Wail album, a mainstream jazz trio session offering a set of eight distinctive originals accompanied by bassist James Genus and drummer Ralph Peterson.

He reveals a personality informed by but never imitative of Hancock, pianists Cecil Taylor and Keith Jarrett, as well as his home-city piano idols and legends McCoy Tyner and Kenny Barron. P

On the Fats Waller standard, Honeysuckle Rose, Caine evokes the spirit of yet another earlier legend, Earl “Fatha’’ Hines’ free-flowing solo performances. Uri Caine, 64, was born in Philadelphia. At 17, he joined the University of Pennsylvania where he studied classical music.

Prior to that, at an early age of 13, a virtuoso French pianist Bernard Pfeiffer became a catalyst of his transformation from an unfocused student to a driven musician.

He also learned his jazz the old-fashioned way, on the streets of inner-city Philly (Philadelphia), playing keyboards on gigs in bars and lounges, and apprenticing with drummers Mickey Roker and Philly Joe Jones, and bassists Jymie Merrit and Charles Fambrough. He also jammed with legends like saxophonists Hank Mobley and Grover Washington Jr. and guitarist Pat Martino. He has even played modern-funk alongside drummer Cornell Rochester and electric bassists Jamaladeen Tacuma and the late Gerald Veasley.

Caine’s music has been inspired by both classical greats – Bach and Mahler – and jazz innovators – trumpeter Miles Davis and saxophonist Sonny Rollins. He can take a pre-existing form on any music and transform it through group improvisation.

He goes for all the different emotions, and he can also get his band-mates listening to the classicist Verdi. For him and his accompanists, it’s about accepting the basis that they’re dealing with – it’s all one thing – but in no way disrespecting any of their songs.

His approach has been for fewer generalizations and more specifics. For budding musicians, the path to creative music comes from studying their predecessors’ recordings hoping they will trigger their own original sounds.

Many aspiring jazz musicians plow through the music of legends such as Jelly Roll Morton, Coleman Hawkins, Benny Goodman and more, whose works are a source for musical nourishments and suggestions for possible new directions.

Some young instrumentalists have established unique styles through interacting and performing with established performers.

As a pianist, composer and recording artist, Uri Caine has achieved a lot by having an open mind to think of his own direction.

He’s been able to express emotionally whatever he feels needs to be expressed.

The rise and rise of internet warriors who kill great ideas