Tense wedding for woman rejected by parents for refusing the cut 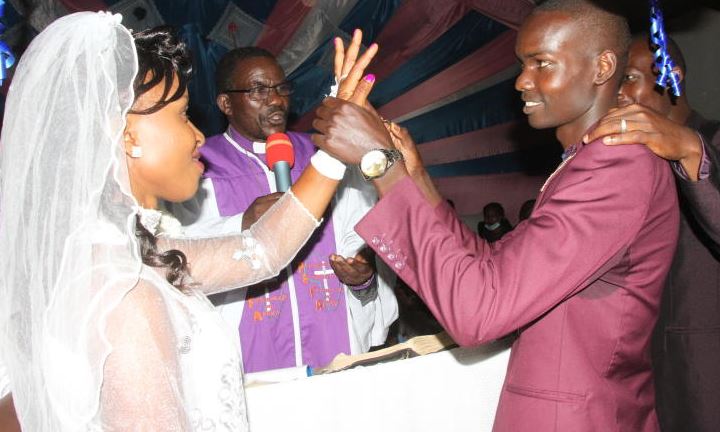 Her wish was to have her father and mother walk her down the aisle and hand her over to her soul mate. This was never to be.

Instead, Mary Nchagwa (pictured), 21, left for her wedding yesterday escorted by armed police officers. Her mistake was to reject the cut which is common among the Kuria community.

Six months ago, Mary pleaded with her parents to let her avoid Female Genital Mutilation (FGM) and bless her marriage. Her parents staunchly refused. Yesterday, at the Pentecostal Evangelistic Fellowship of Africa (PEFA) in Ntimaru, Migori County, she exchanged vows with Zackary Chacha in a ceremony heavily guarded by police.

Mary’s parents had threatened to disrupt the event which they skipped. They described the marriage ‘dirty’ and rejected Chacha’s dowry. Chacha went against the grain and married Mary, despite the belief by conservative Kuria Kuria men that uncircumcised women are not fully matured.

As soon as Bishop Thomas Monati declared the couple husband and wife, hundreds of their supporters filled the church with deafening ululations. “I also received threats through text messages and phone calls not to preside over this wedding, but through the grace of God, and support from security agencies, I am glad we have made it,” said Monati.

“The days of forcing children into circumcision are long gone. The Kuria community has to embrace change,” he said. Mary ran away from her Wangira-Bose village in Kuria East to escape the rite in January this year.

“I had just cleared secondary school and I was told it was time to be circumcised. I had been strong in the church. I could not undergo the cut,” she said.

She was rescued by Robi Marwa, an anti-FGM crusader who gave her a place to stay. Two months later, Mary met Chacha. In March this year, the two lovebirds decided to get married. When Chacha decided to seek Mary’s parents for approval, he stirred a hornet’s nest. The parents said they would not accept any dowry for her unless she undergoes the cut.

“My father works in Nairobi and when I approached the family with the marriage request, my mother who was the only one at home declined to give the blessings until my father had a say in the matter,” said Mary.

Her uncles too insisted on the cut. She narrates: “At first, my father had said I was free to do whatever I wanted, but requested that we wait till the lockdown in Nairobi was lifted so that he could come home to blessing the union. He later changed his mind and insisted on the circumcision.”

Chacha said his parents, despite also being Kuria, were not averse to the nuptials. “My parents have no problem. We are ready to start a family. I also support the anti-FGM movement,” he said.

Ms Marwa wants action taken against the girl’s parents. “The girl is 21 and has a right to chose whoever she wants to marry. The church stood with her. Why did the parents put her through such an agonising experience?” she asked.

Assistant County Commissioner Katana Charo, however, said Mary’s parents did not confirm to him that they were sorely opposed to the marriage because of their daughter’s refusal to be circumcised.

“When I met the girl’s family, they did not outrightly say they were opposed to the marriage because of the cut, although it could be an underlying issue,” he said.

Previous article
Kenya Airways flies deeper into crisis with Sh14.4b loss
Next article
Why 'YouTubers' badly want you on their channel

How FGM is keeping girls out of school in North rift