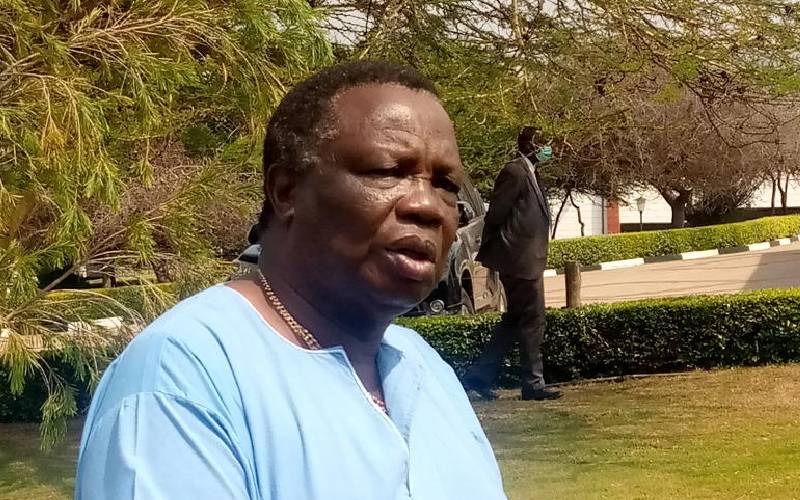 Not long ago, Dr Mukhisa Kituyi described Francis Atwoli (pictured) as an ‘irritant’ and claimed “every time he opens his mouth he just confirms our worst fears; that he has nothing between his ears”.

Waithaka Waihenya, also a journalist, described Atwoli as “blabber-mouthed, temperamental, suffering from siege mentality and sees enemies at every corner he looks... He breathes fire and growls like the king of the jungle…’ and more recently Ahmednasir called him an ‘illiterate goon’.

But just who is Atwoli? There are about four things I am sure most Kenyans do not know about the Cotu Secretary General. One, Atwoli is not semi-illiterate as assumed by some people. He is a fairly educated man. In fact, he has a higher diploma in trade unions from the prestigious Taurin College in Italy. He also has an honorary doctorate degree from Masinde Muliro University.

Second, he is a very close friend of the Kenyattas. And the friendship did not start today. He was a telephone technician attached to Jomo Kenyatta’s Gatundu home for over six years. In fact, he was the only technician Kenyatta trusted to repair his bedroom phone.

Third, Atwoli was not raised in western Kenya. He was raised in Nairobi where he experienced first-hand Nairobi’s post-colonial popular culture.

Here, he experienced the new cultural world and city life — cinema, advertisements, fashion trends, benga music and merchandise, and cafes — all exhibiting varying degrees of conscious and unconscious mimicry generated by the hegemonic authority of Western culture and its negotiations with diverse currents of the Kenyan popular cultural domain. In a nutshell, Atwoli is not a product of the Luhya cultural mold.

Fourth, Atwoli could be the architect of the BBI going by his ‘prophecy’ about the handshake between President Uhuru Kenyatta and ODM leader Raila Odinga. He said on ‘JKL Live’ before the handshake that if he were Uhuru, he would call Raila and make peace with him. “I would give Raila...an appointment...big office somewhere in Upper Hill and he becomes an Africa Union Ambassador!” As such I suspect the BBI has a lot to do with Atwoli.

Fifth, I also suspect that the Kanu agreement with Jubilee has a lot to do with his diplomatic manoeuvres. I hope Kenyans have not forgetten that during the heydays of Moi era, Cotu was close to Kanu, just like Maendeleo ya Wanawake and many other organisations.

But I agree, for those who do not know Atwoli, he is indeed a strange man. Some would say he is endowed with great personal charm, a will of iron, and a soaring intellect while others would say he is a mad man and almost getting old and senile. As I indicated in his biography, looking at his public life, one would say, his life has been a journey of courage, compassion and that of success and even rage.

But what is the secret to his successful political persuasion and mediation prowess? One, as he always says, his belief in an episcopal Christian faith is genuine despite the fact that he worships at the altar of himself. He rarely goes to Church but reads the Bible daily and regards himself as a great defender of the Catholic faith.

Secondly, I presume, he has the privilege of age. He has walked through the colonial and postcolonial eras and is used to reading changing patterns of public life and political spheres.

Third, he possesses linguistic advantage and oratory privileges. Atwoli often uses metaphors, jokes and history to drive his points home and that way the masses believe in him. He yearns for public adulation and knows how to put people in their place. For instance, when he stands to speak about Wetang'ula, he first insubordinates him by calling him with his first name, ‘Moses’ or/and dissects his character and his life story before the crowd.

Atwoli’s instant exposure to a crowd is ‘hypnotic’ and magnetic. He can speak for hours while his faithful audience listens patiently. In his speeches, he digs out the past of a person while raising or dismissing them. Here, Atwoli in particular uses two artistic means of persuasion: What I call ethetic strategies that place emphasis on attack on personal character; and logetic strategies, which aim to persuade the masses through invoking arguments and questions.

His voice is overwhelmingly powerful and spellbinding. It is mesmeric. His speeches, like the one during the BBI meeting in Kakamega, reflect and illuminate the complex processes, memory and collective remembrance and the ways that they mediate and interact with each other in social and historic contexts like that. In addition, Atwoli exploits other genres such as music, poetry, and dance during public ceremonies. I see his speeches as critical examples of epideictic oratory, which normally provide politicians with the opportunity to communicate an understanding of the past as a catastrophe and a great affront of values.

Adolf Hitler once said that men are won over less by the written rather than the spoken word; that every great movement on earth owes its growth to great orators and not to great writers. “…rhetorical geniuses are the drummers of fate. They begin their work alone in dark and dismal historical epochs and suddenly and unexpectedly find themselves in the spotlight of new developments.

Fourth, Atwoli has wide experience gained through international exposure. He served as the President of the Organisation of African Trade Union Unity (OATUU), which consists of 54 African member states headquartered in Accra, Ghana. He is an elected spokesperson and Chair of the East African Trade Union Confederation (ITUC). In addition, he represents the Trade Union Federation of Eastern Africa comprising 14 Eastern Africa countries based in Khartoum, Sudan. He is also a long serving Vice President of the ITUC, which is based in Brussels, Belgium and holds many other positions and affiliations with unions in India and Switzerland. Simply put, he is a man of great international exposure.

In politics, Atwoli cannot be ignored. He is a brilliant orator and a versatile politician. He knows how to take advantage of different political platforms to have his agenda addressed and elevate himself above others. He often jokes  that there are only three people in this country – the president, Raila and himself – and that the rest are “donkeys”.

He possesses immense powers and commands great authority. Sometime back, I stood close to him during a political gathering in Nairobi and I realised how the man is popular with the public and the media. He has learnt skills of ‘working’ before the camera and cultivating public attention. In public gatherings, Atwoli oozes power and those who sit next to him can easily feel it.

Ultimately, Atwoli is the man to watch. He cannot be ignored. He would, among others, determine the next course of political leadership in this country.

Dr Chacha teaches history at Laikipia University and is the author of Fame, Force and Fury: A Biography of Francis Atwoli