Funny, but firm administrator who takes the bull by its horns 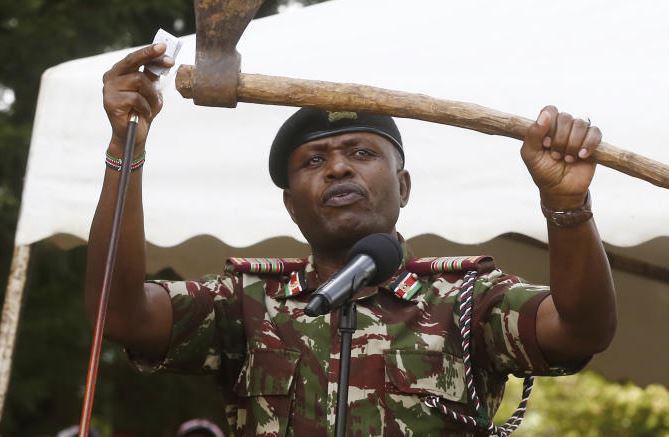 George Natembeya (pictured), the Rift Valley Regional Coordinator, has managed to endear himself to many and at the same time made enemies, almost simultaneously.

If you stopped any Kenyan on the streets at random and asked what they think of Natembeya, many would be unsure of what to make of him.

Some describe him as a strict administrator who does not compromise on discipline, a stickler for the rule of law, perhaps to a fault.

Others, especially politicians, view him as an overzealous administrator – drunk with power.

And yet there are those who would not hesitate to turn up the volume of their television sets or radios whenever he is on air, just to catch up with his latest antics and satirical comments generally about life and his work.

Natembeya does not mince his words, something that has earned him both friends and foes in equal measures.

His antics and satirical comments when addressing issues of insecurity, teenage pregnancy and conservation of forests has earned him a lot of fans.

A few days ago, a four-minute video clip of him lecturing villagers of Nessuit trading centre in Njoro Sub-county about family planning went viral on social media.

His choice of words and the ease with which he conveys the message left his audience in stitches, with some wondering if he is the same no-nonsense administrator with a habit of taking politicians head-on.

“You have lost direction, fighting a war that you do not understand. Ogiek has been lied to that if they don’t give birth to many children they will soon be extinct,” he says in the video.

The occasion was a peace meeting, following ethnic clashes that had left six people dead, scores injured and dozens of homes torched, over issues to do with land.

And in May this year, as the country grappled with the coronavirus outbreak, Natembeya was at it again.

Incensed by the rising cases of teenage pregnancies as a result of the Covid-19 pandemic, the tough-taking administrator told chiefs that they will be held responsible for any teenage pregnancy reported in their jurisdictions.

“Where were you when they got pregnant? You are the authority, make sure you arrest the culprits before they impregnate the young girls.”

He said it was the responsibility of chiefs to know what was happening in their areas of jurisdiction. Natembeya thinks he is not funny at all, saying when it comes to matters security and issues affecting the people he does not compromise.

“Matters security come first for me. I do not compromise on discipline and I follow the law to the letter,” he says.

These attributes, he says, are both anchored on and reinforced by hard work and strident honesty.

“If people find my comments funny and the message is home, so be it. The important thing here is to pass the right message to the people,” he says.

Sometime last year when addressing a security meeting in North Rift, Natembeya declared that chiefs and their assistants who fail to tame perennial cattle rustling to “wake up from slumber or ship out.”

“Criminals cannot joke with the Government, how does a chief know the woman who got pregnant in the night and fail to know an armed criminal?” he said.

In January 2019, when serving as Narok County Commissioner, Natembeya caused a stir when he declared that there would be mandatory examination of schoolgirls genitalia to determine if they have been circumcised, with dire consequences.

He says his firmness on security matters and other issues affecting the people was adopted when he was a junior officer working under then Internal Security Minister John Michuki.

“Everything I know (public service) I learned from the late John Michuki,” Natembeya says.

Those who have worked with him say Natembeya is never shy to speak his mind.

“He is one man who will never hesitate to tell the truth no matter how bitter it is. He follows the law to the letter and always holds his juniors to account,” says a senior administrator who has worked closely with Natembeya but who did not wish to be named.

In the recent past he has become synonymous with Mau Forest reclamation and conservation efforts.

Within a few months of his elevation to regional coordinator, Natembeya successfully spearheaded the eviction of illegal settlers from the Mau Forest complex to pave way for the restoration of the the vital water tower.

He has won accolades from conservation groups and enemies from the political class, especially those representing evicted communities.

And even as politicians call for his head, Natembeya has taken the bull by its horns and says he is ready to suffer the consequences.

Former Prime Minister Raila Odinga burnt his fingers attempting to clear settlements to conserve and manage Mau Forest. Raila’s attempts cost him the support of the Kalenjin in the 2013 General Election.

But Natembeya has succeeded where others failed. He has driven settlers out of the Maasai Mau Forest, a section of the 427,000-hectare complex.

His attention is now on the Eastern Mau Forest where the eviction of some 20,000 families has sparked ethnic conflicts in five villages in Njoro Sub-county.

Led by Kajiado East MP Peris Tobiko, the leaders said the appointments by President Uhuru Kenyatta shows the trust the government has in the Maa commu