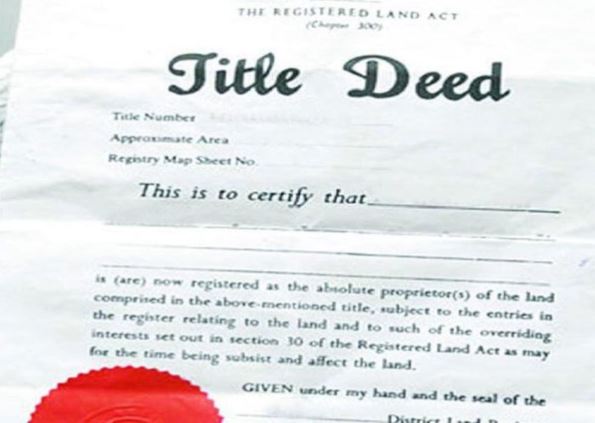 A simmering row between a couple that had lived on a piece of land for 60 years and a mysterious man who came with eviction orders to claim the parcel, was the topic of a gruelling discussion.

Should the couple be hurled out of the land? What if the man was the real owner of the land and the couple had been squatters all along? Where was the claimant since independence? The debate raged for days.

If indeed the new claimant legally owned the land all those 60 years, the intruding couple might have to appear in court as the owner is certain to sue.

But they could also stay put courtesy of a form of land acquisition and possession known as adverse possession.

Adverse possession refers to a situation where a person occupies land, asserts rights over it and the person having legal rights in and over the land omits or neglects to act against such possession. It is premised on the principle of limitation of actions.

For adverse possession to succeed, it must be open, hostile and continuous (uninterrupted) for a period in excess of 12 years. The Limitation of Actions Act bars a person from bringing an action for recovery of the land after that period.

The concept of Limitation of Actions borrows from the Equity and Common Law of England and is based on the equitable doctrine of laches, which is an unreasonable delay by the plaintiff in bringing the claim, based on the maxim that "equity aids the vigilant and not those who slumber on their rights”.

The interest of the occupants of the land is considered ahead of those of owners of documentation who do not seem in desperate need of the property.

Cases abound of people buying land only to find that at the time of making the purchase, a third party had encroached on the land and was counting years to the lapse of a 12-year period, which would allow them legal ownership of the land.

In 2016, a Peter Kamau lost his piece of land in Kilifi after suing a squatter who was erecting permanent rental houses on the land.

Mr Kamau, who had bought the piece of land from a John Ngaruiya 11 years earlier had noted, barely eight years after the purchase, the curious developments on his farm.

On closer scrutiny, he realised that Emmanuel Tinga had lived on the land since 1996.

In protest, Kamau went to the High Court, which however ruled that he had not taken any legal action to kick Mr Tinga out of the farm within 12 years of the latter’s stay on it.

An appeal to the Court of Appeal yielded the same results; the decision of the High Court was unanimously upheld.

Ibrahim Mwathane, who chairs the Land Development and Governance Institute, says the rise in the cases of adverse possession claims might indicate increasing awareness by Kenyans that they can use this legal opportunity to acquire land by just sitting on it and letting time pass.

“In March this year, a Malindi court upheld a prayer by some 240 squatters who sought to acquire land from a housing firm through adverse possession. Just recently, a widow lost a Sh100 million piece of land in Mtwapa on account of adverse possession,” he said.

Loise Nduta, a widow, had sued Aziza Said Hamisi for taking her land in Mtwapa, Kilifi County, which had been bought by her late husband in 1972.

The judges ruled that Ms Nduta had no claim to the four-acre parcel of land having failed to develop it since 1972.

The court thus granted ownership to Mr Hamisi on grounds that she had stayed in the disputed property for more than 12 years and was entitled to it by way of adverse possession.

“Since she (the plaintiff) neglected to take steps to recover the land within 12 years, the law is very clear that her title to the property was extinguished," ruled the judges.

"There is evidence that the original owner has been in quiet possession of the land and we have no reason to interfere with her occupancy.”

The judges relied on Section 17 of the Limitations of Actions Act which provides that once the period of 12 years of adverse possession has expired without an action to recover the land, the title of the registered owner of the land stands extinguished by the operation of the law.

Absentee landlords - those who purchased parcels of land and left them unused for large periods of time - might be in for a rough time in case a third party found rests on the land.

Such a squatter will sit pretty on the land and, at the end of 12 years, will lay claim to it. More people are becoming aware of this provision and using it as a profitable loophole to seize land from owners who neglect their land.

Perhaps this is the reason why some people who own huge chunks of land are increasingly completely shutting out squatters, and on top of it erecting warnings against trespass.

The squatters must also be living on the land without the owner’s permission, which satisfies the condition of ‘hostile’ occupation.

The Court of Appeal recently ruled that public land cannot, however, be acquired through adverse possession.

“For the landowner to successfully defend their land against claims of adverse possession, the third party’s stay must be evidenced by facts such one having allowed them entry, or there being an agreement which shows one gave them permission to stay on that land," says Mr Mwathane.

"Also, if one has gone to court to try and force them out, and can demonstrate that they filed a legal suit. In such circumstances, the third party cannot successfully lay claim to the land.”

If one can demonstrate that they have also tried other means to evict the squatters without success, then the adverse possession claim cannot stand.

Property lawyer Peter Mburu, who teaches at the University of Nairobi, says a landowner should keep in touch with neighbours so that they can relate the piece of land to him or her.

“Proper title to land is where your neighbours respect the relationship you have with your land,” says Dr Mburu.

“In case you notice uninvited occupants, chase them out of your land. In case they do not move, register a caveat on your property or get an eviction court order. If you never noted uninvited occupation in all of 12 years, then you deserve to lose it on grounds of absentee ownership.”

Squatters are now learning to acquire land through prescription, which is the process of making a claim to land by long use and enjoyment of the same at the expense of a seemingly disinterested owner.

For landowners, great vigilance is needed if they are to avoid losing their land out of kindness to squatters or simply negligence.