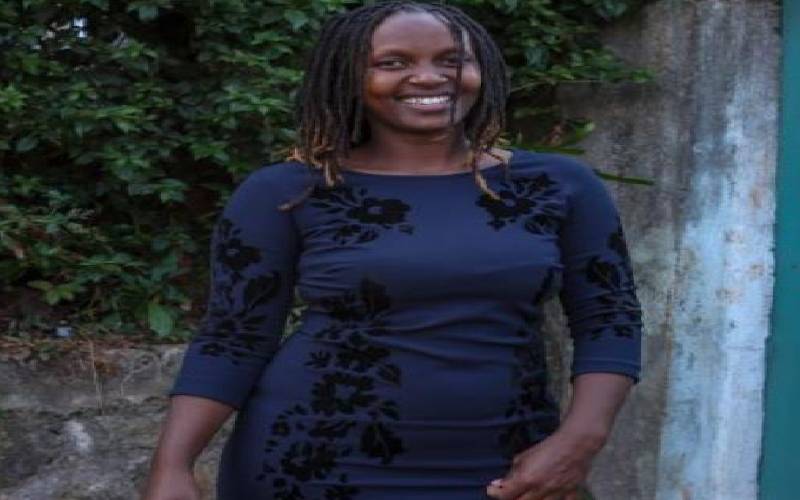 When Njeri Muchina lost her job in March 2018, she would find herself plunged into a sea of hopelessness. She had been working as a sign language interpreter at MediaMax and now, for the first time in her life, she was jobless. Having worked for non-government organisations before, and armed with a credible degree certificate in Social Work from the University of Nairobi, she didn’t think that it would have been so hard to catch another break. But boy was she wrong.

“Seated idle at home in Limuru, I could not understand why my friends had gone silent when I was at my lowest.”

The pity party would last for seven months before she realised that it was all up to her. Today, she owns and runs Max Hub, a cleaning company based in Meru. The young company recently bagged the International Women’s Day grant, one of six African businesses awarded, for creating employment opportunities for women.

Njeri shares her business journey with Hustle hoping that it will inspire those grappling with economic setbacks because of the pandemic.

An opportunity presented itself in October 2018. But it was in Meru. A friend told me about it. It had been a good seven months out in the cold and I was desperate to get working so I packed up my bags and moved across the country. What I didn’t realise at the time was that the opportunity wasn’t all I had hoped for.

It was an insurance brokerage job. I went and applied for the job, and was, fortunately, picked. When I reported for training, I heard people testify about their previous month’s earnings. The job was paid on commission terms, and the highest had made Sh12,000 that previous month. I am not very good at marketing, so I knew it was not my place.

I left the training frustrated, certain I was not suited for the job.

But you were now in Meru with no job….

Yes. I needed work, and to make money. I remember boarding a matatu to Makutano, a little centre 15 minutes away from the town. On my way there, a plan solidified in my mind. I was going to clean people’s shops and get paid for it. I would charge Sh50 per shop cleaned and maybe could manage to wash 10 shops in a day for good measure. It felt like a good idea.

I entered the first shop and told the attendant that I wanted to clean for her. Seeing my immaculate attire, she suspected I was something of a con and dismissed me. She also had her next door neighbour dismiss me too. I wasn’t about to give up. I headed to a cyber cafe just paces away and explained my plight to the woman who ran it.

Midway through my pitch, my daughter’s school called me and told me that I was required to send Sh500 for her graduation gown. She was moving to pre-unit. Desperate and with no money on me, I broke down. I needed things to work out.

Was the pitch successful?

Yes, I was lucky. For Sh50, I cleaned for her. Next to her shop was an animal-feeds shop. Kimathi, the man selling there, saw me crying, then mopping the cyber, and came to ask what the matter was. I explained to him.

He told me to share my cellphone number so he could call me later when he contacted potential clients. He called the following morning, and I came to find some women that wanted to see me, more to believe in the story they had heard than to hire me.

They asked how much I charged to clean a shop and Kimathi said I charged Sh100. I cleaned four shops and earned a quick Sh400.

Ruth, one of the women, later took me to her house to clean and left me there. Such trust at first sight. I gave my best and was done in three hours. She was so impressed she gave me Sh1,500. I was elated!

Fact is, many university graduates will cower at the thought of cleaning for money. Did you feel embarrassed?

There was no time to feel ashamed or consider what people were thinking about it.  I needed money and I needed to work.

People looked at us as cleaning women, but that has become part of my motivation. It is one of the things I am trying to change.

Did you go back to cleaning shops?

No. An impressed Ruth told her friends about me. Word spread like wildfire and I got referrals right, left and centre as elated clients told their friends about me. In just two weeks, I was booked back to back. Ruth advised me to charge nothing less than Sh 1,000 for house cleaning. I was giving the best I could.

How did you handle the upsurge of demand?

I soon found and trained Rukia, who clients liked. I also hired another woman called Faith and taught them how to do a clean, diligent and honest job for our clients. By March 2019, I had six employees. I had a solid agency, “Klean Team.” I could make up to Sh3,000 a day cleaning two houses and charging Sh1,500 for each.

Was that the big break?

No. One of my doctor clients invited me to bid for a cleaning job in one of Meru’s top hospitals. I made my pitch, presented my budget and, luckily, won the tender. The annual contract was actually renewed last April.

Are you still doing home cleaning?

Yes, but not entirely. 2019 was an awesome year. My company, now called Max Hub, grew, and we stopped doing laundry manually. We bought machines, a vehicle, and started delivering cleaned, ironed laundry to clients, packed in branded bags!

What’s the status of the company now?

I have 12 employees, four of who work in the hospital. Three employees are based at Mwitu Centre, where we manage the public area that has prime offices, a leading supermarket and public toilets. Two women are tasked with managing the toilets and cleaning the park, while a man does landscaping.

I also have four women who do home cleaning, and a man who does the laundry deliveries.

(Laughs) Certainly! This place gave me a lifeline. Within a year I had bought a car and rebooted my life. I owe a lot I have to this place.

What lessons did this fast-paced two years teach you?

Do not just sit pitying yourself for long! Out there hidden in the humblest hustle is the biggest opportunity of your life!

If you have lost a job, have graduated and don’t have anything to do, or if you have a gift or talent, start with whatever you have.

Clean those clothes, iron those suits, make those chapatis, cook those mandazis. As long as you are trying I promise you, you will move to the next level. I am happy I can impact someone’s life by giving them a job.

What money lessons have you learnt through your journey?

One should be very disciplined. Save for a rainy day because rainy days will come. It is so easy to move from a hundred to zero, but hard to move up from zero. When one is used to having a salary or income, it is easy to forget that they need to save. Respect money and it will respect you. However, one has to use money to make money. In some instances, don’t just save. Keep on expanding. In my business, sometimes I have to invest in new machines as work increases.

The attitude of clients towards cleaners. It was really demoralising at first. I cleaned a house for a woman and she said she would pay a maximum of Sh400. My standards deserved more, between Sh1,000 and Sh1,500, and she already knew I charged that. But she eventually said that a cleaner did not deserve that money.

There has also been the challenge of male clients. Some do not treat this business as a professional activity.

Goals for the business?

Expansion. I want to reach out of the county and enter Embu, Laikipia, and other nearby counties. I want to be a household name in the cleaning business. I came here as a desperate job seeker, ready to survive on crumbs. Now I am an employer. I want to give back. I am actually considering starting a programme where I can teach women on a certain standard for home cleaning so that they can gain maximum value for their service. In essence, change the perception that is given to the cleaning women and make the job professional.