Spending Sh1,000: More Kenyans are working for finer things in life, not just for food 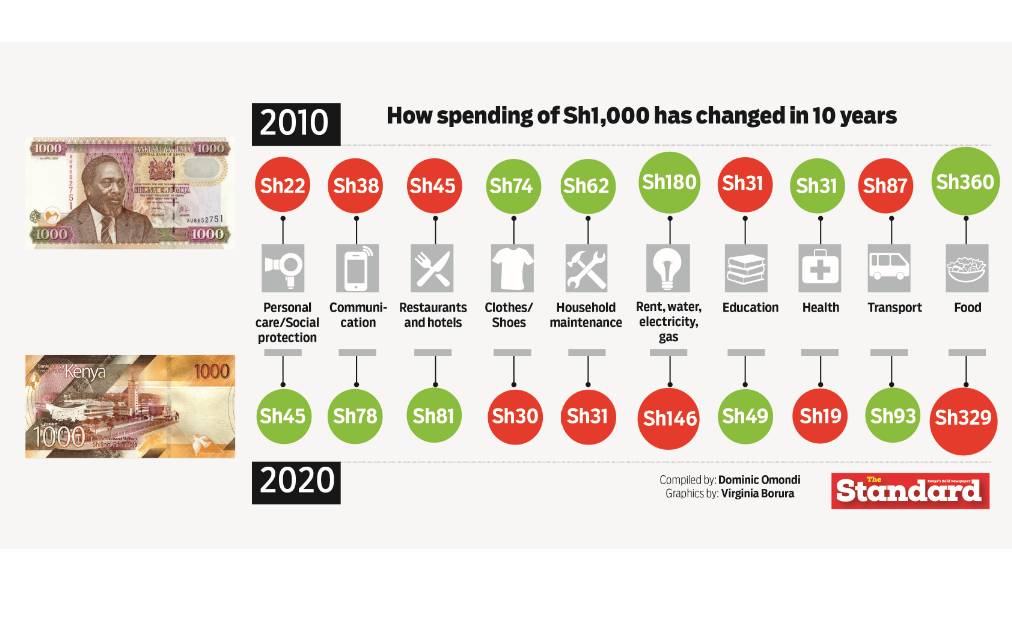 Now, communication and dining out are being found increasingly worthy of people's cash, an analysis of data from the Kenya National Bureau of Statistics (KNBS) shows.

Basically, an improved standard of living is cheaper to attain today than it was 10 years ago.

However, by global standards, food still takes up an overly large chunk of Kenyans’ income - more than a third of the money spent goes to food.

It is worse for the poor in Nairobi for whom out of every Sh5 spent, Sh2 goes to buying food. For the rich in the city, food accounts for just about half of this amount or 17 per cent of their income. This rich-poor divide in Nairobi when it comes to food is replicated across the country.

Compared to 10 years ago, fewer Kenyans are living from hand to mouth. Further, any of them are spending less of their hard-earned income on food, rent, clothes and shoes, or even lighting, house maintenance, cooking fuel and health.

In 2010, a typical Kenyan consumer would spend close to 70 per cent of their income on food and non-alcoholic beverages to nourish their bodies. Clothes, shoes and rent would take up another sizeable chunk of cash as they sought to insulate themselves from the vagaries of nature, such as cold, rain and heat.

Things have since changed.

Today, just slightly over half of their income is spent on what American psychologist Abraham Maslow described as physiological needs.

Lowering the amount that Kenyans spend on food is one of the drivers behind President Uhuru Kenyatta's Big Four Agenda. One of its pillars is to ensure citizens enjoy food security and improved nutrition by 2022 by boosting production, and thus bringing food costs down.

This, the government hopes will see the cost of food as the percentage of people’s incomes drop from a high of 47 per cent in 2017 to 25 per cent in 2022.

As it stands, however, the biggest change in spending habits has been the share of cash that goes towards buying clothes and shoes. Today, this takes up Sh30 for every Sh1,000 that a typical Kenyan spends, a drop of 60 per cent from the Sh74 that these items gobbled up 10 years ago.

Household maintenance - which includes buying furniture, washing carpets, fixing a sink or buying TV set or radio - has also registered a decline of 50 per cent, taking up Sh31 out of Sh1,000 compared to Sh62 a decade ago.

“Government policy initiatives on universal healthcare together with other policy measures led to an increased usage of NHIF ... almost doubling of the usage of insurance services,” read part of the report.

Rent, water and electricity are still a big cost burden for most households, but these items are taking up less of people’s incomes, with the average household putting Sh146 into these items from Sh1,000 compared to Sh180 just 10 years ago.

Kenyans are putting more of their money into airtime than even rent - which had the heaviest weight three years ago - health or education.

Transport is another area that has benefited from the surplus income after spending on the three basic needs declined. The review of CPI by KNBS showed that matatu fares is the second weightiest consumer item in the new basket.

But there is also the boda boda, another big purchase item. Its popularity has been driven up by its ability to get around traffic. Also, a lot of Kenyans in major towns like Nairobi, Mombasa and Kisumu are increasingly using taxis, especially ride-hailing cabs, to move around either for business or leisure.

With more people going to work, there is a budget for hotels and restaurants, which have become popular locations for dates and striking of business deals. The coronavirus pandemic, however, risks upending the gains made on this front.

Expenditure on personal care and social welfare has also gone up, as has spent on garbage collection.

Schools also grappling with the challenge of offsetting debts owed to suppliers.