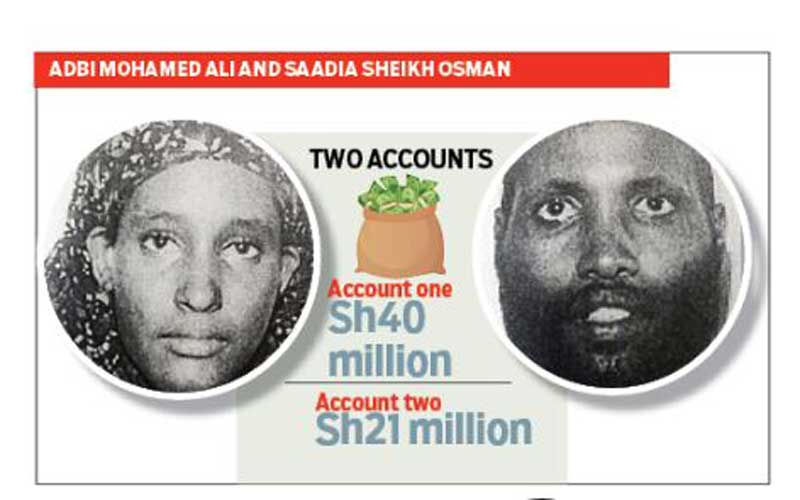 Honey is sweet, however, it gets even sweeter when you get it to drip millions of shillings into your bank account.

That is the excitement you get each time you count more millions deposited into your account from multiple sources. That is the sweet tale of a livestock production officer, working at Mandera County, whose wife has collected millions in bank accounts, whose source he cannot explain.

Another trader, also from the same county, had questionable transactions worth Sh384 million, which has attracted the Asset Recovery Authority (ARA) to file a legal battle at the Anti-corruption court.

Meet Abdi Mohamed Ali, a director of livestock production, who ensures animals are well fed and are producing enough milk and when they die, either by the butcher’s knife or natural causes, he assesses the carcass to determine if it can be sold as meat or buried.

Abdi is married to Saadia Sheikh and the couple has 12 children and an equal number of grandchildren. He shoulders the cost of educating ling 10 children, who are in secondary schools. Shiekh, on the other hand, is contented being a housewife.

Abdi has a heavy burden of paying school fees and other costs of maintaining such a large family.

Despite all these needs, Abdi and Sheikh operate two bank accounts, whose cash they have never touched. The two would boast of being the rare millionaires who have Sh62 million lying idle in the bank.

“The said bank accounts received suspicious cash deposits in Kenya shillings and the funds are suspected to be stolen and/or fraudulently acquired from Mandera County by the respondents, their agents or representatives and deceitfully deposited in the said accounts,” a lawyer for the Asset Recovery Agency argued.

It is these colossal deposits to the accounts that attracted ARA, which demanded that Abdi explain how he made his millions. The Muthoni Kimani-led agency has since gone ahead and frozen the two accounts.

The secret to the unused cash in the account, according to Abdi, is it accrued from proceeds of selling honey, cereals, and camels. However, he has no documents, receipts or persons to corroborate his story.

The court papers showed that Abdi has never withdrawn even a single cent from the accounts at Equity Bank. He explained in his statement before the court exclusively seen by The Standard that he only knew the person who delivered the honey and nothing more.

Moreover, Abdi said he got millions from two companies that allegedly had construction tenders with Mandera County. The first company, Al-Kowthar Construction deposited Sh1.9 million into his account while Platinum International Limited banked another Sh2.1 million.

However, he said he had no knowledge of the two companies he was dealing with had any deals with his employer.

Court papers filed by ARA lawyer Jeniffer Gitiri indicate the deposits by the millions were only from the sale of honey.

There were some two transactions in one account, which he jointly opened with his wife that got Sh2 million twice, then the tranches reduced to hundreds of thousands. The deposits would sometime be made in three intervals within a day.

Abdi explained that the bank, at one point, refused to accept his millions and advised him to split the money into batches. Asked why he never withdrew from the two accounts, Abdi said he was saving for retirement.

After the court froze the accounts in February this year, Abdi sought redress to access his money, saying he was being unfairly subjected to untold suffering. He argued that the disputed money were deposits from his customers and savings spanning 35 years.

He explained that he has permits to trade in livestock and was willing to provide a paper trail of the funds.

“The freezing of my client’s business accounts continue to greatly prejudice the applicants’ business, family and personal affairs. It subjects them to excessive financial embarrassment,” argued Abdi’s lawyer Robert Asembo.

“The applicant’s life and businesses have stalled owing to the inability to meet routine and urgent business obligations since the frozen accounts contain money meant for the discharge of business and life overarching and already overdue.”

Abdi and his wife are not the only ones who are in trouble with ARA. One Ali Abdi Ibrahim, a man who claims to be a businessman, has a load to explain. He needs to provide proof of how Sh455 million from the same county ended up in his two bank accounts.

After sleuths analysed his accounts, they found Sh3 million from one Abdi Maalim. After asking Ali to explain what the money was meant for, he replied he does not remember why it was being sent to him.

Ali has two accounts at Equity. In one account, a total of Sh168 million was wired while in the second one he got Sh216 million. However, at the time ARA went after him, they only had Sh42 million.

His story surrounds a deal to construct Mandera County headquarters. He allegedly owns a company known as Risala General Contractors alongside one Mohamed Yakub Issak.

On April 23, 2018, Governor Ali Roba led the county to seal a deal with a firm called BAMI investment for a total of Sh455 million to construct its headquarters.  BAMI is allegedly owned by one Baashi Maalim.

According to court documents, three days after BAMI signed the contract with the county, on April 26, 2018, it subcontracted Risala to carry out the project at a tune of Sh364 million.

In the report provided by Ali to ARA, the agreement was that BAMI would pay the contract amount to his personal account no 1000176315716. In this account, he received Sh134 million from BAMI. And there was a second account, 10001193921283, which was not provided in the contract and which got Sh75 million. The invoices he provided were in his name and not Risala.

“Analysis of the statement of accounts revealed several transactions of deposits into the respondent’s accounts were from several companies, which receive funds from Mandera County in a scheme of money laundering and to conceal proceeds of crime,” argued ARA.

Ali got Sh24 million from Kurte and this was transferred to him immediately after the firm received funds from the county. He got Sh11 million from Frontier Limited, a company which is co-owned by Abdi Kadiri Khalif and Hassim Khalif.

To explain the transaction, Ali said he had loaned them Sh15 million. ARA argued he did not have proof to his claim.

From Bluesky, he received Sh6.2 million and this too he said he had loaned one Ali Ibrahim Guracha. Green County wired Sh5 million to Ali’s account and he explained it was payment for Sh11 million loan to the owner, Kullow Mohamed.

Tough times for learners at home

Study by Uwezo Kenya shows only 20 per cent are taking online, radio and TV lessons.