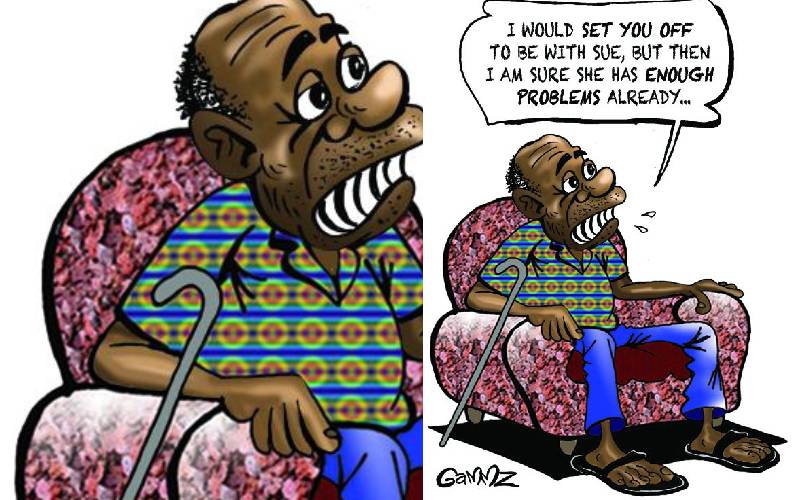 Now that I know that Harold has money stashed away in onshore accounts, I decided to make a protestation this past week. I have not had any source of income for years and I have dedicated my services to my uncle, who pays me with food and shelter, the former too little, the latter unsafe.

You may remember that the last two rainy seasons, I have had to take shelter in the church. The roof above my room leaks, and mosquitos love to spend nights with me.

I do not mind their biting, only their music is a bit too disorganised, and they chant the same thing every day, over and over again which, if you ask me, is a bit boring.

I sat with Harold in a high-level breakfast meeting where food was served for one and after a word of prayer, in which he asked God to remember those that do not have food, like myself, and bless them with some, I tabled my issues.

“I am disconcerted by the fact that in spite of you making hundreds of shillings, you do not give me any salary, and I truly believe I deserve to be paid.

In light of this, I am tempted to jump ship and offer my advisory services to Sue, who will be battling you,” I said.

I expected to see a startled Harold jump and fall off his seat. But he calmly licked his avocado seed, belched, then shovelled a spade of rice into his mouth.

“According to the Constitution, I should enjoy human rights like everyone else and should be paid for all the services that I offer you.”

Harold stashed cabbage in his mouth and chewed furiously. For 20 minutes I read excerpts from the Constitution I drafted and threatened to help Sue with the campaigns.

She would pay me, I argued, and if Harold needed me to pay rent for living in his house, no problem, I would afford it.

When he was done eating and had ordered me to take the utensils in the kitchen sink, he cleared his throat and looked at me.

“Look, young man. If you were to protest, you would have started by refusing to take these utensils to the sink,” he said.

“But you just stood up and walked all the way. First things first, I do not talk when eating, and neither do I listen. So what were you saying?”

Harold always talks while eating and I have to keep ducking as particles of cereal keep flying my way. I repeated everything I had told him, including rereading the Constitution, which gets amended at least twice a day.

“You understand, young man, that there is little I can do to prevent you from going wherever you want…”

“But you have always prevented me from leaving…”

“Every product has its expiry date, you know. Maybe you have now outlived your usefulness. Fetch me some water,” he said.

I rushed to the kitchen, overcame the temptation to get him water that had already been used in cleaning the utensils, and returned to the table with a full glass.

Harold rubbed his soles against the cassock which, two days in the week, is used as a rug.

“Listen, Pete, I could let you go any minute, but then, unlike Noah’s son Lamech, I am a grateful person,” he said.

Harold has this tendency of quoting Bible verses wrongly or making them up.

“I would set you off to be with Sue, but then I am sure she has enough problems already.

So I will keep you here and in addition to the huge budget I incur for your food, will also pay you.”

What Uncle Harold will not tell you is that he is scared to imagine me leaving him and joining Sue which would seeing as I am the best political strategist in the place, make her bid stronger.

So we agreed that starting next Sunday, all the money that will be collected from TV watching in the afternoons will be mine.

Harold said this because he knows that since Sue launched her TV, no one comes to watch inside the church.

I make an appeal to all people of goodwill to come and watch Tottenham battle Newcastle United today; your contributions may build me a new castle and help me escape slavery by Harold. ?

Unlike women, most fathers nursing the hurt of child loss have few channels of opening up besides increased alcoholism.

For 490 bob on economy on the SGR train, you quickly drop off at the pristine Mtito Andei terminus.