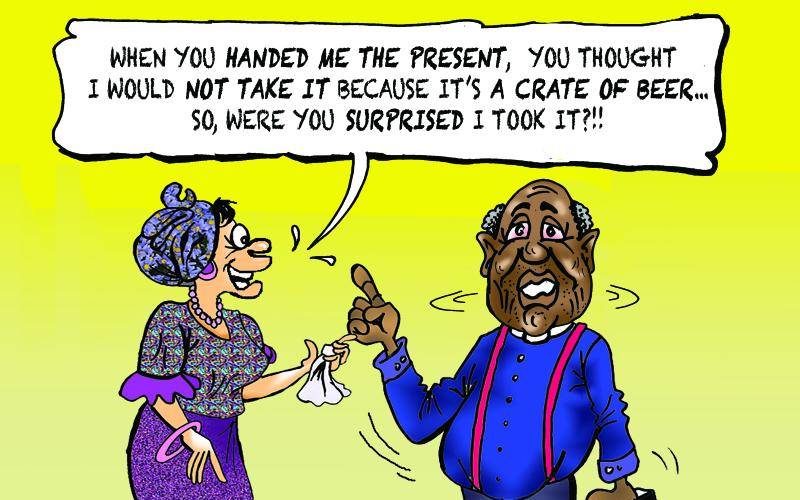 The moment we have been waiting for is here. Finally, politicians who have been holed up in posh bunkers in city suburbs can now retrace their steps back to their villages and sit among commoners.

Suddenly, roast maize, mama mboga’s bananas and matumbo are not giving them stomach upsets. These delicacies would, at other times, have them flying to London or India for specialised treatment.

The same is happening in my village. Harold, the high priest who walks with a bounce in his step and who does not dine with other sinners except me, is now available for everyone.

There are two reasons for this. One, he is broke and being in people’s houses will ensure he has something to eat.

Harold, Sue in all-out appeal to voters in rival churches

Two, and most obvious, is to make sure he can win more votes than his nemesis Sue.

After Ferdinand Omanyala, Kenya’s new sprint sensation, ran an impressive 9.77 seconds and obliterated the African record over 100 metres, key politicians were quick to associate with him.

Watching from a distance, Harold, who is a slow learner but had managed to learn in 9.77 seconds, knew exactly what he was supposed to do.

“Make a champion and get everyone talking about them,” he told me. “Then make sure to associate with the new superstar in public.”

We organised a singing competition quickly. The person who won it was not only going to be awarded by our beloved priest; they were also going to compose and sing Harold’s campaign songs.

The village announcer, yours truly, walked around the village, entering homesteads and informing them that on Saturday, we would have a singing competition and that the winner would take home a surprise award.

In the evening, at Sue’s, Harold made the same announcement to fellow revellers, the majority of whom were not listening anyway as they watched a repeat of Arsenal’s rare weekend victory in the TV Sue bought to kill Harold’s chances of winning them over.

But when I walked around the village the next morning, I could hear hums inside kitchens.

All week long, Harold and I walked into homesteads and helped in random tasks: fanning fires, mending fences and emptying plates.

As Saturday approached, Harold realised he did not have enough money to sponsor the singing competition. He approached Sue for a loan. He did not get it.

She was willing to help, however, but that was only if she would be a co-host. And it would be announced publicly that the award had been given by Sue.

Harold, on advice from yours truly, declined the offer. With nothing to sell to raise money for the awards, I hatched a plan.

Harold took a crate of beer from Sue on credit. That would be the top prize.

I trained a panel of judges ahead of the competition. We decided who would win three days before the competition. But yesterday, the person who we had planned to announce as the winner failed to turn up and the first runner up was promoted.

This was the plan: pick a winner from among the most consistent adherents and hand them the beer. They would turn that down, and Harold would tell them not to worry, and promise that the person would be the face of his campaigns.

Harold would also announce that the person would compile his campaign song.

They came in their numbers, and they performed. Our predetermined winner, a choir leader, suffered a sore throat but still won by the judges’ unanimous vote, a controversial decision. We handed her the present, a crate of beer, and, to our surprise, she took it.

That went against the script, and I will be spending this week negotiating with the choir leader to give up her gift for the chance to be part of Harold’s campaign.

If unwilling to, she can take her beer and head to Sue’s church Believers Entertainment and Enlightenment Retreat (BEER); we are tired of losing in our own games.

Mutahi Kahiga: Teacher who found himself in the hot seat

If everything had gone according to plan, Kahiga would be a deputy governor, but then life rarely follows a script.