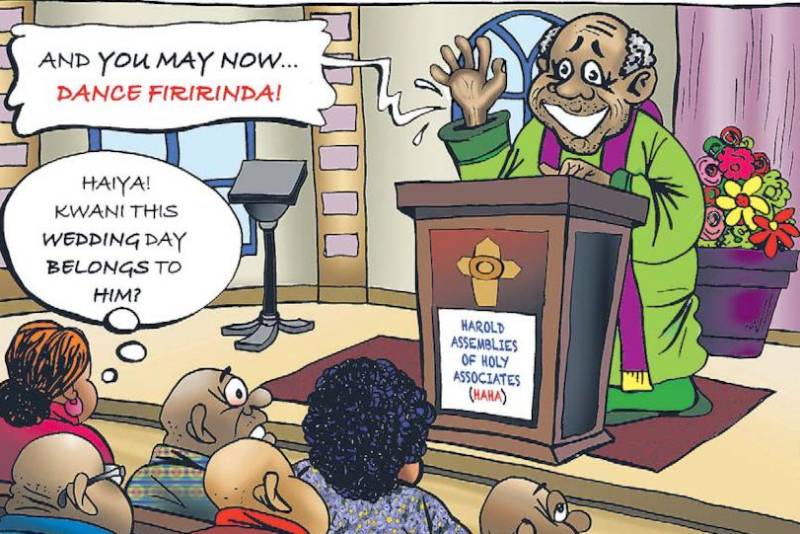 Yesterday, Harold had a rare colourful day. He presided over the first wedding of his lacklustre career.

He spent the week watching videos of weddings that have happened across the world, including traditional ones from Mongolia. He also practised the viral Firirinda dance, which he planned to make the newlyweds do.

While the wedding day is believed to be the lovebirds’, evidence has it that the day actually belongs to the presiding man of God.

He speaks the most, orders everyone around and determines whether the cake is cut at midday or night, when all the pianist, grumbling openly, wants is a piece cake, and maybe a few girls to notice him. The pianist carts his machines away when the cake cutting is delayed by an over-enthusiastic pastor and the only music is from crickets welcoming the hours of curfew.

Harold is this typical pastor who talks everyone to sleep.

At an event a year ago, Harold made such a long, boring speech that the audience refused to clap.

He rumbled on until it started raining, and when a series of thunderclaps interrupted his speech, he bellowed: “You can keep the claps to yourself. Heavens knew I deserved better.”

So, yesterday. Njoroge, son of Ndumia, had managed to convince Stephanie, Sue’s sister, that they could make a successful couple.

While one of them is in contention to have the local pub they frequent renamed after them, the other is the most consistent youth council member in Harold Assembly of Holy Associates (Haha) church.

At the church, they arrived one astride a mule and the other in the belly of a jalopy that just about made it to the church compound before it breathed its last. A battalion of cake-hungry villagers waited, singing to welcome the bride, some even mooting the idea of belting out Firirinda that early in the morning.

Harold, in his blood-red cassock, stood smiling by the church entrance, rehearsing the vows, and replaying in his memory the wedding procedures he had watched on YouTube.

When one member of the choir led in the singing of O When The Saints Go Marching In, Harold gave me that smirk he gives when Southampton plays. Southampton, nicknamed The Saints, have the tune for their anthem, the only thing Harold knows about football.

As he walked the bride and groom in, the congregation ululated. As you would expect, Harold got lost in the frenzy, wrongly believing the cheers were directed at him.

He mouthed a dozen “thank yous” in the long saunter to the altar. Sue stood in for her mother, clasping Stephanie’s hand almost as if she did not want to let go of her sister anywhere near Harold. Her mother had requested to be let free so she could break into a dance when Firirinda finally came up.

I knew he had misplaced something, and I knew what. I walked briskly to the front and handed him a paper on which the vows were scribbled.

My march forward was met with an anxious silence, everyone seemingly fearing the worst.

But in Harold’s eyes was relief, as was in Sue’s. Then the vows started.

It was all smooth until the real Harold showed up: “For better, for wars… for richer, for poorer… till death do its part.”

The groom was just happy to get it out of the way, but the bride was perturbed, and stammered through the words, feeling something in the vows was not right.

Then it came to the point Sue’s mother and a lot of us were waiting for.

I had written the instructions clearly for Harold, under his watch, but had managed to sneak in a few lines so the wedding would not be all drab.

Harold stuttered. He had read something I had sneaked in.

His brain was working at the speed of light as he tried to navigate the situation. “And you may now…” he paused again.

“And you many now… say the Grace,” Harold finally announced, and I could see beads of sweat on his brow.

A surprised congregation said the Grace, but Njoroge and Sue’s mother, as did yours truly, stared at Harold in disbelief.

The reception was inside the church compound later in the afternoon, and Harold insisted he was going to be the emcee, to no one’s amusement.

Time came for cake cutting. After he had instructed the bride and groom how to do it (in this case it was cutting the loaf, we did not have cake) Harold came across another line in the paper I had handed over to him.

It was the same line that had given him paralysis during vow taking.

The last time, before a cock crowed, came at the tail end of the ceremony, at dusk.

I had written it, again, and after Harold had done his last prayer, he encountered it. Again.

He paused. This time, no escape. I waited with bated breath.

Then he gave a cheeky smile.

“And you may now… dance Firirinda!”

United States Soccer on Saturday voted to end a ban on players kneeling during the national anthem, to protest racial inequality and police brutality.