Single fathers have it rough 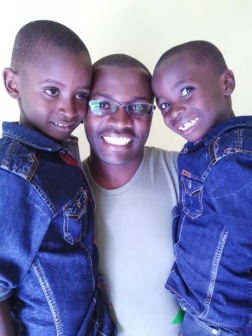 When I joined Safaricom in 2012, I was a single father of two boys, Jesse and Shukrani (pictured). My marriage had hit rock bottom when I was still young and destabilised me a great deal.

I had sleepless nights and thought-filled days. I was quite distant from many of my peers, who were single, married or in functional relationships. Often times, I felt so alienated from people because of my status.

The biggest problem was slelf-stigmatisation. I was feeling that I had lost a special part of my life that I would never capture again.

The second problem was the stigma from other people who were judging me. Single parenthood comes with its own complications, which I think tend to be more overwhelming for men. Many a time, the society does not readily accommodate us or understand our world.

My objectives were very different from my peers and I felt like I was in my own corner.

I was segregated from my peers and even the few people I interacted with were always judging me, and their view of me was not positive.

But there was a ray of hope in the form of my manager, Peter Mathenge, who was very supportive.

He understood me, and my situation more than anyone else had ever done.

I was battling the incidences of infant illnesses from time to time and balancing this precariously with my job; not to mention the common issues with house helps. It was a confusing time for me!

Since people did not know the real story and what I was going through, they could not offer support because they did not understand my pain or joys as I journeyed on.

I would go to work with my mind racing and spend most of the day struggling to stay on course and put in a day’s work.

But as I began to share my story with people, many of them became my friends and started rooting for me.

Some of them even recognised the sacrifices I was making for my children and would openly encourage me — this has kept me going.

When the company began training in diversity and inclusion, many people began to reconsider and reshape their relationships with others while observing the various challenges that uniquely define us from one another.

I am particularly grateful that this is happening — and I might have been down, but I am not out.

A guide for fathers with teenage daughters