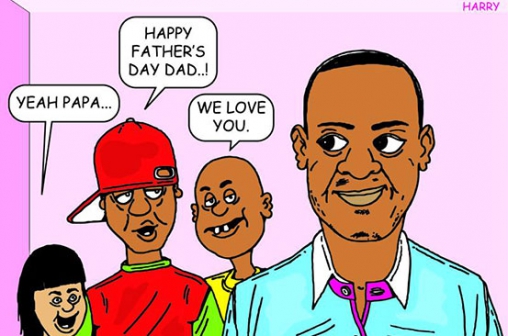 I did not know of the very existence of a Father’s Day until my editor called a few days ago and suggested that I dedicate this week’s column to its edification.

I was a bit alarmed because for a global entity to decide to dedicate a day to a matter or an issue suggests that it is in some sort of danger and humanity therefore needs to be reminded of its importance.

So, would Father’s Day therefore place paternity in the same league with, say, Environment Day or World Hunger Day?

For people of my generation and those who came before us in my community, paternity — not to be confused with fatherhood — was taken for granted.

If a girl became pregnant out of wedlock and was pressured by her people to name the father, she did not require Justice Mumbi Ngugi’s edict on birth certificates for the person she fingered to assume official responsibility.

From the many young men in the village who had smiled at her, she picked the one she liked most and hoisted the honour on him. For his part, the honour of the young man so favoured demanded that he vigorously deny responsibility.

Normally, unless that young woman was particularly wayward, the matter was however decided quite swiftly with the local DNA experts ruling in her favour.

And the matter was sealed and thereafter, the young man gained a ‘murugi’, or cook and a child into the bargain.

On his part, the young man responded — retaliated is the more appropriate word — to the turn of events by proceeding as if nothing had changed except perhaps to eat the food grown and prepared by his new wife.

After all it was the woman’s responsibility to labour for her family while the men spent their time drinking the local brew and performing other nation-building duties.

That is not to say that there were numerous normal, functional families where men work hard and contribute to the upbringing of their children. This is still the case.

But traditionally, the father figure in many homes was a distant, forbidding person that mothers used to threaten children whenever they crossed the line. “Wait until your father hears about this,” was a common threat in many homes.

My father was a businessman when I was growing up and was away much of the time.

His infrequent visits were not occasions for joyous family reunions for my siblings and I but were something to be dreaded except for the new clothes he brought us and the occasional delicacy such as bread, was which not part of the normal diet.

He firmly believed that a man’s duty was to feed, clothe and educate his children and in the case of boys, to pay the bride price when the time came. Beyond that, the less he saw of you the better.

He was a harsh man who quoted the Bible when meting out punishment. But, according to him, he was a great improvement on my grandfather, a man with two wives and a large brood whom he kept in line with indiscriminate violence and terror.

I know few people of my time who truly loved their fathers. Respect yes, but not love.

Any surprise, then, that many of these people turned into little despots when they got families of their own?

Of course, the times we live in are a far cry from the norm during the times of my father and grandfather.

I am not only expected to spend quality time with my children but to also help them with the homework and take them on weekend outings when the finances can permit.

I would like to believe it is to the modern-day parents of my kind that Father’s Day is dedicated, and not to the endangered despots of yore.

Sometimes the poorest man leaves his children the richest inheritance - Ruth E Renkel. I belong to a group whose agenda is to visit our parents in appreciation of the role they have played in our lives.