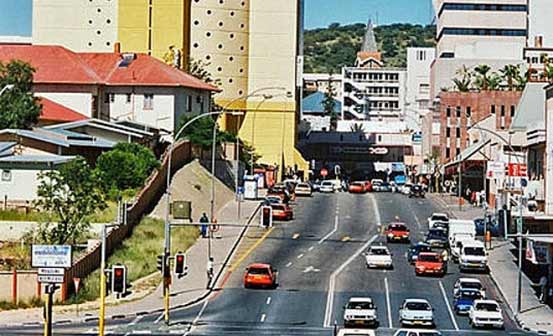 I arrived in Windhoek as the golden glow of the sunset reflected on the city’s skyline.

With its population of 322,500, Windhoek is ranked among the smallest national capitals in the world — it ranks 150th from the list of 243.

At first sight, Windhoek is one African city which has the look of a provincial town. It has a few high rise buildings but then, Namibia gained independence on 21 March 1990 and has more years of challenges and development ahead.

Call it an accident or a strike of meticulous German colonial planning, the Namibian capital is located at the geographic heart of the country and is surrounded by rolling mountains in the east, west and south.

Although the city is largely the springboard for wildlife, desert, beach safaris in the rest of Namibia, it is worth a visit in its own right. The city still bears reminders of German colonisation in language, architecture and gastronomy which include traditional dishes, bread and beer.

In some parts, there are so many Germans you can be forgiven for thinking you are in Berlin.

Windhoek is a laid-back city during the day with locals enjoying café culture.

I sat in one such cafés to enjoy watching people walking on the pedestrian precincts and vendors selling their wares. Together they possess a wonderful sense of national pride in the new Namibia.

Windhoek’s main attractions include the National Museum, Chiristuskirche or the Christ Church and the once segregated Katutura suburb where under the then South Africa’s strict apartheid 1950s policy only whites could live in.

Today, people from all races and cultures live together harmoniously in Katutura as they do in the rest of the city.

Namibia’s national monuments, which are mainly in Windhoek, are a constant reminder of the long struggle for independence and the end of apartheid. Many have been preserved as a reminder of the country’s bloody history while others celebrate independence.

At the Heroes Acre, one is constantly reminded of the 86-year-old Father of the Nation and Namibia’s First President Dr Sam Nujoma’s words “The blood of all these sons and daughters of Namibia watered the tree of our liberty and will always be remembered by present and future generations of the Republic of Namibia.”

Opened by Dr Nujoma in August 2002, the monument covers over 732 hectares and houses 174 graves of fallen war heroes and heroines.

Also worth visiting is the Christ Church built in 1907. It is the oldest Evangelical Lutheran Church. It is built in the neo Roman style using Italian marble at the entrance; it has bronze bells, stained glass windows and an altar that was donated by the people of Germany.

The Roman Catholic Church, built in 1903, is another attraction which has been constantly maintained and modernised.

The old prison building which was built in 1907 and used as a gaol until 1963, is seen by many visitors as an interesting place. It had 35 single holding cells and five communal ones.

Namibia has not yet been invaded by mass tourism like its famous neighbour South Africa, its former colonial power. Namibia was first ruled by the Germans who committed a genocide against the tribal Herero people and set up concentration camps.

The British intervened in 1915 by asking South Africa to take over the country. By then, thousands of Germans had settled there and their ensuing generations continue to live in Namibia.

A truly wealthy country, Namibia has been gifted with diamonds. For many centuries, a force of nature brought diamonds from South Africa by washing them down the Orange River to the sea along the area which forms today’s border between the two nations.

The gems were carried from the mouth of the river to the north along Namibia’s coast where they were discovered at the turn of the 20th Century.

Pensioner Jorge recalls his father telling him stories of how diamonds lay under his feet as he walked with his friends in some places around Luderitz town where they were discovered in 1908.

Miners used to collect these glittering stones by the handful and did not allow others to pick them. Today, these are highly protected areas. Namibia shares not only the inhospitable and desolate 1,570 kilometre-long Namib Desert with some of the biggest sand dunes but also the colourful coast of the Atlantic Ocean.

Another place worth visiting in Swakopmund, a dusty wind-swept seaside town on the Skeleton Coast 351 kilometres from Windhoek. It is also known as Namibia’s playground and a holiday destination for tourists and locals seeking an escape from the hot weather of the interior where temperatures can shoot up to as high as 36 degrees Celsius.

Swakopmund resembles a small German town in the tropics with its palm tree-lined streets, seaside promenades, galleries, museums and eateries.

Those seeking adrenaline-inducing adventure can go to the desert surrounding Swakopmund and enjoy sand-boarding, quad-biking, parasailing and other guided activities. They can also join dolphin cruise at the nearby Walvis Bay or explore the beautiful lagoon. You must make it a point to travel to other parts of the country to enjoy a truly fascinating part of Africa.

Should corruption be legalised?

Well, there are many corrupt yet successful people among us, and very few of these people ever get punished. This has led me to think of some positive benefits of corruption.