Memories of a young Uhuru 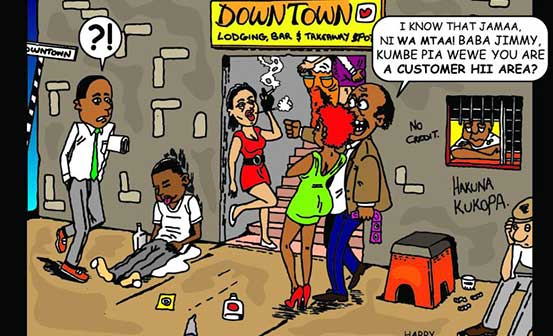 I have watched in amazement the transformation of Uhuru Kenyatta from a publicity-shy young “prince”, an aloof public servant into a flesh-pressing American-style president who goes out of his way to charm.

This change has taken place in a span of less than 20 years from the time when, as a gangly fellow with youthful features, he unsuccessfully vied for the then Gatundu parliamentary seat in 1997 and a local periodical cheekily headlined the failed bid, Not yet, Uhuru!

I actually had the opportunity to meet the young Uhuru some years earlier and to observe him at close quarters, and he never gave an indication of the man he would grow to be.

In early 1995 I was editing Autonews, the official journal of the Automobile Association whose publisher at the time was Dennis Larkin, now late, an Englishman of patrician bearing I had met some years earlier. Larkin’s office was in Loita House on Loita Street, from where he managed a chain of tented-camp hotels owned by the Kenyatta family and also moonlighted as a publisher. For purposes of producing the magazine I was offered the occasional use of a corner of an office I shared with a foul-tempered man who business, I gathered, was selling bottled water — when he was not railing at someone over the phone or at me.

At the time I was in between serious jobs and so preferred to operate from Meru and only travel to Nairobi for the week or so it took me to put the publication together.

For accommodation while in the city, I relied on cheap lodgings located away from the city centre and being almost always short of cash, I needed to visit Larkin’s office often to plead for salary advances.

That is how I happened to be in his office at about seven one evening ostensibly to give a status report on the magazine’s but more compellingly, to plead for a “small something” to tide me over for the night.

We had gone through the charade many times before with Larkin pretending to patiently hear me out as I pretended to give my progress report, while actually waiting for me to state the real purpose for the visit.

As per script, after listening to my plea for a small advance “just this once,” he would dismiss me with a wave of the hand and say with a superior upper-crust English voice that I could die in the street for all he cared. Then I would cajole and wheedle some more and to get rid of me, he would remove a cash advance book from a drawer and get me to sign before peeling off some notes from a wad and handing them over.

This evening the script did not run its course because at the point where I should have been condemned to die in the street for all Larkin cared, the door was opened and a man strode in with an air of importance.

I immediately recognised in the visitor the son of Jomo although he neither greeted Larkin, into whose office he had so unceremoniously barged or acknowledge my presence.

It was left to the flustered Englishman to make some sort of introductions.

“This is Benson, a journalist of note,” he said more as an apology than an introduction. “And this is our chairman.” The chairman did not deign to acknowledge the introductions, and I was unceremoniously shown the door to give room for serious business. On the way out of the building and wondering how to pay for my accommodation for the night, I had a moment to give thought to the unlikely alliance between the two men I had left behind. One was the son of a celebrated nationalist who had paid dearly for Kenya’s independence, while the other was a former colonial administrator who as District Officer at Runyenjes, Embu District in the early 1950s, had planned and overseen the infamous Kathageri massacre of freedom fighters.

An uncle of mine was one of the few Mau Mau fighters who survived the massacre, and I wondered at how swiftly yesteryear’s foes had turned allies.

Kenya Revenue Authority (KRA) was once an enviable institution. It had the most attractive and desired working environment in public service.

By Jessica Stern | 1 day ago