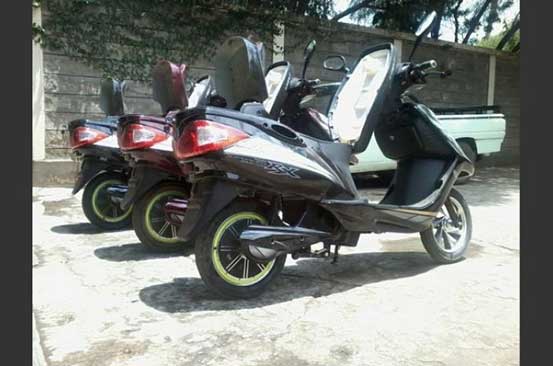 KISUMU: As motorcycle taxi operators wait for passengers in Urudi village in Kisumu County lounge on their various machines, Alfred Omondi’s plug-in electric scooter stands out from the crowd.

Surrounded by motorbikes running on polluting fossil fuels, Omondi sits astride his solar-powered rechargeable motorcycle, which uses technology developed by students from the University of Nairobi.

Charles Ogingo, Robert Achoge and James Ogola — all final year students — have built a system they call Ecotran, which captures the sun’s energy, stores it in batteries, and uses it to charge a motorcycle’s electric motor.

The three students have set up a “fuelling” station with 40 solar photovoltaic units, each generating 250 watts of electricity. The energy is stored in batteries before being transformed by powerful inverters into the alternating current needed by the motorcycle.

The motorbike uses a small portable battery which, fully charged, can run for 70 kilometres, after which it must return to the station to be recharged while another charged battery is fitted to the bike.

The students, who have set up a company called Pfoofy Solar Ltd, put together their system in 2014 at a climate change innovation centre at Strathmore Business School, where they had been sent to give practical form to their ideas.

After successfully trying out the Ecotran technology on three locally bought motorcycles in Nyakach area in Kisumu early this year, the young innovators are now expanding the project, and powering 40 more bikes.

“We were awarded $100,000  (Sh 11 million) by the United States African Development Fund and Power Africa for the ingenious innovation. It is this money that we are now using to upscale the solar project,” said Pfoofy Solar manager Achoge.

The new motorcycles are imported from China. The students will lease the bikes to 40 riders who they have trained in road safety.

Most motorcyclists like Omondi, have no bikes of their own but ride leased machines.

Omondi, who used to ride a petrol motorcycle, said he used to make Sh 1,000 on a good day, but would spend about Sh350 on fuel and another Sh300 to lease the bike from its owner.

Now it costs him Sh 100 to recharge the electric motorbike, saving him money even as he helps the environment by curbing pollution and climate-changing emissions.

“The only challenge is that this electric bike has low acceleration and cannot work in hilly terrain,” he pointed out. Ogingo, a mechanical engineering student, agreed that the technology promises lower operating costs as well as environmental benefits. Taxi motorbikes are a big industry, employing thousands of young people. The World Health Organisation estimates that between 2005 and 2011, motorcycle registrations in Kenya increased almost 40-fold, and that by 2011 motorcycles made up 70 per cent of all newly registered vehicles in the country.

In Nairobi the number of registered motor vehicles stood at 2.25 million in 2013, many of them older vehicles emitting relatively high levels of pollution.

Shem Wandiga, a researcher at the University of Nairobi, said air pollution can damage residents’ health in highly polluted areas such as Kisumu and Nairobi.

Illness and deaths linked to air pollution cause economic losses of $15 million a year, according to a 2014 study in Nairobi by the University of Nairobi; and in Kenya, 39 per cent of air pollution is caused by motor traffic, the study said.

Today’s mother juggles various activities and has many responsibilities. At the beginning of my journey, I recall wondering if a woman could truly do it all successfully, and whether there was a woman who had mastered the balancing act.

By Caroline Nyanga | 20 days ago

By Mercy Kahenda | 20 days ago