Where to get a beer? Bars packed amid Qatar's alcohol limits

Chris, a British fan in Qatar for the World Cup, tried to order a beer with his dinner at a kebab joint on Sunday. He was quickly rebuffed.

He sighed and settled for a lemonade instead. “If I were a few years younger, I wouldn’t have even come to this World Cup,” said Chris, a 34-year-old sales manager from London who declined to give his last name for privacy reasons.

The question of where to get a drink, a fixture at sporting events around the world, in the conservative Islamic country has been top of mind for many fans since Qatar banned the sale of beer in stadiums on Friday in a stunning about-face. As a result, many of Doha’s bars and nightclubs — one of the rare places fans can get alcohol — were packed with crowds and had their tables fully booked on Sunday as the tournament kicked off with the match between the host country and Ecuador.

“We are super full,” said the hostess at Aqua Lounge bar in the Marriott Hotel. “It is painful to turn guests down.” The Irish Pub said the weekend has been “crazy.” DT Nightlife Club on the Corniche, a palm-tree lined boulevard along the Doha waterfront, advised fans to “come as early as possible, or else it probably won’t be possible.”

“Nope, not a chance you can get in,” said the hostess at the Belgian Cafe, another trendy spot in the city.

The rush on Doha’s bars reflects the tensions tearing at the Muslim country and challenges facing the tiniest host of the world’s biggest sporting event. Crowds already have overwhelmed the FIFA Fan Festival, now one of the only spot fans can get beer outside of luxury hotel bars. Qatari officials say the festival area has capacity for 40,000 people — a fraction of the visitors expected at peak times during the tournament. On Saturday just after 8 p.m., police turned away thousands of fans.

The unusually exorbitant price of alcohol has also dismayed many accustomed to a beer-fueled tournament.

“Man, we’re missing the beer,” said 48-year-old Fabian Cruz from Ecuador as he wandered around Doha’s city center. He said wouldn’t try to squeeze into the fan zone again after the chaos the night before and couldn’t stomach the thought of downing multiple $14 beers at his hotel.

As a result, he faced the very real prospect of having to attend the opening match — which pits his country against Qatar — completely sober. “We don’t even need a lot of alcohol. But we need some.”
The question of where and how to get alcohol has dominated World Cup fan WhatsApp and Facebook groups. Many swap tips about how to sneak liquor into the country. Some share success stories of pouring arak, a strong anise-flavored liquor, into empty bottles of hand sanitizer buried in their checked luggage. Others report their bottles were confiscated at the airport.

“Of course we’re disappointed,” Ritu Mohan from England said of the stadium beer ban, adding he’d be scouring the street for bars with an empty table on Sunday night. “But we should have known what we were getting into when we heard Qatar was hosting.”

Share this article on social media
Previous article
EXPLAINER: Islam's ban on alcohol and how it's applied- plus what does the Quran say about alcohol 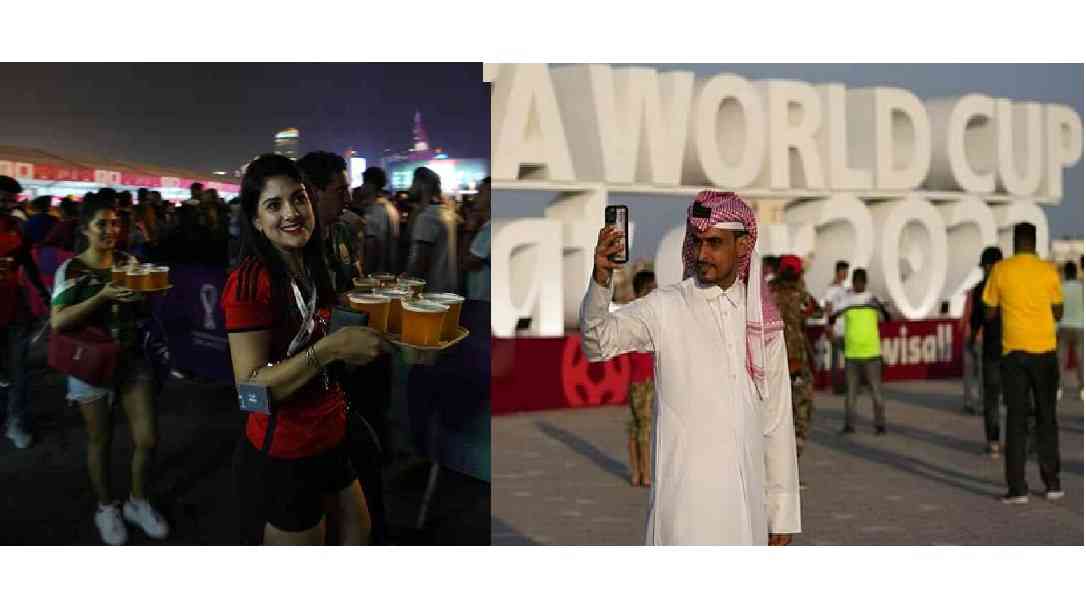