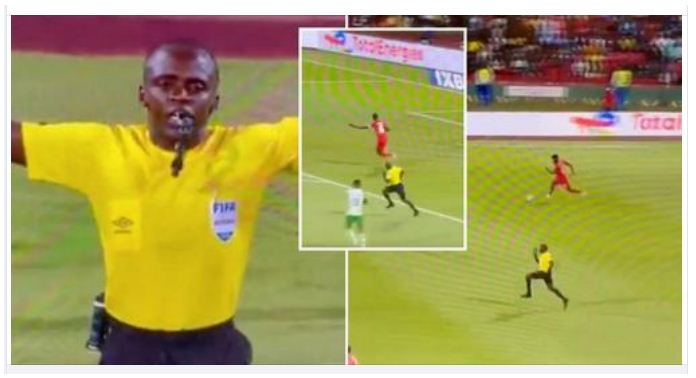 As the 2022 Africa Cup of Nations head into crucial quarterfinal stages, it is worth mentioning that football fans across the globe who have been watching the have been treated to a fantastic spectacle.

From referee blowing for full-time in the 85th-minute, holders Algeria crashing out with just one point to their name and Achraf Hakimi’s outrageous goal, Afcon has truly entertained fans.

However, the crème de la crème of them all was witnessed in the match featuring tournament favorites Nigeria and Guinea-Bissau.

The Super Eagles were leading 2-0 against Guinea thanks to second half goals from Umar Sadiq and William Troost-Ekong when Kenyan referee Peter Waweru left fans both on the pitch and watching at home in stitches with his ridiculous running style in the 89th minute.

Waweru has gone viral for his quite brilliant running technique in the later stages of that match.

With a straight back, high knees and flapping arms, Waweru sprinted during a Nigeria counter-attack set play from the opposite goal creating a buzz from fans on social media.

This is not the only time Waweru has grabbed the headlines after creating an earlier buzz with his excellent academic profile.

Waweru is a Mathematics Professor.

He is also a senior lecturer Teaching Pure and Applied Mathematics at Jomo Kenyatta University of Agriculture and Technology.