Pirlo’s appointment came hours after Juventus sacked coach Maurizio Sarri, following the team's elimination from the UEFA Champions League in the round of 16 on Friday.

The Italian legend signed a two-year contract until 30 June 2022.

“Today, begins a new chapter of his career in the world of football, as it was said almost a week ago: from Maestro to Mister. From today he will be THE coach for people of Juventus, as the club has decided to entrust him with the technical leadership of the First Team, after having already selected him for Juventus Under 23.

“Today's choice is based on the belief that Pirlo has what it takes to lead from his debut on the bench, an expert and talented squad to pursue new successes,” Juventus said in a statement.

Born in Flero in the province of Brescia, Pirlo (41-years-old) had a legendary career as a player that led him to win everything, from the UEFA Champions League to the World Cup in 2006.

In his four years at the centre of the Juventus midfield, Pirlo won as many league titles, a Coppa Italia and two Italian Super Cups. 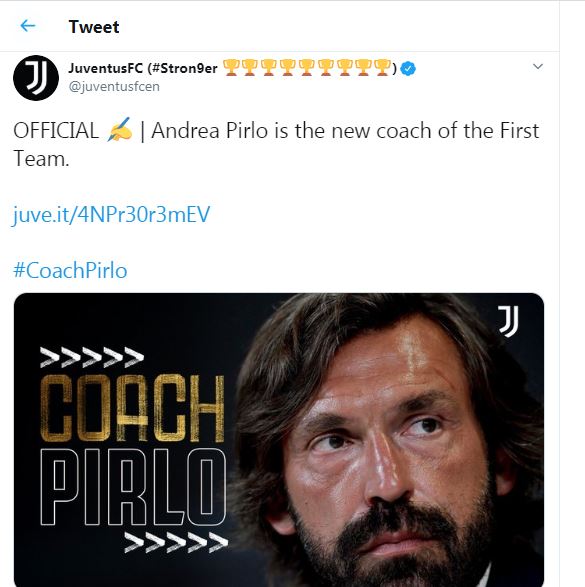 Sarri was dismissed despite leading Juventus to the Serie A title two weeks ago, their ninth in a row.

Sarri told journalists that he would not be judged solely on Friday's match which saw them go out despite a 2-1 win at Allianz Stadium.

Sarri's team have not managed to convince the critics during his first season in charge. Their failure to even match last season's quarter-finals performance in the Champions League added to the pressure on the 61-year-old.

"If I wasn't devastated by not qualifying, I'd be happy with the performance.

"I actually expected less from us, I think we played a great game. We fell behind to a penalty kick that could have made us lose our heads and we had three chances when we were 2-1 ahead."

Sarri pointed out that his side had dropped only two points in the group stage and were unbeaten in the competition until their 1-0 first-leg defeat to Lyon in March before the Covid-19 outbreak interrupted the season for three months.

Ronaldo scored the brace, including an unstoppable long-range goal, to give Juventus the win but it was not enough.

Cr7, teammates and Pirlo must now focus on next season for another UCL title shot.

The Bianconeri have not been able to get their hands on the Champions League trophy since 1996 when they won it for the second time.

Carole is not only a player, but a doctor who attends to teammates and rivals

For over a decade, former Kenya international Carole Okoth has created a place in the hearts of hockey players and...