Financial impropriety and abject administration at the Football Kenya Federation (FKF) is legendary.

Yet the latest chapter, authored over a period of four years under Nick Mwendwa and whose term expired on February 10 but is still clinging on, has the makings of a spellbinding novel on Kenyan football.

The central plot of the novel is a series of disturbing financial mishaps including questionable accounting of Sh244 million for Harambee Stars’ 2019 AFCON campaign and Sh125million from Fifa sunk in an insolvent UK-based company on March 14, 2018. Sadly, the FKF aficionado has brazenly waved away clear-the-air questions as the work of detractors. The denials, often excused as media fabrications, are then followed with a torrent of Public Relation stunts on social media.

The sub-plot that the FKF hopes could turn out to be a much-needed bazooka, are the twin legal attacks on the Sports Disputes Tribunal (SDT), which by its ruling on March 17 crushed the FA’s planned elections the Tribunal ruled could have been a coronation.

The intent and purport of the choreographed elections would have been to return all FKF officials, crucial among them, influential members of the General Assembly unopposed.

One of FKF proxies has since filed a case at the High Court in Kericho against the Attorney General, Chief Justice, Sports CS and SDT – which if successful will dismantle the Tribunal created by an Act of Parliament in 2013.

Murang’a SEAL football club, in documents sign by Standard Sports, has also sought leave of the High Court in Murang’a to have the SDT’s decision quashed, which if successful will return Mwendwa and his brigade to Kandanda House at Kasarani.

However, the seismic tell-all interview by Harambee Stars captain Victor Wanyama over unpaid Sh250,000 AFCON 2019 bonuses per player and neglect of injured players doing duty for the country seems to have jolted the Directorate of Criminal Investigation (DCI) to get to the bottom of what is shaping up to be a fiasco.

Yesterday from 9am, Mwendwa and unnamed former officials spent the day at DCI at Kiambu Road, shading light on the Sh244 million government money advanced to FKF from the Sports, Arts and Social Development Fund. 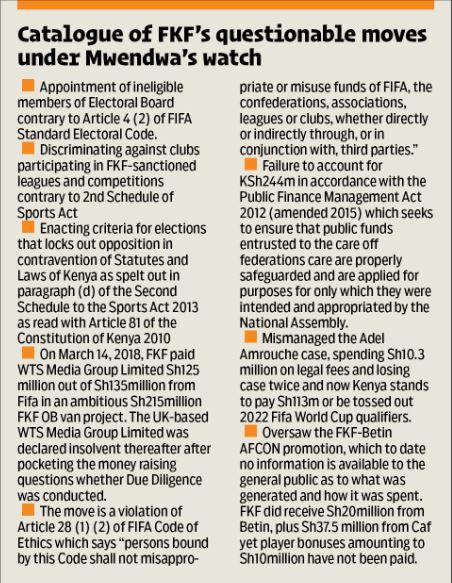 Standard Sports has established that the former Principal Secretary in the Ministry of Sports Kirimi Kaberia recorded his statement over the same last week paving the way for Mwenda’s turn.

DCI officers familiar with the case told Standard Sports: “Mwendwa was summoned following a complaint from the Ministry of Sports over the manner in which the funds were spent

“The detectives also sought clarification on the players’ bonuses.”

The officer added: “Investigations have been ongoing and they are in final stages. “The file will be sent to the Director of Public Prosecutions with various recommendations for action.”

When contacted, former Sports PS Peter Kaberia, who was on record demanding for proper accounting of the AFCON funds before he was transferred to the Ministry of Mining, distanced himself from Mwendwa’s summoning at the DCI.

“I really don’t know why he has been summoned. I can’t really speculate and I have absolutely nothing to do with that,” Kaberia told Standard Sports.

Mwendwa did not respond to our queries regarding his questioning.