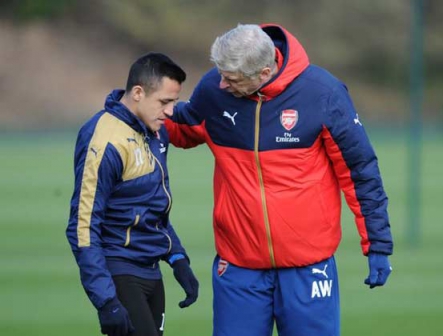 Alexis Sanchez's long-term Arsenal future could be in doubt after he reportedly stormed out of the Emirates Stadium after being substituted during the Gunners' 1-0 win over Norwich.

The Telegraph claim Sanchez has become increasingly frustrated at Arsenal in recent weeks and his emotions boiled over after his 84th minute withdrawal last weekend.

Sanchez failed to acknowledge Wenger after he was taken off and reportedly left the stadium immediately after storming down the tunnel.

The Chilean forward has just two years left on the four-year contract he signed when joining from Barcelona in 2014.

Any hopes Arsenal have of persuading Sanchez to commit to a contract extension will surely depend on whether his reported discontent with Wenger can be resolved.

It is claimed there has been a "frosty" atmosphere between player and manager in training this week.

Sanchez questioned his teammates' hunger earlier in the season after back-to-back defeats to Manchester United and Swansea effectively ended the Gunners' title challenge.

“If we go out on to the pitch with hunger to become champions, to win the Premier League or the Champions League, we can achieve it, to win big things," he said.

“There are great players. I train with them daily and they have got the mentality and the desire to win but we lack hunger, the mentality that we are [already] winning 1-0 when we go out on to the pitch.”

Sanchez has endured a difficult second season in North London after scoring 25 goals during his first season in England.

Wenger believes the attacker's Copa America exploits have played a big part in his struggle for consistency.

“It had an impact on him this season I think," Wenger said on Friday. "After some big achievement like that you always have a bit of decompression. I think he suffered physically this season from that.”

Jamie Vardy scored twice to lead Leicester City's on-field party as they marked lifting the Premier League trophy with a 3-1 win at home to Everton on Saturday, while Sunderland climbed out of the relegation zone.

By Ochieng Oyugi | 15 hours ago

Zarika encourages young boxers to take to the ring

Achieng, the Angel of war, ready for battle
Feedback