Chelimo back in action to race in 5,000m heats tomorrow

Chelimo back in action to race in 5,000m heats tomorrow

After her stunning performance to deliver bronze in women’s 10,000m finals on Saturday, Margaret Chelimo returns to action in the women’s 5,000m heat alongside 2018 World Under-20 Beatrice Chebet and Gloria Kite tomorrow.

Kenya’s Hellen Obiri, the winner in London in 2017 and in Doha two years later, opted to concentrate on the 10,000m where she won silver medal rather than go for a historic hat-trick of 5,000m golds.

With 2015 winner Almaz Ayana from Ethiopia also absent from the Ethiopian entry for the event, a new champion is set to be crowned in Oregon worlds.

Chelimo claimed silver behind Obiri in Doha three years ago – and world U20 cross country champion Chebet, who won the world U20 title in 5,000m ahead of Ejgayehu Taye in Tampere in 2018 alongside Kite, the Kenyan trio will aim to easily sail to the finals and ensure the title remains in Kenya.

“With Obiri not contesting, which I understand because she wants to concentrate on longer distance that’s why she opted for the 10,000m event, I have the task alongside my teammates to ensure we deliver victory to Kenya,” Chelimo said.

The Kenyan charges will once again brace for duel with Ethiopians who are led by the 22-year-old newly minted world 10,000m champion Letesenbet Gidey and Taye who stands on top of the 2022 world list, and fifth on the world all-time list, courtesy of the 14:12.98 she clocked as a mightily impressive winner at the Diamond League meeting in Eugene in May.

Apart from the Ethiopians, Olympic 5,000m champion Sifan Hassan who missed out the medal position in the women’s 10,000m will aim to avenge her loss if she takes the field.

Meanwhile, as he strutted off the high jump mat, Mutaz Essa Barshim flapped his arms like a bird.

It was a fitting celebration, as the Qatari athlete elegantly flew over the bar on each of his attempts on Monday at the World Athletics Championships Oregon22.

In fact, Barshim cleared the bar on his first chance through to the winning height of 2.37m, a world lead. He then attempted to clear the bar at 2.41m but fell short. While that attempt ruined a flawless performance, Barshim had already clinched his third consecutive World Championships gold, the most of any high jumper.

“Three world golds in a row is something that has never been done before. I came here to secure that,” Barshim said. “I know I put a lot of hard work to be where I am.”

Barshim outlasted Korea’s Woo Sanghyeok, who cleared 2.35m to equal his own outdoor national record, and Ukrainian Andriy Protsenko (2.33m) to continue his reign at the top of the high jump competition.

While his jumps seemed effortless, that’s not always how the 2022 season had been for Barshim. After sharing gold at the Tokyo Olympic Games with his friend Gianmarco Tamberi, he struggled to find a rhythm and competed in only two events before the World Championships — failing to surpass the 2.30m mark in either.

While he was unable to string together strong performances, he felt healthy leading up to the competition and it showed in his performance.

“Defending my Doha title and being recovered after injury is the most amazing thing that could happen to me,” Barshim said. “Sometimes it’s difficult to show jumps and techniques that people like and expect to see from me.” [Dennis Okeyo, World Athletics] 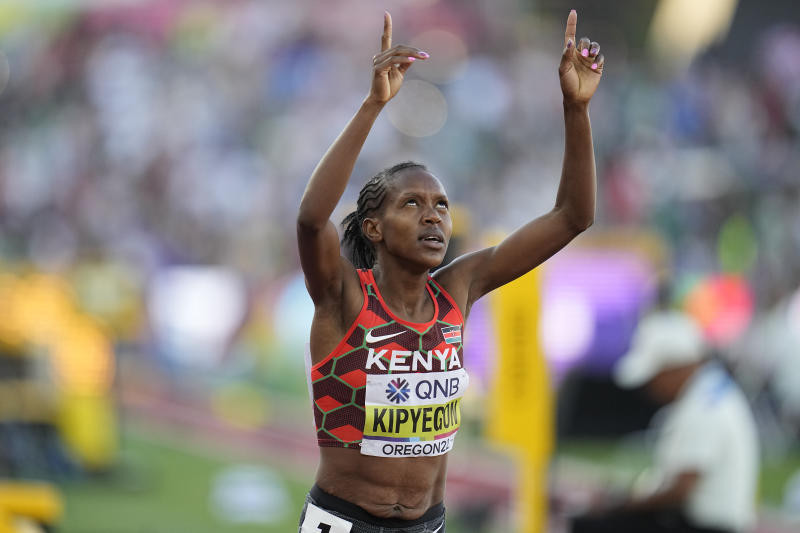