Korir and Kinyamal who were paired in heat one finished first and second to earn automatic qualification for the final with Wanyonyi finishing third in his heat to get in as one of the non-automatic qualifiers.

Korir kicked hard with his trademark head pushing style in the final 100m, cruising past three other competitors in the outside lanes to earn himself a heat victory in 1:45.38  ahead of his compatriot Kinyamal who clocked 1:45.49 to ensure he cruised to the final.

Korir ran a similar race to the one he produced in Tokyo last year to win Olympic gold, chasing down the field in the final 100m.

Kenyans will hope he can win one more race tomorrow morning and solidify himself as the World record holder David Rudisha’s replacement in the two-lap event.

“My goal was to get into the final,” Korir said. “Now, it’s time to recover and get myself prepared for the final, we hope we will be able to deliver great results.”

The Kenyans will, however, have to contain Algerian Moula who has been in superb form throughout the season and won the heat three in 1:44.89, the fastest of the three heats, ahead of Canadian Marco Arop who timed 1:45.12.

It was the end of the road for Kenya’s Noah Kibet who led most of heat two but faded to the bottom at the finish line.

Yesterday was also the end of the road for the 2015 world champion Julius Yego who failed to progress past round one in the men’s javelin qualification after managing a best throw of 79.60m to finish eighth.

In the 5,000m, Jacob Krop, Daniel Simiu and Nicholas Kimeli progressed to the final set for Monday morning.

Now, the question that lingers among the Kenyans is that can the trio end 17-year-old gold drought in men’s 5,000m, which Benjamin Kipkoech Limo last won in Helsinki, Finland, in 2005?

The Kenyan charges will be battling for the podium slots, a race that will also feature three gold medal winners from the Olympic Games in Tokyo that includes Jakob Ingebrigtsen, the Norwegian winner of the 1500m crown, 10,000m champion Selemon Barega of Ethiopia and Uganda’s Joshua Cheptegei’s Olympic gold medal (and world record) distance of 5000m who all sailed to the final.

Simiu finished sixth in heat two clocking 13:15.17, just outside the top five automatic qualification, but the time was fast enough to see him go through.

In the first heat, Kimeli, who has the world leading time over the distance this year finished sixth in a race won by Uganda’s Oscar Chelimo in a time of 13:24.24.

Compatriot Joshua Cheptegei who is seeking double gold medal at the championships after his glory in men’s 10,000m clocked 13:24.47 behind American Grant Fisher (13:24.44) who was second and Ethiopia’s Selemon Barega (13:24.44) in third slot.

Meanwhile, it takes speed to win some of these medals at World Championships.

Speed to hand all of them out, too. A little bit of jumping ability doesn’t hurt, either.

In a new twist at track and field’s biggest event this side of the Olympics, athletes no longer have to wait to receive their prizes. The medals are waiting trackside and, once gold, silver and bronze are decided, presenters position themselves to hang them around their rightful winners’ necks, sometimes while they’re still on the run.

One caveat: They need them back.

These “instant medals” are purely placeholders for athletes to enjoy on their celebration lap. The take-home ones, engraved with their names, get presented in a ceremony later on.

“To have that medal so fast, it’s so nice,” said British runner Laura Muir, who earned a bronze medal in the 1,500m. “It’s surreal because one minute you’re not even across the line and the next minute you have the medal around your neck.”

All part of the plan from Niels de Vos, the executive director of Oregon22. He remembered watching an athlete win at the 2016 Rio de Janeiro Games and receive his medal the next day in a nearly empty stadium.

“From an athlete’s perspective, it’s like, ‘But my friends and family are here today. They haven’t got a ticket tomorrow. I don’t want to come back tomorrow for my medal and not have my family,’” de Vos explained. “Everybody likes this.”

The process involves plenty of advanced scout work. That’s why de Vos, the longtime chief executive of UK Athletics and CEO of the 2017 World Championships in London, brought over a knowledgeable track team from Britain.

Just to help with the task of tracking down euphoric athletes. It’s not as easy as it might seem. Through prep work, they know approximately where someone will end up once a race or field event concludes.

Then, they spring into action.

Like when 6-foot-3 sprinter Fred Kerley won the 100 meters last weekend and took off down the curve of the track.

There, waiting for him, was a much shorter presenter, Cherry Alexander. She reached high into the air to get the medal on Kerley.

The moment turned into a meme on social media.

Sometimes, the suddenness of receiving a medal takes an athlete by surprise. It did with high jump champion Mutaz Essa Barshim of Qatar.

No worries, there’s a ceremony, too. This medal is just a bonus play. Barshim actually took his medal into the stands and placed it around his young son.

“It’s great. My family wanted to come and see it and hold it,” Barshim said.

Then, he handed it back. His permanent one wasn’t far behind.

In less time than it takes an 800-meter runner to finish, a medal can be engraved.

There’s a 3D printing machine — four are used on heavy medal days — located in a room underneath the seats at Hayward Field. There will be around 252 medals engraved and presented to athletes at the podium ceremony.

The medals features a nifty design, with one side a cross-section of a tree and seven rings to represent the seven regions of Oregon. The other side, one of seven different landscape pictures (an athlete can win multiple medals and not have the same landscape). There’s room, of course, for the printer to etch their name.

Really, though, once that instant medal goes around an athlete’s neck, the moment becomes real.

At least, it did for American heptathlete Anna Hall, who knew she had earned bronze but it didn’t fully sink in — as exhausted as she was — until that medal’s arrival.

U.S. hurdler Trey Cunningham enjoyed everything about celebrating with his silver medal on his victory lap. But this takes some getting used to: “The medal kept slapping me in the chest,” Cunningham said, laughing.

De Vos has thoughts on how to expand on the drama. [Additional reporting from AP] 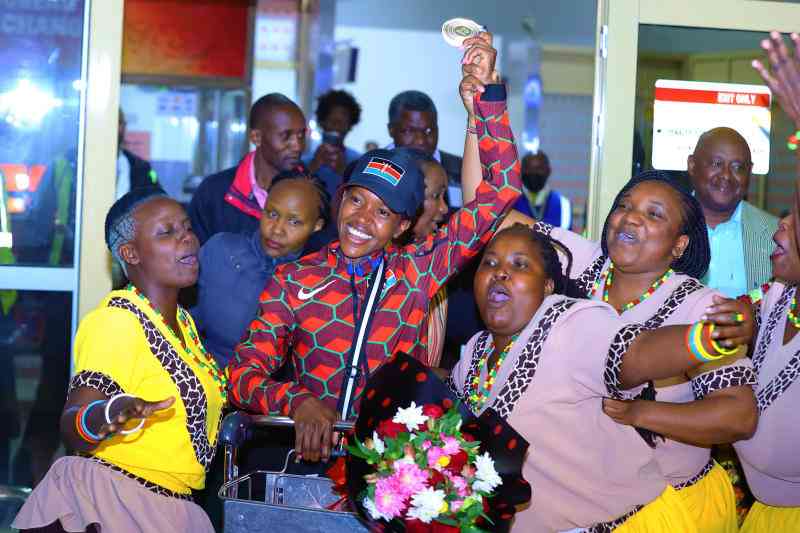 Black Stars coach sends powerful message to Suarez over what he did to Ghana in 2010
Football
By Associated Press
1 hour ago
World Cup official balls need to be charged up before being used in games- here's why
Football
By Standard Sports
3 hours ago
French federation files complaint over disallowed goal
Football
By Associated Press
4 hours ago
Chess: Kenyan juniors star in Africa tourney
Unique Sports
By Ernest Ndunda
6 hours ago
Tough battle expected as Iten hosts first international race
Athletics
By Stephen Rutto
9 hours ago
.